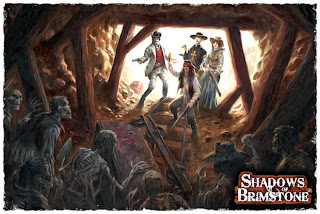 Hi all – I thought I would throw this up on the blog in case anyone is interested.

Shadows of Brimstone is a new dungeon-crawler tabletop game by Flying Frog Production (the guys behind the excellent Last Night on Earth). It is a miniature and card based cooperative horror game that is set in the Wild West - with players creating characters based on classic western stereotypes. A new dark element has been found in the nearby mines which has opened portals to other worlds and is mutating the local wildlife.

The aim of the game is to explore the randomly generated mines and fight whatever lurks within. Players can then link games together into campaigns; visiting the local town to trade and level up before the next game.

Apparently Flying Frog had so much content for this game that they have released two core sets as well as a ton of extras including extra characters, enemies, expansion packs and cards. 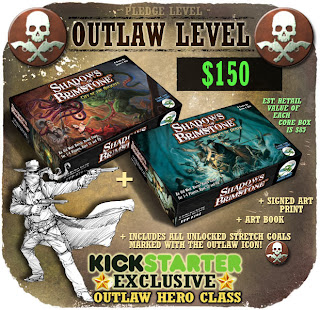 The game is already funded and has raised almost $500K from nearly 1.8K backers after only a few days. I have backed at the $150 level which gets me both core games and all the stretch goals they unlock – which is currently standing at two dozen extra character and enemy minis, additional cards and terrain and expansion packs…and that’s after just a few days’ worth of goals! At this rate I am going to be getting a lot of stuff!

What I will say is take a look at their game and pledge levels – I think the $150 pledge is great value for what you are getting…but I would steer well clear of the comments, which have been taken over by a dozen or so ‘backers’ who have been moaning (literally) every minute since launch and under the pretense of the greater good (come on people – take a look at what’s on offer, decide for yourself if it is something you want to back and vote with your wallet…). Those few people have now created a really air of negativity and I hope any prospective backers are able to look past it and support what I hope is going to be a great game.
Posted by the 6th degree