Finally I have finished the other squad members of the Relictors Centurion Devastator Squad. These models have grown on me quite a bit and were fun, although took ages, to paint. They are packed with details and an part constructed methodology I think is best. I constructed the body, legs and arms as one piece, guns, pipes, head, both sets of shoulder guards, groin armour and pistons separately.

I've also added an Aquila above the Sergeant's head to give him some more height when compared to the other two. That was not there in the last post about him. I think they look good together, somewhat better than I was expecting - they don't scream 'teletubbie' Marines to me anymore! 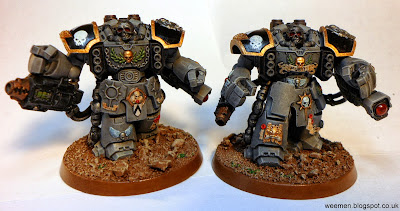 Here is the two remaining troopers in all their freshly painted glory. I think I did a good job on the Grav-Amp lens, again these are packed with detail, I was even tempted to use some of the spare honour markings in the box to cover the one remaining knee armour on the right-hand marine! But, instead, I left at least one armour plate bare. 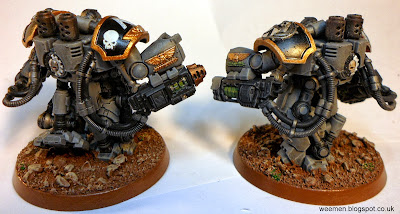 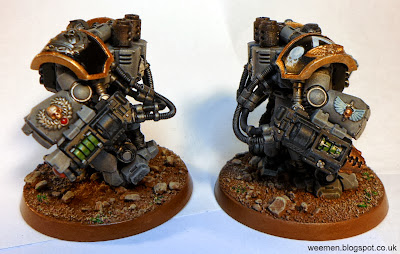 Thanks for stopping by. Right, where is that Stalker tank... should only take as long as one of those did!?
Posted by Siph_Horridus