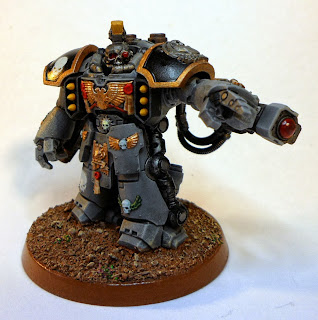 Hello avid readers, thanks for stopping by. Here is my latest offering and addition to the ever growing Relictors Battle Company! I know I should just get on with the remaining Command Squad and be done, but new rules, new models and new Codex means more new shiny bits of kit for the armoury! 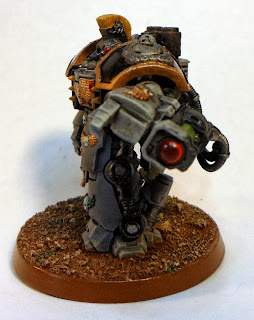 This Sergeant is armed with the Grav Amp seen here, and a rather pleasing lens effect I thought. 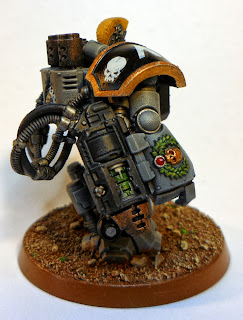 ...And a very much sought after Grav Cannon. I tried to do something different with the muzzle - bronze effect so it stands out but no charcoal burnt effect as it is a gravity enhancing weapon, not a chemical 'burn' type, this will also mean that the various Grav type weapons amongst the line troops - Grav Gun and Combi-Grav Bolters and Pistols will be easily distinguishable from the other boltgun, pistol or special weapons I already had. The green energy drum-thingy will also help a lot too. My plasma guns have a blue energy. 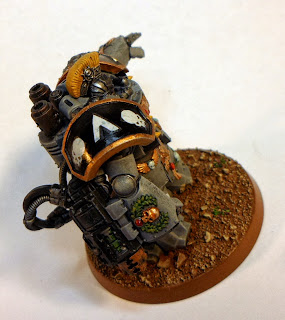 I chose to simply decorate the shoulder pad with the Devastator marking as well as front and back Relictor skulls, and left the left-pauldron blank with the exception of the Centurion badge - done in Boltgun Metal as the Terminator Crux on my Termies is also metallic. 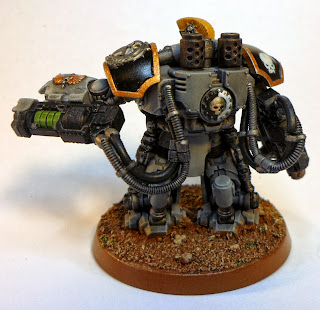 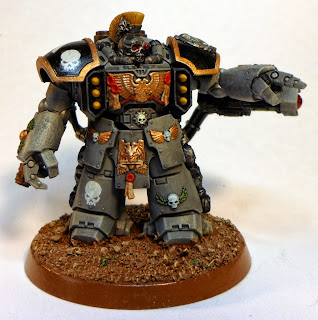 And finally, the chest mounted Missile Launcher, with yellow missiles to tie in with my Whirlwind and Deathwind Missile Pod missiles, to be common across the army. The skull-like head is from Anvil Industries and is painted similar to one of my Assault Marine Squads with similar grimacing heads. And the pose of this centurion is the most static, I managed to get some movement out of the remaining squad members, but the Sergeant can stand still and direct their fire with the pointing gesture nicely. 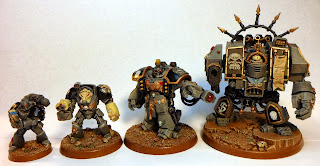 Here is a size comparison of normal Power Armour, Terminator Armour, Centurion Exo-Armour and a Dreadnought. Great stuff, can't think why GW didn't have one of these shots in the WD? Nevermind, thanks for reading, I am progressing with the rest of the Squad, and a Stalker AA Tank...
Posted by Siph_Horridus