So myself and LordHalfpenny have returned back to our normal lives after weeks (ok...less than an hour in my case) of preparation for Blog Wars 4.

Yet again, Alex from From The Fang, held a great tournament – with many of the participants now being regulars and I recognised a lot faces (although I‘m admittedly, really bad with names).

My Iron Warriors are nowhere near ready for playing yet, so I took my ‘Nids (list here). I’ve got to admit, that through no real fault of their own, I have gone off them a bit; they really need a complete overhaul painting-wise, I am now focused on the Iron Warriors and these were a bit of an unwelcome distraction and after looking at some of the lists, a lot of folks were taking advantage of allies and the overall competitiveness seemed to have increased – something ‘Nids don’t get to do.

Despite this, I rolled up bright (read cold and dark) and early, just a little exhausted after a late night and untimely drive down south. I found my table and waited for my first opponent to turn up:

Game 1: Necrons
I’ve only played Necrons once and it went well, so I was (stupidly) optimistic...until I read the name on my opponents shirt...Dave Symcox...of the 40KUK podcast and the England ETC team. Oh well, that’ll be the first game lost.

And lose it I did! Dave brought Oberon, a shed-load of Wraiths, some Croissants and shooty-tank things (maybe I shouldn’t have been so confident against Necrons...). The mission was objectives and I set up to be able to jump on three in the middle straight away and go from there. Then the Wraiths hit and tied up my army for most of the game (a 3++ and W2 really annoys monstrous creatures). The definite low-point, other than having the worst rolling of any game I’ve ever played, was Swarmlord getting Mindshackled and beating himself to death for three turns. I was tabled by turn 5 – but Dave was a great opponent and it was useful watching someone play who knew exactly what they were doing. I also think I might be in an interview in the next 40KUK podcast – so keep your ears open.

Game 2: Squats (Imperial Guard)
This game was against Grazers Squat army that I’d been hearing about since the last Blog Wars – and it was awesome! Grazer quite rightly won the best painted army award. The game on the other hand didn’t go in Grazers favour and despite being initially worried by his 5 tanks that spewed out high strength/low AP large-blasts and it being the first game of Relic I had played – things went really well for me.

The Swarmlord managed to grab the Relic by turn 2 and his psychically-buffed unit was able to hold it for the rest of the game. The Flyrant worked perfectly; picking apart the armoured contingent, as my Gants, Tervigons and Dakkafexes marched up to the Squat front-lines and proceeded to eat their face. I managed to only lose the 30-odd Gants I spawned as meat shields and a Hive Guard brood – the rest of the army was still alive by the end of the game on turn 5.

Grazer was a great opponent and the game was hugely fun and cinematic as the little Squats bunkered down behind their Aegis Defence Line as the hordes swarmed in.

This was the final (and most fun) game of the tournament for me – against The Damn Dice’s Bennet Morley. Bennet was rocking Njal, a unit of of Long Fangs and a ton of squads in Drop Pods with an Aegis Defence Line. The game was Kill Points and in an effort to reduce the number of easy points, Bennet decided to carry out the very fluffy and noble tactic or hiding all his units in a blob, defended by the Aegis and waiting, whilst dropping empty Pods in the far corners of the table...lol. Alex the TO (a long-time Space Wolf player) confirmed that this was in fact, a tried and tested Space Wolf technique that had won many a battle on Fenris.

The game went as you would expect – the ‘Nids plodding forward taking their hits and losing a few Kill Points (about 9), until finally in turn 4, they hit the front lines and overran the cowering space puppies! The next two turns was a nail biting back and forth of me trying to catch up with the kill points and Bennet minimising losses and praying for the end of the game. Those last turns were frantic as I wiped out whole squads in his deployment zone – to realise that his Drop Pods were in my deployment – negating Linebreaker VPs. The final turn came down to Swarmlord and Njal face-to-face...obviously Njal died before he even knew what was happening, scoring me 3 VPs and taking me in the lead! With only a couple of Marines and a Rune Priest left, there was no way for the Space Wolves to catch up...was there? Oh yes – an against-all-odds Jaws of the World Wolf, which wiped a Dakkafex and Tervigon off the board and pushing Bennet ahead for the win by 1 VP! 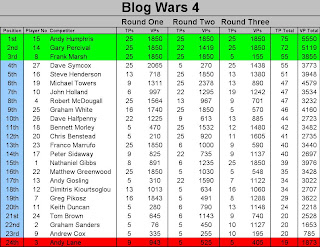 At the end of the day I ended up in the mid-table, with 1-0-0...so at least I’ve been consistent across all the Blog Wars events. Congrats to LordHalfpenny, who finally took the shrinkwrap off his Daemons and impressively placed in the top 10!
Posted by the 6th degree