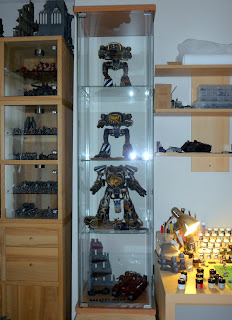 Don't worry, nothing as drastic as selling them, (Never!!), just wanted to show off the new display case for the Titans. Up to now they were sitting on a bookcase with a FW plastic bag over their heads to keep the majority of dust off, now they have a shiny display case, courtesy of Ikea (£40 - Beech and Black wood styles). 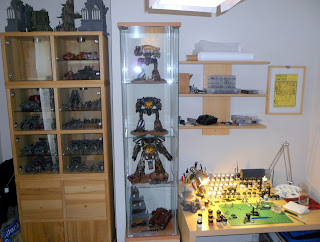 While I was at it, I thought I'd update you with the Man Cave, Relictors and Guard on Left, Titans, Hobby Desk with lights on right and a 1st Edn White Dwarf Number 1 from 1977 in the frame... Pornstarjedi has one too, I bought as a birthday gift a while back.

What isn't shown (just see top of bottom left) is the HUGE pile of FW goodies and a Necron Army all yet to do... I am so slow at this painting lark.
Posted by Siph_Horridus