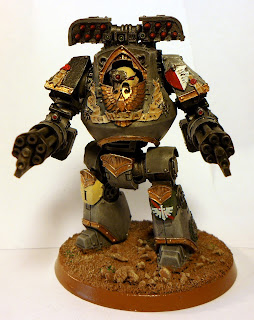 The latest addition to the growing Relictor Battle Company armoury, a Mortis Pattern Relic Contemptor Dreadnought. With the growing number of flyers around in 6th Edition, my Relictors were in need of some dedicated Anti-Air, but also in need of some serious firepower, the natural choice was a Mortis Dread with Kheres Assault Cannons and Krak Cyclone Missiles, 12x S6 shots with Rending and 2x S8 Krak for downing the pesky flyers. 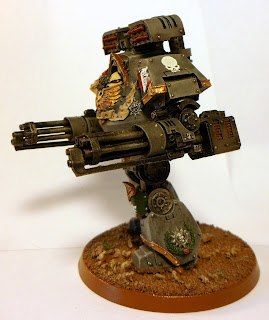 If he doesn't move, he has the Skyfire rule, if no flyers are around, he chews through transports and squads with ease. By bitter experience, he can also penetrate the odd Landraider or two... 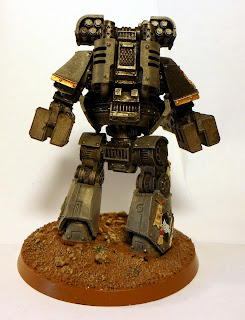 And front armour is AV13, 3 Hull Points, 5++ Inv Save to shooting attacks and quite good in CC, 2xS7 attacks with 6++ Inv Save. As our last battle (Pornstarjedi will delight in putting up a Batrep soon) he took out a Bloodthirster in CC! Much to my delight but also Pornstarjedi's as the rest of my Relictors crumbled around him...  :( 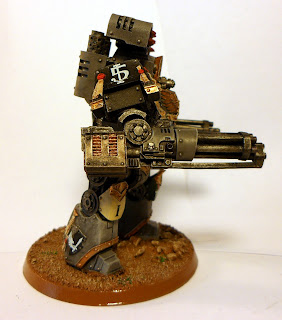 He, like his Brother Contemptor were Dark Angel relics recovered from the battlefield, hence the Knee Pad and Ravenwing leg greave motif... Contemptors were pre-heresy builds and Relictors were formed post-heresy from Dark Angel and Ultramarine genestock, but scour the battlefields looking for Relics (hence Relic-tors). He has now been interned with a badly wounded Relictor veteran pilot and honours his past lineage with his former Dark Angel Chapter badges. I painted him in two sittings ahead of the latest battle with Pornstarjedi's Daemons... I'm rather pleased with the result and another one of my numerous FW purchases finally completed.