Well, BlogWars3 was a great day gaming last saturday. I have had a week back at work and wish I could be gaming again for the win. Nothing like a good day's gaming, followed by another at Warhammer World with Pornstarjedi's Daemons, to get the hobby juices flowing again. My list was a Vulkan Hestan Vanilla SM List found here. Lots of twin-linked Flame and Melta goodness - ideal for anti-mech - none of the lists I went against could be described as Mech! 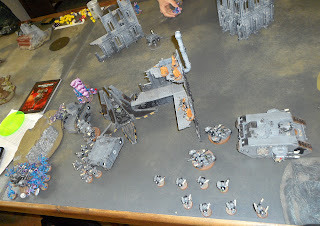 The first game was against Grazer from Claws and Fists Blog, nice chap, great game against his Nid's deepstrike and outflank list. It was an Annihilation with the Force Commander being 2KPs if they die. (Doom and Vulkan) As you can see from the phots, his stealers caused mayhem in my back lines, the Rifleman Dread won me this game holding up a pack of stealers in CC for 3 turns! And a great shot from my Landraider sniped the Doom Of Malantai on his arrival - dead. 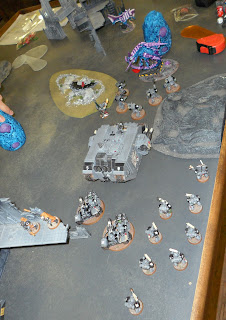 His list was up in my face at the start, but the Ironclad took on the Tervigon in CC and won, the Tyrant Paroxyism-ed Vulkan and his Termies in CC and still died, the pods were taken out by TL Multi-Meltas and Gants and Dakka Fex died to mass fire. 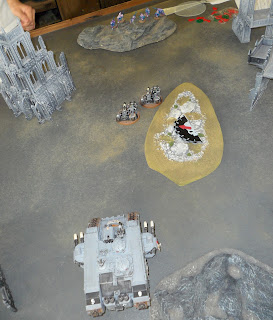 Grazer was left with a squad of Gants hiding on the baseline and a squad of Stealers in my back lines, slowly being sniped and picked off. 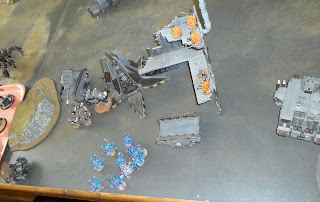 Here is a shot of Grazers awesome looking Nids in full 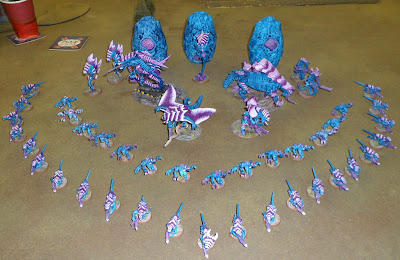 The game ended with 25TPs to 5. Relictor Win. Lots of VPs to me.

The next game was against Buckaroo Mathammer's Ian King SM Shrike and Scout heavy army, another Fleet/Infiltrate in your face army. Ian was a great opponent, he knew his stuff, and an unusual SM army, pictured above - I liked it. I wasn't expecting this. Mission was Table Quarters with Commander Scoring. But my plan hinged on getting the Shrike squad in the open for a turn and unleashing hell at them. Ian played well, Scout moves at the start saw my army engaged in CC with CC armed scouts from the start, it hurt. The Scouts elsewhere were picked off as necessary whilst trying to acheive the main aim - it worked, turn 2-3 saw Shrike unengaged after he had chewed through 2 full Tactical Squads and a Dread so all the Relictors that could shoot them did, and Vulkan and his Termies finished him off in CC. The LR and MM Attack Bikes dealt with the Whirlwinds. The game ended with 2 squads of Scouts hiding it out against a Landraider and Attack Bike picking them off. The quarter with my Vulkan was mine (x2), all 3 others were contested and lots of VPs again. 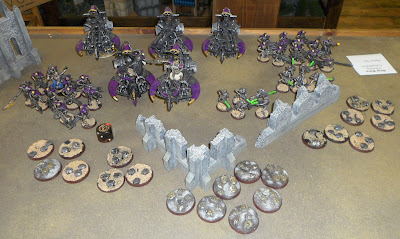 The two high VP performances from the first two battles saw that I was on the top table (!!) against last year's Champion, Venerable Brother from Sons of Sanguinius, a really nice bloke who is a great player. His Necrons are pictured above. It was an Objectives Game, 5 of them with Dawn Of War set up. 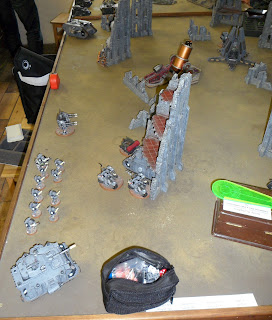 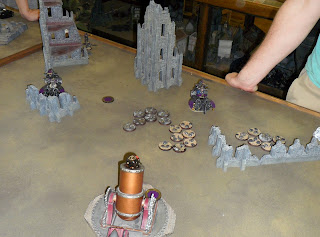 Even though he had posted on the blog how to defeat his army, it took mine apart piecemeal. AV13 vehicles at range outside my Multi-Melta sight, 3 turns of Nightfighting (Dawn of War plus 2 Solar Pulses) and some armour eating Scarab Swarms eating through my armour! Plus two Lords on Command Barges with S7 2D6 Pen Warscythe hit-and-run tactics on my tanks and Dreads meant I was outgunned, out manouvred and out of the game... it was fun but the dice gods favoured Venerable and I was back to rolling ones. Ha Ha. Not to take away from his generalship, he is a great player and deserved to win - he did. Tabled pretty much and Venerable went on to win the BlogWars3 Tournament. I placed 7th after this big loss, but it was an excellent end to a great day.

Thanks to Alex from From the Fang for organising... I see BlogWars4 is going ahead in October, I will hopefully attend with the other Weemen. 4 BlogWars from 4 - we are becoming BlogWar Veterans. Come join in the fun. See you there - hopefully!
Posted by Siph_Horridus