I’ve had a busy weekend of pinning, greenstuffing and gluing – but the Swarmlord is built and ready to be painted.

The legs were already built, but I also had to tackle the mandibles and the split tail. 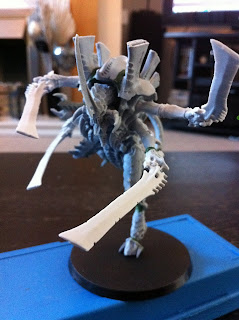 Starting with the mandibles; after digging through my bits box looking for some suitable spikes/horns, I finally settled on the spikes that were included in the Tyrant Lash Whip sprue (typical that it’s the last place I look). These are pretty much the perfect size to have a pair mounted on each side of the mouth – without looking stupidly large. At this stage I also noticed that the hooves have mini talons, so I found some more spikes (clipped from the gaunt armoured shell biomorph bit – ‘Nid players will know what I am on about) and added them. 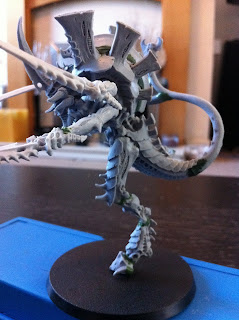 Next up was the split tail… In my bitz box I managed to find a rounded-tube shaped sprue branch that was the same diameter as the existing tail. I then clipped the end of the tail off of a spare Carnifex tail and pinned that on. Some more spikes and a bit of basic greensuffing and the second tail was done. It was then just a matter of attaching it to the existing tail and using greenstuff to blend the join.
I’m not great with greenstuff – I can pretty much fill gaps and add a little detail, but I a pretty happy with the work here. 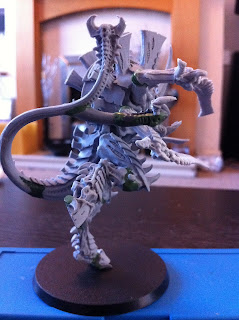 I am loving the pose – it looks really nimble and graceful; especially with no other models to give it scale. Put a marine in front of it…Draigo for instance (I bloody hate Draigo) and it looks like it could kill anything! 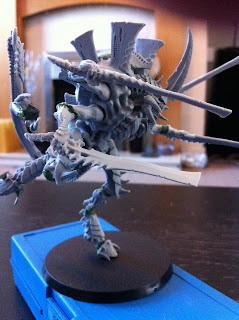 Everything managed to fit together and despite standing on a single leg – the centre of gravity is bang in the middle, so there is no problem with the models balance. 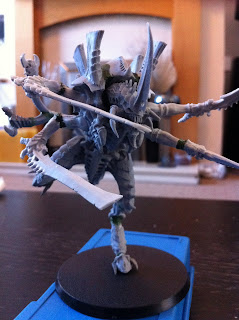 Next up – basing and painting.
Thought I would give a quick shout out – whilst I am modifying a standard Tyrant to be my Swarmlord; Warfrog is building an absolute beast of a Swarmlord from a range of ‘Nid parts and it is shaping up brilliantly (he's a lot more sklilled than me). Check it out on his blog.
Posted by the 6th degree