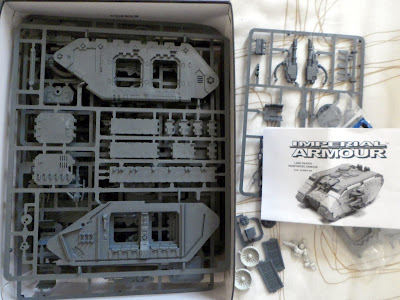 Thank-you for everyone who voted on the poll in the sidebar over the last few weeks, and the majority wins. I will be making triple side sponsons. I rather liked this look when I first saw it so I am glad that is the general concensus too.


I have already purchased a Razorback for the Lascannon Fwd Turret, and a Godhammer Landraider for the body. I have some vent gubbins as well as an aircraft turbofan assembly to make some sort of cooling fan assembly (lots of lascannon generators inside) and Sergeant Relic-taro Chronus will make an appearance as his BS5 and ignore Shaken or Stunned results will be of great benefit!

It will also have the FW Extra Armour kit, befitting of it's Anti Tank role - and it 'beefs' it up a little too.

I'm back to work soon, so when this will get finished I don't know, however I will post progress as it happens here.

Thanks for reading.
Posted by Siph_Horridus