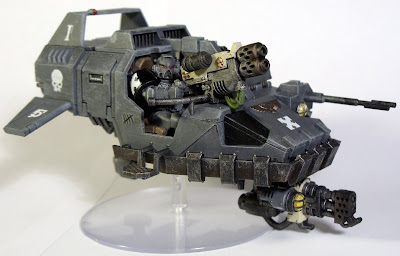 A bad spell of snowy weather meant I wasn't able to drive the minor back roads to work hence, I completed the Landspeeder Tornado a few days earlier than expected. Here she is in all her grey glory. I chose Muli-Melta as a tank killer because the Landspeeder has the movement to outflank armour whilst the Heavy Flamer is there as a cheap back-up passenger/troop killer, again long ranged weapons are wasted on this fast baby (and assault cannon expensive). For only 70pts I have a deep striking, fast skimmer tank killer! Looks mean too. The '5' is for the 5th Company, the 'I' is for the vehicle number. The reverse of the wings has identical markings too. 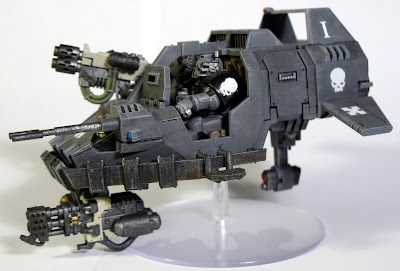 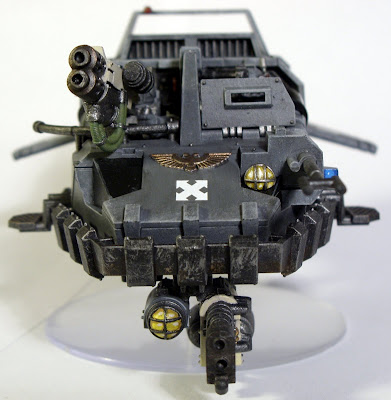 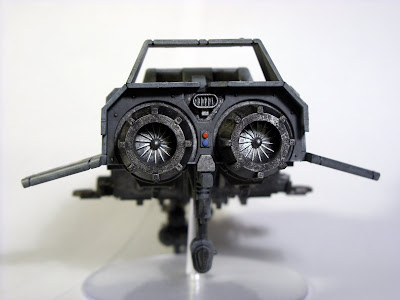 The red and blue lights on the rear echo those on the standard marines backpacks (see earlier Tactical Squad posts) and the Terminator rear waist (have a look yourself). These all tie the army together. This was the newly cut Plastic Landspeeder kit which came with lots of weapon spares I've flogged on ebay and recouped about £5 of the initial £18. The cockpit design gives a large scope for personalisation and lots of buttons to paint in, however after completing the model - most of my hard work is obscurred by the two Battle Brothers! Oh well, at least I know it's there. You might be able to pick out the detail in these following shots. 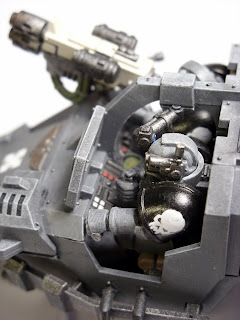 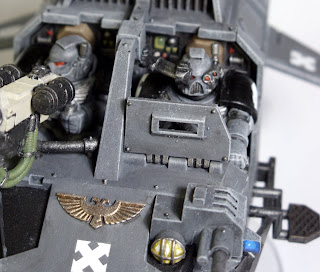 Oh, two minor points. Be careful of the crew steps, they might look identical but they are slightly angled for a left and right fit over the bumber/fender. And, the Tornado can only be mounted on the taller flying base strutt, the lower one means the underslung weapon drags on the deck. Doh.
Posted by Siph_Horridus