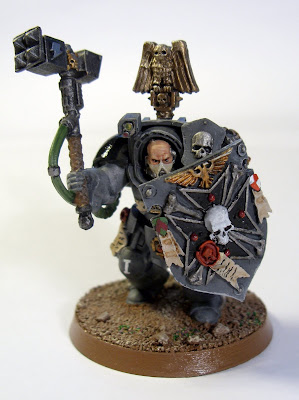 I have been quietly plodding along since the completion of those Landspeeders, one or two projects on the go (as always) but thought I'd post a taster from my up and coming Terminator Assault Squad.

Here is Sergeant Abela. He has a FW Black Templars Storm Shield and a top of a Crozius Arcanum instead of a banner to mark him out from the rest of the squad (yet to be assembled). Banners on Close Combat troops don't make sense to me, so a nice figurehead instead suits his style of melee fighting.

I tried to dampen down the Templar's cross by only painting it Boltgun Metal with a few Badab Black washes and highlight up the skull icon in the centre with Fortress Grey and Skull White to echo the Chapter Badge in order to draw your eye to that part of the overall design. Hopefully you think Relictor first before thinking Black Templar. 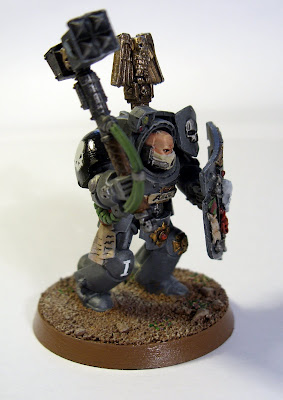 The bone colour respirator/comms is due to him coming from the First Company, and indeed Insignium Astartes design of bone (similar to White for Codex Chapters etc.) coloured helmets for 1st Company Veterans.

The Thunder Hammer has been given a wash of Asurmen Blue to give a slight 'power' look. Flesh tones are Dwarf Flesh, Ogryn Flesh Wash and Elf Flesh highlights. As always, the blue and red 'lights/antenna/sensors/indicators?' are the same as those on the rear of the Landspeeder and on the front of the Marine Backpacks, just behind their heads. 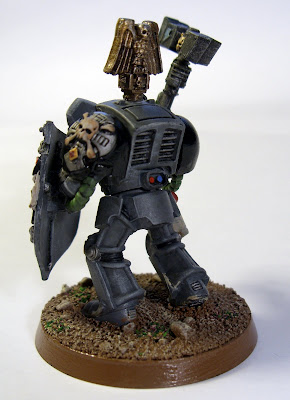