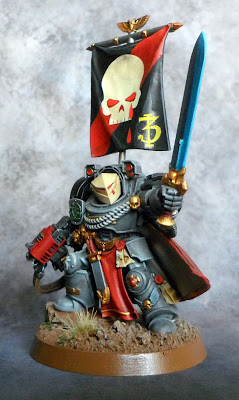 Hello All, thanks for dropping by. This is the Terminator Captain from the Army Boxset which then became the Deathwatch Terminator Captain. I have however replaced the inscribed blade which I thought was too thin with the blade from a Gravis Captain and added a head swap for a helment from Dreamforge Games Valkir Heavy Troops. 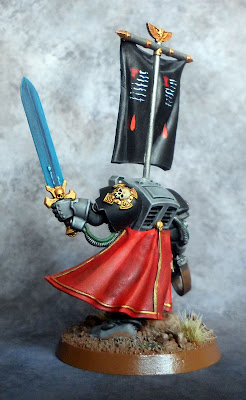 I think the banner was from the Venerable Dreadnought kit, anyhow I've made him a Captain of the 3rd Company, Brother Captain Theol, as I already have far too many Captains from the 5th and a few from the 4th... the backstory for this Captain is that he has lost the 3rd Company to the persecution and execution of the Inquisition and Grey Knights - tasked with hunting the Relictors for being Excommunicate Traitorious, only the Relictors know they are Loyal - they might just experiment with Chaos a bit to better understand it and fight Chaos better, a viewpoint not shared by the Inquisition... His tear drops on the Helmet and the Banner is to reflect this great loss and sadness. One tear for his beloved Company, one for the Emperor's grief of the loss of loyal sons, and one for himself - knowing he cannot and will not be able to exact revenge on his Brother's killers, as they know not what they do - soon it must be revealed to the Inquisition that the Relictors are loyal sons. 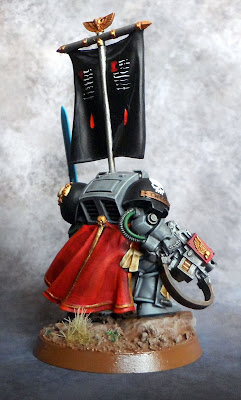 I chose to add some red flourishes to link him with the 3rd Company colour, by rights I guess Terminators should be in 1st Company, but Characters can choose to fight however they wish - High Command is not taking any risks with Capt Theol, he fights on in the relic Terminator Armour to preserve 3rd Company! 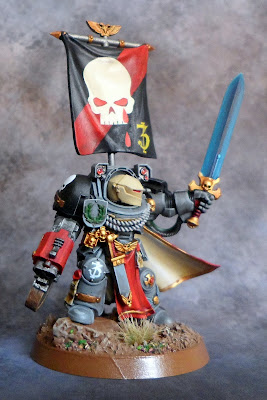 I really enjoyed painting this mighty hero, a lot of nice details and the miniature went together really well. I like my addition of the Knightly Helm, adds to the crusading Knight feel for this individual, determined to let the spirit of 3rd Company live and fight on through him. 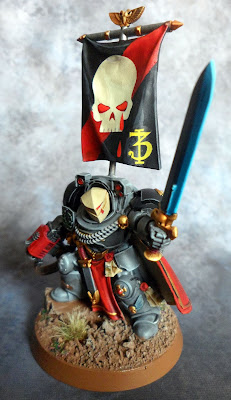