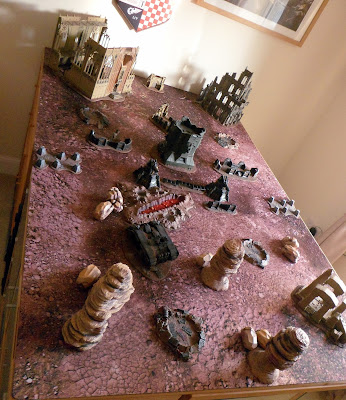 Hi all, thanks for dropping by, I had a great narrative driven battle from the BRB, Blitz Scenario and thought I'd share some of the pictures and highlights. Not a Battle Report per se, they take ages to do and capture during the battle so rather than capture every move and what died etc. we just had fun and tried to remember to take a few photos along the way.

Above you can see the terrain set up, I did this envisaging an Imperial City and the borderlands, without rolling or deciding the mission first - by chance when my opponent arrived he suggested something along those lines and I looked in the BRB and found the Blitz scenario - one attacker, one defender, attacker won VPs if units were in the two Defender Deployment Zones, 1 VP for the Bunkers area, 2VPs each for the City zone. The Defender got a VP for every unit destroyed and Sustained Assault rules were in force - this suited our two sides, endless Necron Legion, Blood Angels defending the city... 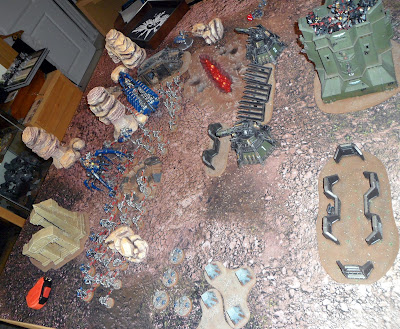 The Necron force started in the desert, in the first 18in zone, then there was a 18in buffer I had to cross before getting to the Blood Angels front line. The Blood Angels would have to be cut down and win through attrition. 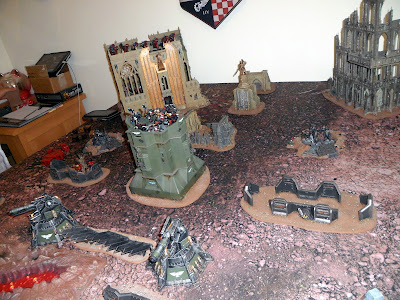 The Blood Angels had half their units in the foremost deployment zone, Death Company, Lemartes, Scouts and Reivers. In the city there was a BA castle, characters, two Relic Scorpius, Hellblasters and Ancient and Sanguinary Priest - lots of re-rolls, feel no pains and healing. The game opened up with a preliminary bombardment (1CP to make on targeted unit be hit on a 4+, the rest on 6+), the only unit to be hit was the Hellblasters atop the Imperial Sanctuary at the rear, on the 4+ dealing 3 mortal wounds due to 1CP spent on a stratagem to give dug in and half the potential damage from D6 to D3, killing one Hellblaster. 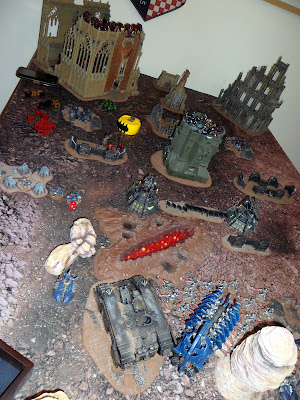 The turn one casualties were mainly the Reivers and Scout Squads, the Blood Angels killed two whole squads of Destroyers with effective Hellblaster and Scorpius fire. (BA 2VPs) 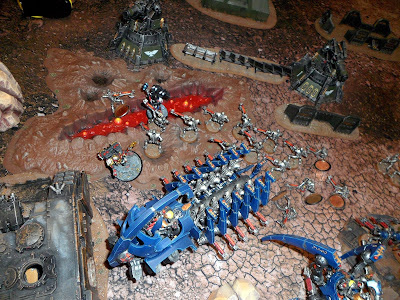 In Turn two the Necrons closed the bastion taking down a few Death Company and moved towards the scoring zone, more Scouts died. The Blood Angels hit back, Scorpius was really deleting two units a turn, at first we thought it would be an easy Necron win but as time went on and the castle was unopposed it looked like a close call. The Blood Angels killed more Destroyers and Destroyer Lord before Lemartes and Death Company charged into the Warriors - more dying to massed Gauss overwatch but Death Company hit hard and many warriors fell. (BA 4VPs) 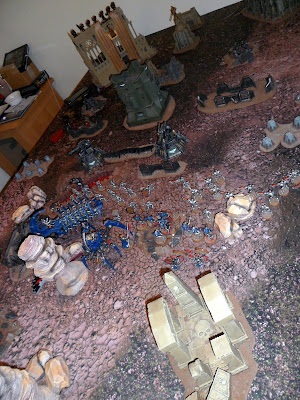 Here the Necrons can be seen on the relentless advance towards the city frontline. The Warriors in battle with Lemartes fall back and Lemartes and the Death Company are cut down (retires from the field...) 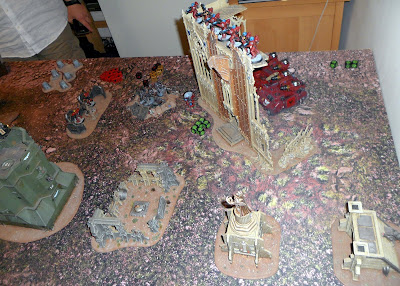 The Blood Angel castle, uncharacteristic for blood thirsty vampires, stayed back and poured fire into the advancing constructs. 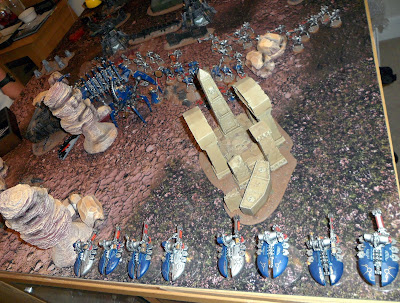 The sustained assault dice were kind to the Destroyers, both squads coming back on a 4+, which would be great as they move fast and will still be able to move up the 36in to the frontline. (BA 4VPs) 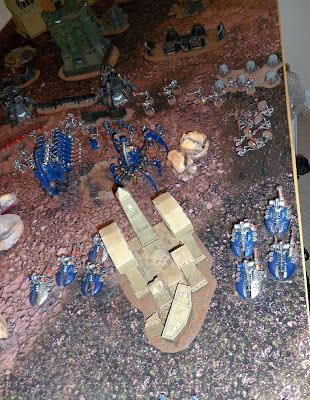 In Turn three the Necrons moved ever closer, one swarm of Canoptek Scarabs scuttled up the board edge into the rear of the Blood Angel lines, if they reached the city at the end of the battle it would be 2VPs. The Destroyers at the rear advanced as far as they could. 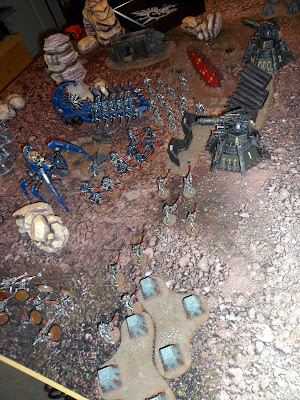 The Warriors making it to the front lines were subjected to withering fire, thinning their numbers but hopefully reanimation protocols will replenish the numbers. 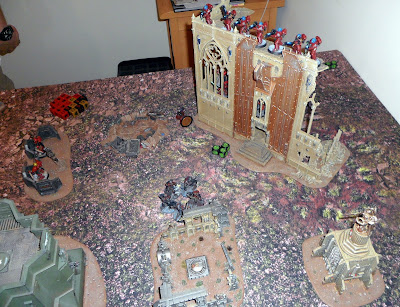 Necron Heavy Gauss cannon several times sniped at Hellblasters, but Feel No Pain and the Sanguinary Priest meant I found it hard to reduce the numbers, I think during the battle the same hellblaster fell and rose again 3 times! 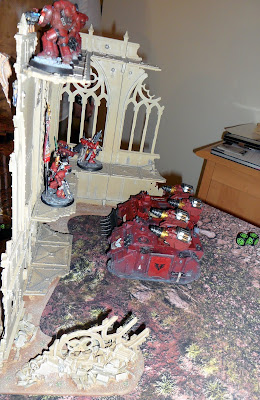 The Scorpius' were exacting a heavy toll on the advancing Necrons, wiping out most of a large Warriors squad but the Legion continued to close... (BA 4VPs) 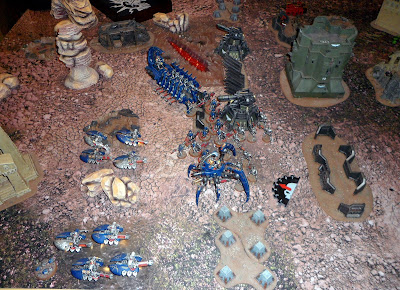 In Turn four, the implacable advance continued under the guns of the Blood Angels, more Necron Units reached the Imperial lines, the Scarabs having been wiped out in combat by the last remaining Reiver sped up the board and were eliminated by exacting Scorpius fire. One remaining Scarab base that was in the BA deployment area reached the relative safety of the ruins - only the Scorpius could reach out and remove but they had choicer targets for now. 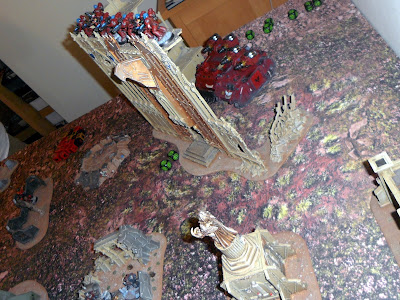 The Blood Angels holdfast in the Imperial Sanctuary, exacting a revenge for the fallen Scouts, felling the Warriors Squad and the Destroyer Lord. (BA 6VPs) 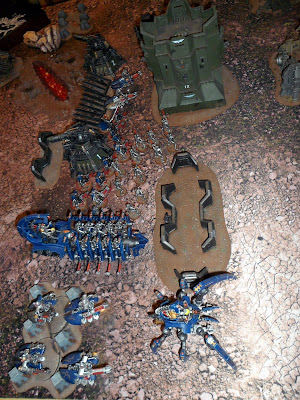 In Turn Five, the Necron hordes reached the lines and spilled over the fortifications, including 2 single Scarab bases, the furthest base in the ruins giving 2VPs, if the game ends now the Necrons have 10VPs... 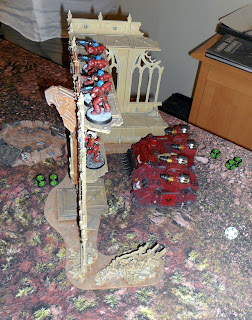 The Blood Angels open fire for Turn Five, Hellblaster fire takes a few automatons down but each Scorpius puts its cross hairs on the Scarab bases and easily (3D3 but if stationary 6D3 shots S6) wiping out the 2VP base in the ruins and another base at the Tank Traps... leaving 8 Necron Units in the first Deployment Zone. (BA 8VPs, Necrons 8VPs if the game ends)...

We roll for game end and roll a two - its a draw! That was a great game we both really enjoyed. The Blood Angel castle with two Scorpius is a deadly combo, but now with more ideas of how to counter it, I think I will have to get painting some more Wraiths and some deepstriking units to breach the castle!

I hope you enjoyed the report and pictures. Cheers, Siph.
Posted by Siph_Horridus