Hi Readers, thanks for dropping by, 5 more from the Battleforce done, now the 5 additional Warriors for the 4th squad, that's 45 done now. no more left, thank goodness - now to move on to more elaborate Infantry such as Praetorians or Lychguard. The intention will be to field three 15man squads, or 3x10man squads and a larger 15man squad - maybe with a Lord with Res Orb to make them hang around longer. Now the 8th rules for RP rely on a larger squad number, I may have to paint some more! 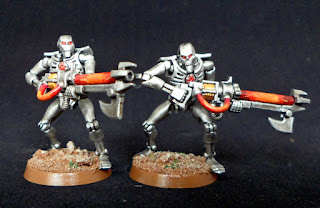 I copied the same scheme for the rest of the Warriors I've done so they blend in seamlessly, makes it easier when choosing my forces for upcoming battles, just pick however many soulless automatons I need... all 45 were used in battle at Warhammer World after Warhammerfest, and they showed their resilience by sticking around in the face of 6500pts of Ultramarines! 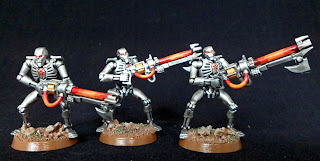 The copper capacitor coils are Fulgurite Copper. These are my basic Necrons so they lack any Blue or Gold accents, but the metals are actually more than sprayed! Its Platemetal AP Spray washed with Nuln Oil and Agrax Earthshade and highlighted Runefang Steel. 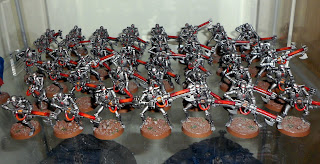 Finally, a shot of the whole phalanx of Warriors. I think that might be enough... actually with 8th, I may now have to get more - 20man squads for the juicy RP! Thanks for dropping by, cheers, Siph.
Posted by Siph_Horridus