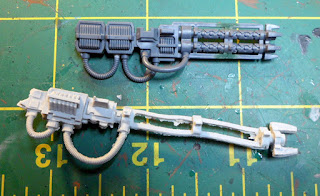 Hi Readers, well what can I say. I bought these Heavy Gauss Cannons in the height of 'Failcast' epidemic, they were bad... then sat in the closet of doom for years until I did some research. I saw this Heavy Gauss Cannon Conversion on You Tube, but I never have spare Immortal Gauss Blasters, but what I might have is spare Tomb Blade Gauss Blasters - so taking inspiration, from this tutorial, I made the following. 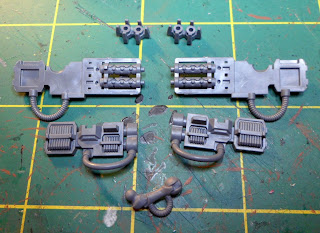 The good thing is, if you arm the Tomb Blades with Particle Casters or Tesla Carbines, you have a pair of Gauss Blasters spare. Also add an arm from the Destroyer kit. 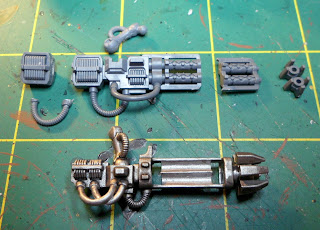 I used the right hand weapon, cut up the left hand weapon to add an extra capacitor ring, cable and barrels. You can extend the barrels a little more if you cut further back as seen below. The normal Gauss Cannon is shown for scale, you want to be bigger than these to show the Heavy Destroyer. 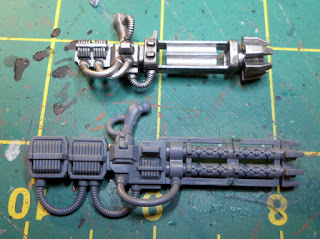 Once glued together, the small indents were filled with green stuff. I think the extra capacitor coils on the end do it justice and show that this is an anti-tank powerful gun. 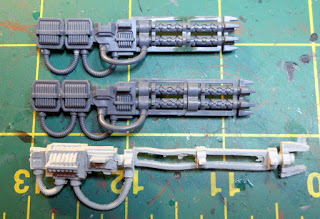 Here you can see my efforts, the middle one has slightly longer barrels as I cut them a little behind the power cable which looks awesome. Still not as long as the Heavy Gauss Cannon, but bigger, chunkier, twin barreled and most importantly - Straight!

Hope you like this. No need to purchase the wonky 'failcast' until GW makes them straight and in plastic. Cheers for stopping by.
Posted by Siph_Horridus