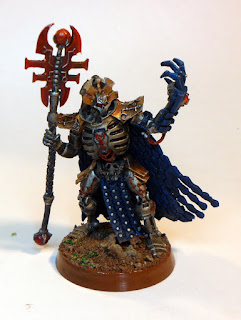 Not a new paintjob, you may have seen him here before, but in light of the Lord being re-based on a 32mm base, I had to re-visit the Stormlord! Here is Imotekh, now on a generous and more fitting 32mm base! Shame he was nerfed.... guess I won't be using him that often now - his Lightning Strike used to rock! Not any more... 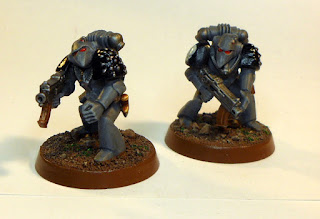 And another RTB01 Tactical marine joins his Brother, now two RTB01 done. Had an accident with the flamer marine, now will have to be re-armed with a modern weapon... I'm thinking a Spellcrow Gravity Gun (Grav Gun) to give an alternative (cheaper!!) twist to an old school classic... and RTB01 armed with a Grav Gun, awesome! The Sergeant has the classic Powerfist, but I've had to re-arm him with the FW Character Bolt Pistol which fits surprisingly well. I also had two too many fist arms like the left-hand marine, so one was re-handed with a fist holding a grenade, and another with an open cupped hand to better hold a Bolter. These are going to look fine!
Posted by Siph_Horridus