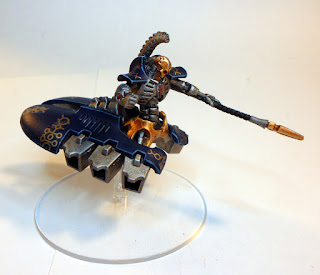 Hello Readers, here is my latest offering, to cap off the Destroyer Cult and go some way to making it game legal. Okay I have four more Destroyers and a few Heavy Destroyers to do yet, but hey, the force of Destroyers will gain the benefits from the formation (re-roll failed to wound rolls and failed armor penetrations rolls in the shooting phase), combined with re-rolls of 1's to hit because of Preferred Enemy Everything! The only restriction is three units of three Destroyers, one Lord and 0-1 Units of Heavy Destroyers. The Destroyer Lord was a finecast kit, not the worst but I am glad they've discontinued it. The staff was relatively straight but the end of the Staff of Light was misshapen so I combined it with the spare Warscythe arm to make a bladed weapon, so I can play either Warscythe or Staff of Light. 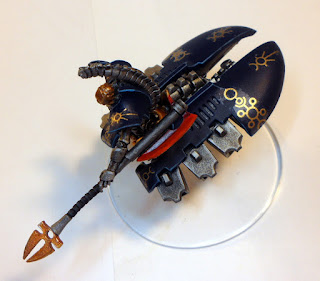 I used a plethora of transfers to denote his status above the other Destroyers, also a fair bit of gold and blue shoulder pauldrons too. And a golden head like the earlier Lord. 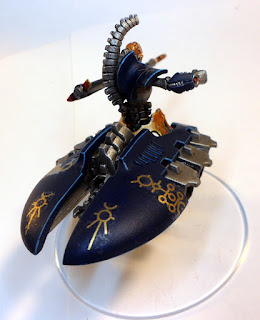 Most of the transfers went on okay, but one shows a little frosting from this angle, but generally they are flat and moulded onto the mini with micro-sol and 'Ardcoat. 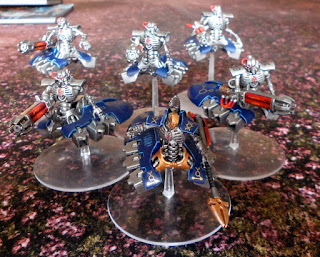 So here is the Cult so far. 2x2 Destroyers a single Destroyer and the Lord. A great addition to my growing Necron Army. Thanks for reading and stopping by, Cheers, Siph.
Posted by Siph_Horridus