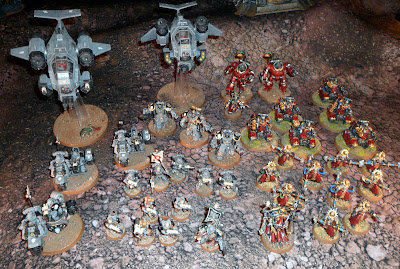 Hello Readers, time is nearly upon us at Weemen to visit up north and take part in the excellent friendly tournament of BlogWars 10 organised by From The Fang's Alex.

I submitted my army list to Alex a few weeks ago and wanted to use the recently purchased miniatures from Mordian7th into my Relictors, so without further ado, here it is:

I have tried to maximise the Forgefather gifts from fielding my named character Vulkan He'stan, and every SM Character has one Master Crafted Weapon. Along with Torsion Cannon/Arc Claw wielding Breachers and the ability to Deep Strike, this will be quite good at Anti-Tank, but lacks Anti Infantry. The Cult Mechanicus stuff will be fun to use as I haven't even play tested it!

Any way, wish me luck and see you there if you are attending!
Posted by Siph_Horridus