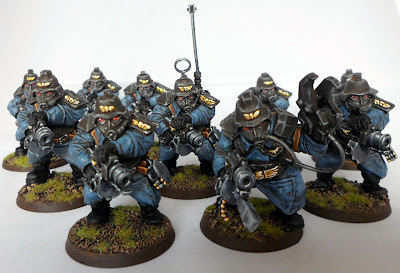 Hello Readers, something a little left field and different from my usual Relictors or Necrons. These are a lovely squad of Ogryns I picked up from fellow blogger Liam at Blue Warp Studios, he was having a clear out via eBay and I couldn't bear to see these models go for the paltry asking price, so I put in a decent bid and won! Liam is also the fellow who sold Lord Halfpenny his massive Warlord Titan model! 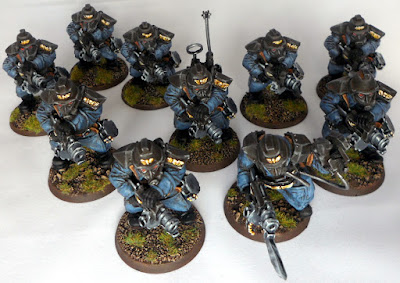 I love the fact that they have been converted from the metal Ogryn model and the addition of the face respirators and helmets and trench coats is ingenious, if GW/FW did these people would buy thousands I reckon! I still have no idea of what I am going to do with them, eventually I think i'll get three Taurox and have them for Apoc battles, for the sheer rule of cool - Ogryns are fairly expensive (Squad of three with Bonehead are about the same as a Termie Squad) and Taurox are not as good AV as Chimera but I love the look of these and will look forward to fielding the full ten in a big battle! I don't even have AM/IG rules yet! (EDIT 2020- I've sold these to my Astra Militarum/IG player mate Dark Canon, they will see a battlefield soon!) 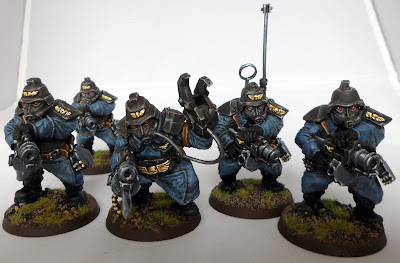 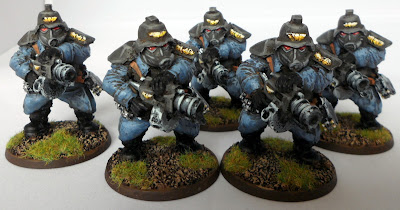 These are based on metal models and from these Liam cast the additional bits and added a Power Klaw and Vox set from a vehicle sprue, I have finished off the painting on the respirators and spare shells on the ripper guns magazines, but otherwise they are Liam's paintjob. I'll paint up the bases to match my others at some point but they are definitely good to go 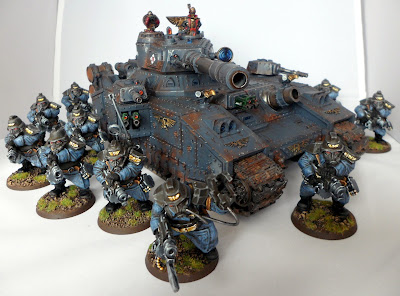 I thought about re-painting the trench coats a dark red to fit the scheme on my one squad of Imperial Guard/AM, but these match one of my two Baneblades, so with the addition of a Commissar or Commissar Lord or Priest for the Leadership boost, I will field as is. Thanks Liam, great stuff!
Posted by Siph_Horridus