Its been a few weeks since I have posted, but there has been a took of progress made in that time. First up we have the completed Armour Panels for the legs and erm...crotch...areas.

These were relatively big steps in the build and paint for me for the following reasons:
Question 1 was a biggie...do I paint it up to be an Iron Warrior titan? I am sure it would look good, but didn't fit the fluff, so instead I looked at the different Traitor Titan Legions and where possible read their history and tried to get an idea of the colours. I can't remember the exact ones I considered off the top of my head, but there are less than half a dozen Traitor Legions with a decent amount of info and pictures and ultimately I settled on the classic Legio Mortis. Mainly because the sheer amount of reference info. Legio Mortis comes in two flavours; pre-Heresy is red and black with gold trim and post-Heresy is basically full-blown Nurgle. Obviously I've gone with a pre-Heresy theme. I've even come up with my own history for the Titan(s) which I will try and put up one day. 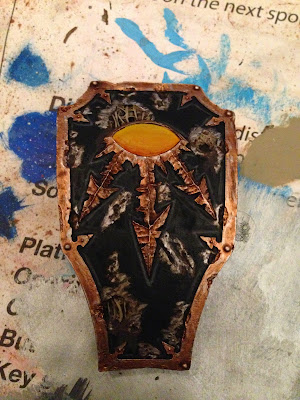 Onto question 2; the airbrush. I've never used an airbrush and luckily the Legio Mortis heraldry doesn't require much more than some stripes - so it should be doable. 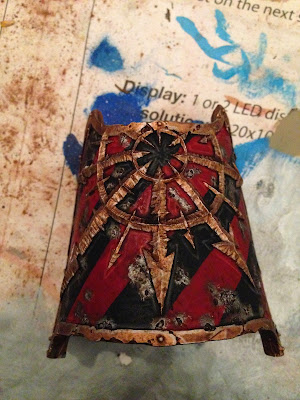 The second leg Armour Panel required stripes, so I treated it just like I would with my Iron Warriors hazard stripes - get the first colour down and then draw on the lines by hand (masking tape wasn't possible because of the amount of raised detail underneath). Then its a case of filling in the lines and cleaning up the edges where I've slipped.

Question 3 ties into Question 2 - you'll notice that all of my Iron Warriors are battle-scarred, so I went the same direction with the Titan (which will also tie into the fluff in my head). The actual model is already pretty damaged (on purpose) so this really helped. 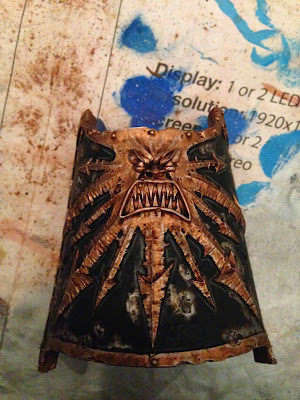 To add an extra touch, I added line highlights to accentuate the detail and break up any solid blacks.


Hope you like - next we are looking at the legs themselves.
Posted by the 6th degree