Hi guys, sorry about the late posting – been really busy since Blog Wars. Anyway, I’ll start by saying BW5 is probably been the best one yet, so a massive thanks to Alex for organising it again (you should start doing this professionally…or at least make some money off it)! 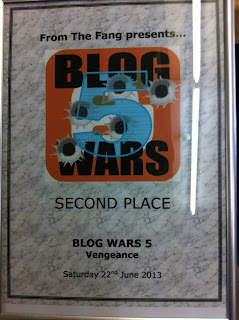 I say it was my favourite yet – this in large part came down to how I finished (more on that later), but also that I played against some great guys with some fun armies as opposed to uber-competitve or some of the new scary Tau or Eldar (which admittedly probably helped with my final placing).

You can see my list here. Unfortunately it wasn’t until near the end of the first game that I realised I had forgotten to take pics/notes…so the following summary is from what I can remember (apologies if I get anything wrong).

Game One was against Luke Frogg with an Imperial Guard army with Sisters of Battle allies. The list seemed to be Pask in a fancy Leman Russ, 2 Vendettas, 2 Manticores, lots of guardsmen, Celestine and 2 units of sisters in Rhino’s.  The game was Purge the Alien and Vanguard deployment.

I wasn’t completely confident against this list. Saying that, I wasn’t confident full-stop with this being my first game with the list. Previous smaller games had gone well until a T3 tabling by Greylamb… It seemed to have a lot of infantry AND tanks AND fliers; something I didn’t expect.

Luke hid his Manticores out of LOS behind a building and set up around it with the Leman Russ and Guard. The Sisters were on the edge of his deployment. I set up in as much cover as possible and crossed fingers.

Night fighting took effect and I stole T1 – managing to pop a Rhino and kill a few Sisters. Luke killed the Forgefiend in return and advanced Celestine to attack my lines. T2 and I dropped Abaddon and his Termis behind Celetine and surprisingly inta-gibbed her with a combi-melta shot… The Heldrake arrived and flamed a couple of Guardsman, but Luke had managed to deploy in a way that I couldn’t get a Vector Strike in. Luke replied by bringing in his Vendettas and killing the Heldrake. The rest of the game then deteriorated into a brutal shootout, with Abaddon and Termis getting killed by massed Lasgun fire (after Abaddon fluffing a charge with 12 attacks…), with both of us trying to cling onto units by the skin of our teeth.

Game Two was against Matt Calow with a mixed Space Marine force containing Khan (White Scars), a couple of bike squads, a Kheres Contemptor, 2 Vindicators, a Predator, the DA flyer, a Librarian and some tactical squads. The game was Scouring and Hammer and Anvil deployment.

Matt deployed first – pretty offensively, but left me two great sets of ruins to hide in. Given the amount of firepower in his list – I definitely wanted to be hidden T1. Nightfighting took effect and we had a look at the random objectives – I got all the high pointed ones, so Matt was coming to me!

T1 and it was the start of Matt’s bad dice for the day – he moved everything up and shot…but only managed to stun a Rhino. I replied by stunning a Vindicator and killing a few bikes. T2 and Matt brought in Khan and his flyer. The flyer managed to take a wound off an Obliterator and Khan got into position to kill the CSMs holding a juicy 4pt objective. I brought in my Heldrake and dropped Abaddon in his backfield to trouble the tactical squads holed up there. A combination of the Heldrake and Havocs killed his flyer, the Forgefiend wasted the Contemptor, the Obliterators popped a Vindicator and Abaddon and chums shot apart a tactical squad. All good!

In T3 the Forgefiend was killed and the remaining Vindicator cleared out a couple of CSMs for Khan to charge…who was then overwatched by a Lascannon which killed him instantly…  Having only lost about 8 models so far, the rest of the game was spent with my taking out the remainder of Matts army – which was tabled in Turn 5 and allowed me to grab all the objectives for a massive 16-0 win.

After that win I was bounced to table 2 to take on Jamie (from Index Astartes) with a great mixed SM army. I have been following Jamie’s blog for a while and really thought he was going to win the painting competition – every unit of his was a beautiful example of a different component from various SM armies and his NMM Lysander was stunning (and got my painting vote). We both found it weird that we are more painters than players, yet ended up on table 2… 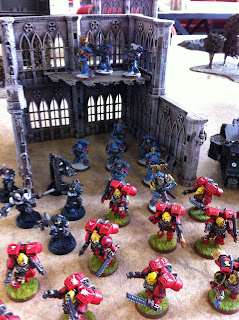 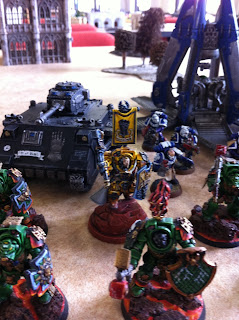 I got to choose deployment so went for the side with two large ruins looking opposite a single ruin in my opponents deployment. We both deployed in cover with the Heldrake, Abaddon & Termis, Stormtalon, Sternguard & pod, Assault marines and Termis all going into reserves.

I took first turn and took some pot shots at the ruins opposite me – but Lysander and his warlord trait gave the ruins a 2+ save – only a few marines died. In Jamie’s turn, he daringly landed his drop pod directly behind the ruins with my objective and Lysander and the Sternguard ran out and opened fire on the CSMs guarding it.

In T2 I brought in my Heldrake which wiped out the Bike squad. Abaddon and Termis walked on from my edge to deal with Lysander and the Sterngaurd. Their shooting took Lysander down to 2 wounds and the rest of my nearby forces wiped out all but two of the Sternguard. In Jamie’s turn, the Stormtalon came on and immediately targeted the Heldrake – but failed to cause any damage. The Scouts and Assault marines entered and pushed towards my objective. Lysander fluffed his charge through cover into my CSMs leaving him exposed for next turn.

In T3 the Heldrake downed the Stormtalon and started flaming the squads protecting his objective. Shooting from the rest of the army thinned down the Assault marines to 4 strong. Abaddon charged Lysander and killed him before he could strike back. Jamie then managed to deep strike his Terminator squad next to my ruins where they would try to clear out the objectives next turn. The Assault marines and Scouts moved to the edge of my ruins.

T4 and the Forgefiend made a mess of the Terminator squad – showing what 3 S8 AP2 blasts can do to a tightly packed Terminator squad. Abaddon charged in to finish them off. By now Jamie’s army was blunted with only his Scouts and half an Assault squad left out of his deployment. The rest of the game involved Abaddon, Termis and CSMs keeping them at bay (and eventually killing them all) whilst the Heldrake and the rest of my army cleared out his ruins.

It was close but the last roll of T7 was Jamie trying to save his last marine holding his objective. A pintle-mounted combi bolter fired…hit…wounded and Jamie needed to make his 2+ save to draw the game. It was a 1…tabling him and winning me the game 3-0.

That was the last game and in the end, left me in 2nd place…something I really hadn’t expected at the beginning of the day.

In the Character painting contest, it was apparently a three-way draw between myself, Jamie (and his awesome Lysander) and Nathaniel Gibbs with a nicely painted Coteaz, who managed to just swing the win. I am more than happy to share 2nd with Jamie on that.

In the Army painting contest, I placed 2nd as well! This time behind Henrick who had a very nice Dark Angels army that you can see more of on From the Fang. 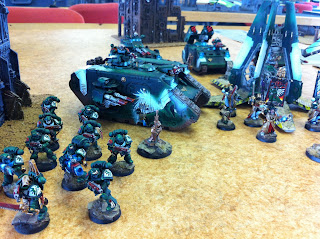 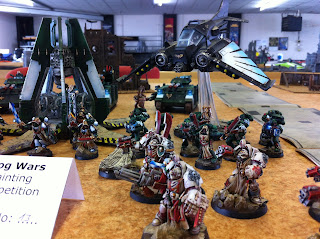 So overall – an awesome day playing some awesome people, with three very unexpected 2nd places for Weemen!
Posted by the 6th degree