Hi guys, I managed to grab 5 mins last night to take some pics, so I can now post up my newly(ish) finished Heldrake. 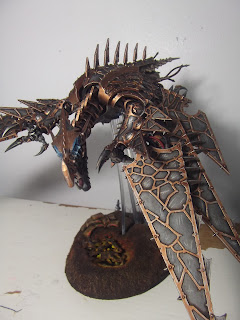 Boy this model is a doozy! I didn’t appreciate how big (and spiky) it was until I started building it. This one is just a standard build with no conversions – I will be getting another, so this was really an exercise in how it fits together and what is in scope to be changed next time; I’m thinking a new head and change up the position of the wings and legs… 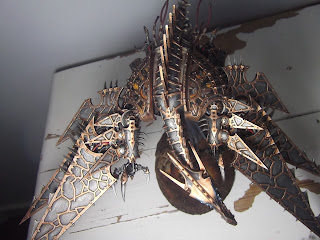 The model is also a beast to paint – the second I glued it all together I regretted not painting it whilst unassembled, although in the end it wasn’t as bad as I first feared (definitely doable because the bits you can’t reach also can’t be seen in detail). I’ll definitely give respect to anyone who has done a good job of painting more than one of these those – curse those wings!!! It took me around an evening’s painting to get down the gold vein basecoat on one side of a wing – so four nights of painting gold veins. Then another night of clean-up. Then another four nights of highlighting the gold. And that was just the wings! Because I only have time right now to grab an hours painting every other night or two – this model actually took me about 6 weeks to complete. 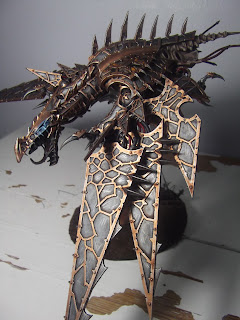 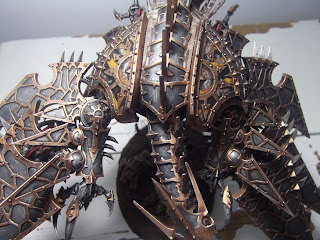 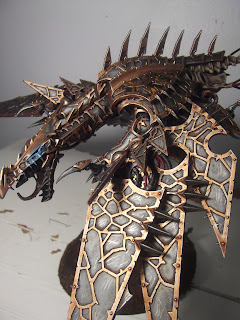 I have tried to use blue glowing effects on the eyes and belly to match the Forgefiend and plasma weapons in the rest of my army and I think it’s starting to get neater. 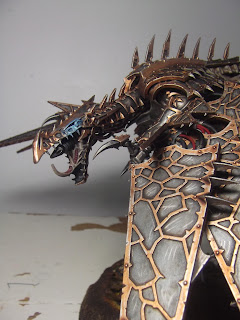 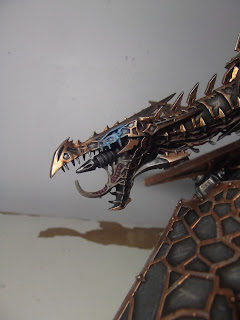 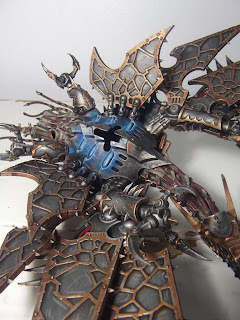 The base was pretty fun – seeing as it only needs to hold a flight-stand, there is loads you can do with it. For a start, the base is made from about an inch of polystyrene, carved to shape, sealed with PVA and sand and a cross cut into it for the flight-stand. I’ll definitely be doing that on similar bases because it means you can slot the flight-stand into the base and model and it holds without glue – so great for transporting. 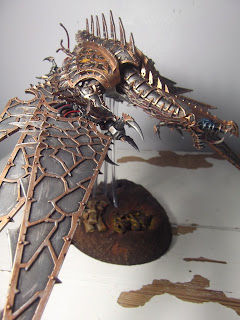 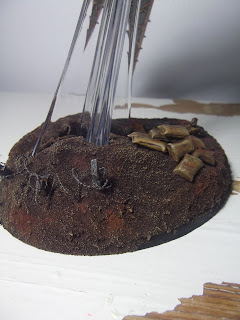 I decided early on that I wanted a pit filled with smouldering bodies; as if a pile of (imperial) corpses had been burned (might be a little morbid looking back now…). I used zombie models from the Zombies!!! board game (you can buy a bag of 100 for £10). The models aren’t great and are all the same pose, but I cut some up, repositioned a few and finally held them over a lighter so they twisted, contorted and the surface bubbled a little. 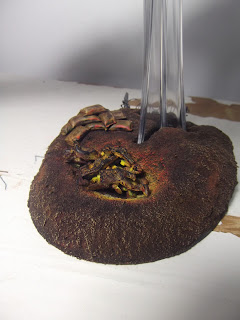 Anyhow, I am pretty happy with how it turned out – comments and suggestions on how to improve the next one are appreciated as always.

P.S. Just thought I would mention that these guys live up to their rep on the table – you HAVE to prioritise and kill them the turn they arrive or they will make a mess of your army…doubly so if you are running power armour (in BW5 my Heldrake got taken down immediately in game 1 but in games 2 & 3 went on to massacre about a third of each opponents army).
Posted by the 6th degree