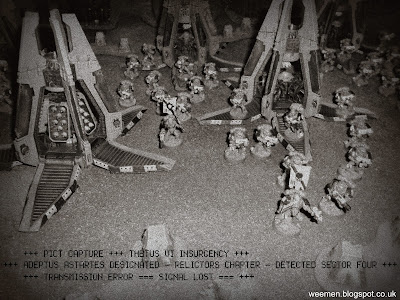 Hello avid readers, thanks for stopping by. So, I finally finished all of my remaining Drop Pod doors and now have 5 Drop Pods finished, 1 from ages ago, and 4 new... all painted to match the earlier pod - which made me paint the interiors to a high standard to match the first! No scrimping and saving time for me.

+++EDIT+++ I've edited this post's picts to put this one first, as it captures the Pods best! Nothing better than a shot of the Pods disgorging their cargo on some alien or heretic planet!!  I got all the Pods and four of the Tactical Squads out for a show... so until the next post you'll have to make do with this grainy pict capture, I've taken more in colour and less like a grainy pict capture for eye candy next time. 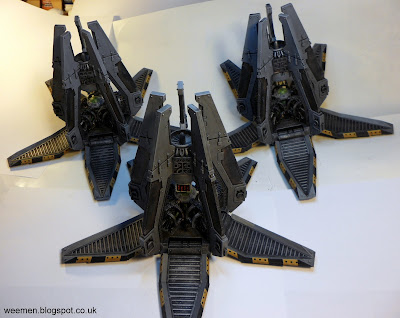 Here is a shot of the 3 new troop Pods in all their door-chevron glory - I thought painting 20 doors was tough, but 120 chevron stripes was evil! All marked out with pencil stencil first so they are the same orientation and size. The chevrons on the door were a lot easier than they looked, firstly I used a 1cm card stock to measure lines and marked with pencil along the door length, I then painted the yellow in between the lines with Citadel Foundation Tausept Ochre, then 2 washes of Devlan Mud on the lower halves and then a final line highlight of Foundation Iyanden Darksun on the upper edge. 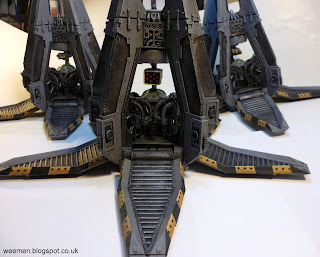 One of the new Pods has a missile launcher for some variety, albeit, only a minor difference! I think I'm done painting drop pods now... for ever! Ha Ha. 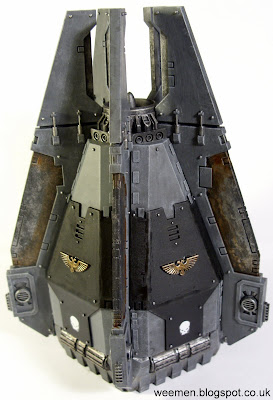 I forgot to take a shot of the outsides, so this is the original pod. Trust me, they are all identical.
Posted by Siph_Horridus