You would think this lowly little Rhino is a Forgeworld super-heavy by how much I’ve been fawning over it for the past week – but it’s the first tank that I’ve built/painted and apparently that’s enough to get me excited... 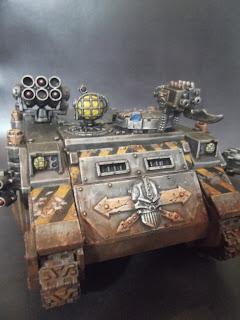 It is going to probably be one of a pair that will provide some long range fire support (via Havok launchers) in the early turns and then take their respective squads to their objective-based destinations mid-game. 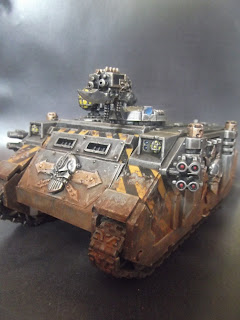 The build was a fairly easy choice; take the Havok launchers as yet another form of shooty and leave off anything spikey (spikes really don’t fit my armies look all that well). I picked up the Iron Warrior doors from Forgeworld – the motto whilst building this army seems to be “if you are going to do it, you might as well do it properly/expensively”. 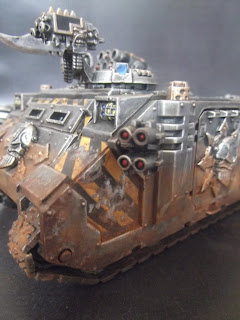 I was a little concerned whilst painting it; people often talk about the difficulty they have painting flat expanses without the use of an airbrush and this was going to be twice as bad painting it almost solely with metallics. Luckily I managed to keep all my brushstrokes going in the same direction and it turned out looking a little like brushed steel. Not sure what will happen with Land Raiders though. The hazard chevrons were also a pain to paint – apparently I can paint in a straight line on shoulder pads, but not on a flat surface... 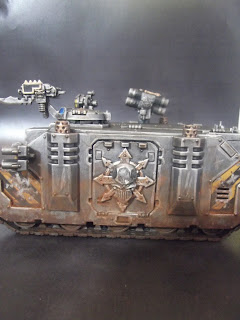 The lights were a nice chance to try out painting jewelled/reflective effects which turned out pretty well for an early attempt. 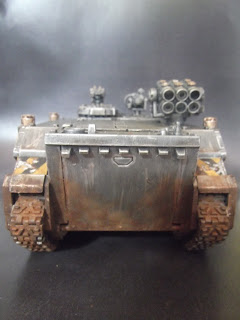 It was also a chance to try something new with the weathering powders; normally I have been applying them in their powdered form, but for this model I added some matt medium to the pigment to make it think and almost like a paint, which I then stippled on and finished it off with a dusting of the powder, to make it nice and dirty. 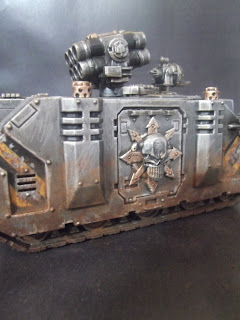 I have managed to include it in one game so far and it really was the little engine that could, after wiping out half a DE squad and taking two penetrating Dark Lance shots without exploding. 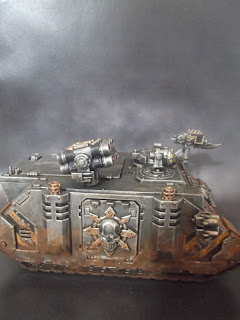