Last Night on Earth – Board Game

In a change from tabletop wargaming, I thought I would throw up some pics and a mini-review of a board game we have been playing ‘ere up North. 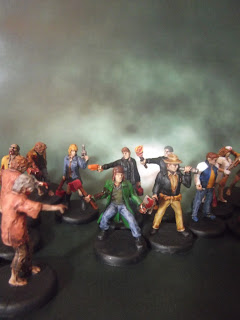 Last Night on Earth is a zombie survival game with players taking control of either survivors or zombies (duh...). The game has a number of missions with tasks that the survivors must complete within a set number of turns in order to win, whilst the zombies generally just need to eat the survivors brains. 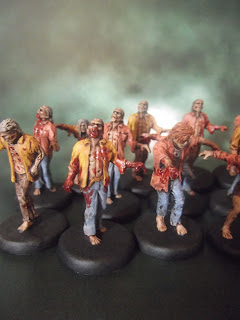 I first saw the game being played on W(h)il Wheatons Tabletop series (speaking of which, it is International Tabletop day on 30th March 2013 – so check it out!) and liked schlocky style and cliched characters and soundtrack (which comes on a CD included).

The mechanics are simple – survivors move around and search buildings for weapons and mission-specific items, can shoot guns (if they have any) and fight zombies. 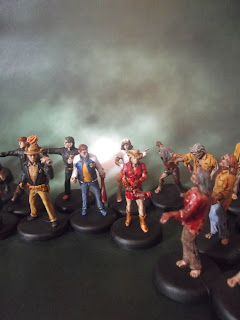 The game is easy to pick up and we’ve had several (drunken) games with (drunken) partners and everyone has had fun. We also learnt that the tiles are spill resistant at this point.

Down to the fun part – the minis! The game comes with 8 unique survivor models and 14 zombies in 3 different variations. Whilst the models are nowhere near GW standards, they are still pretty nicely sculpted and have plenty of character and were dying to be painted. 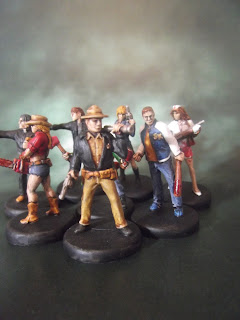 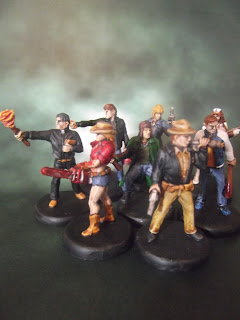 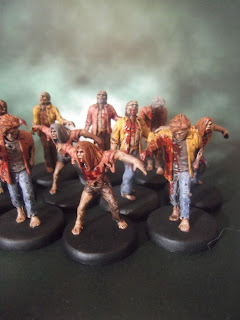 The models were easy to paint – even though I only did them to a basic standard (base colours, washes, quick highlights, bit of blood etc). I didn’t want to put too much effort into them seeing as they will be handled a lot, they were only basic sculpts and there is no case for them (they just sit loose in the box – although I did give them a coat of Purity Seal to keep them looking good for as long as possible). 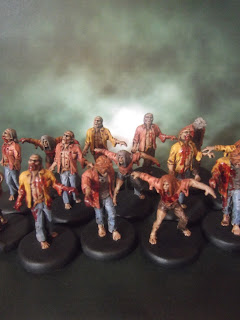 The game was about £40, which I don't think is too bad for a board game of this quality with a fair few minis and I’ll definitely be investing in the expansion packs in the future.
Posted by the 6th degree