Just a quick post to demonstrate one of our projects - another Daemon Prince to add to the vast Daemon collection - this one has had several additions and minor conversions to make him stand out.

Firstly I wanted to try something a paint scheme that was a little different, and one that would be interesting to paint - I love Siph's Relictor scheme and thought 'why not' after all, Relictors are known to dabble with chaos weapons - what would happen if one such Relictor Captain went a bit too far and became one with the warp... thus the Daemon Prince was born.. 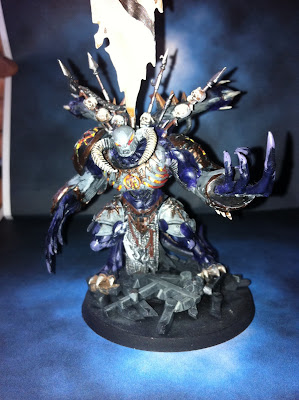 I wanted to make the plastic kit more marine like, so I converted the head- I chopped back the original neck portion, and added a spare Contemptor head to the model a perfect fit! Both in size, and the look- I decided to model horns to the helmet from one of the daemon heads to 'chaos it up a bit' The overall look of the model with the converted head is less hunched over- more 'humanoid'. 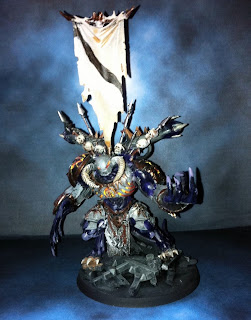 The next additions was the skull rack and banner pole - the racks were taken from the Daemon Prince kit, and modelled to fit on the upper shoulder/back portion. It was after I finished the model that I realised it needed something extra- I dived into my bitz box and found a spare Bloodletter banner - I bored a hole into the back of daemon, to allow the pole of the banner to fit tightly. The overall affect of the banner is to make the model look bigger and to stand out - I also added spare 'sprue' pieces to the base to look like detritus of war and to make him slightly taller.

The armour was painted to reflect that of Siph's Relictors and was surprisingly easy to get a nice affect. I opted to paint the 'workings' of the armour a fiery red/yellow/orange- as if chaos is now burning in is soul - I carried the same scheme into the shoulder pads and the eyes. The banner was painted similar to those of Siph's, again trying to achieve a true likeness of Siph's models. 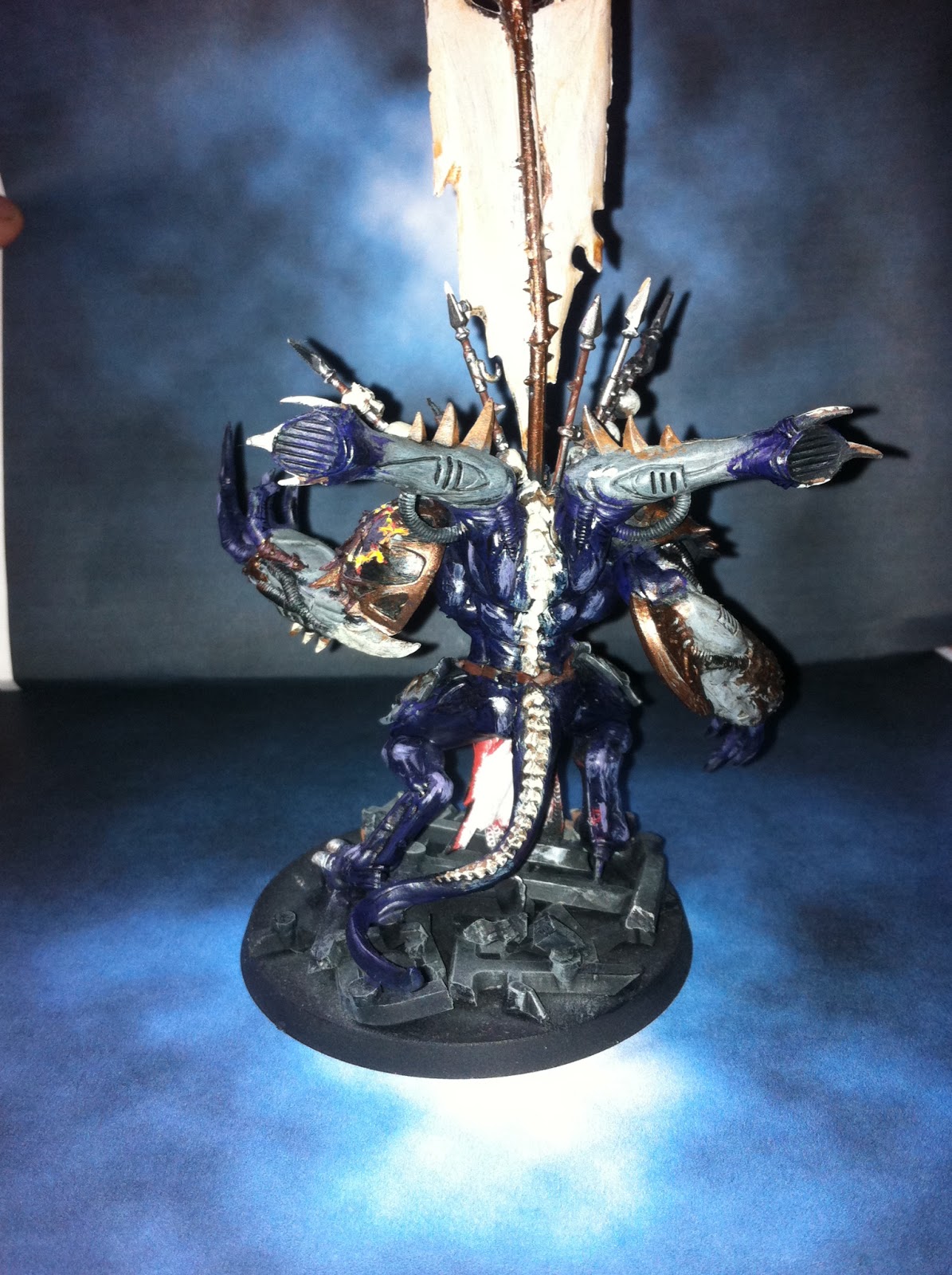 For the models skin I decided to go for a deep rich purple to contrast against the grey armour, as well as to be different to the the skin tones of my other chaos models.

To finish the model I want to add transfers to the banner and shoulder pads, and then overlay these transfers with the 8 pointed star of chaos. I also need to finish the base as well as maybe adding a few skulls and SM helmets as 'trophies..'. 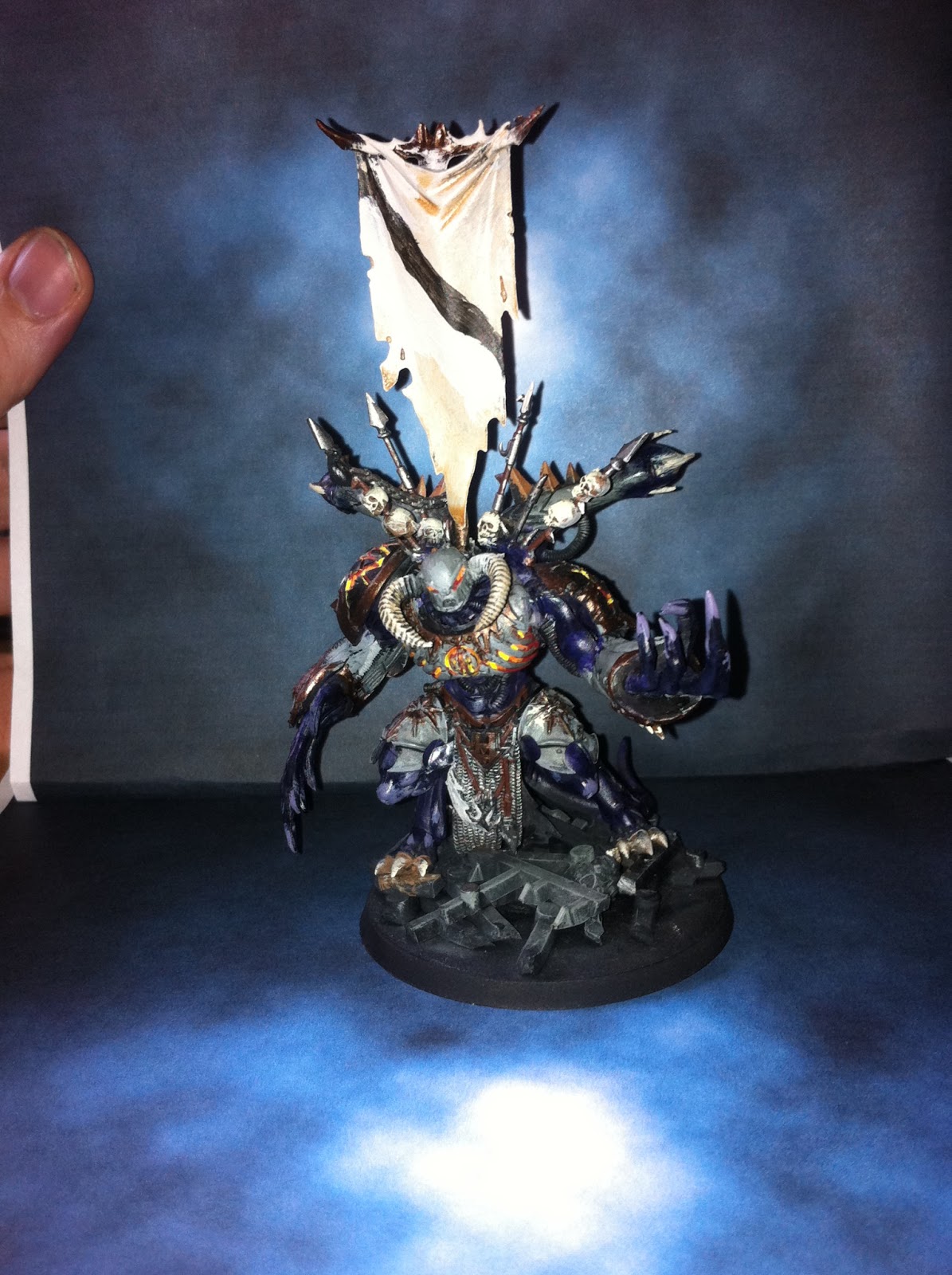 I hope you like the results!
Posted by Lord TITANium Halfpenny