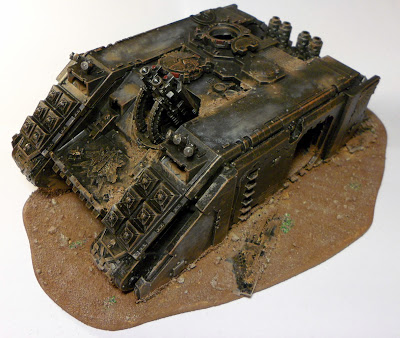 Continuing my progress in the fight against grey plastic scenery for our Weemen to fight over, I've just completed a rather expensive piece of scenery - A Forgeworld Space Wolves Spaced Armour Landraider! 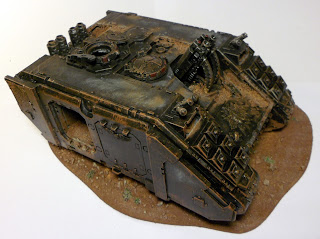 Fear not, this was purchased on the cheap with a load of space wolves which I eventually sold, making a nice profit on the Wulfen I might add, and this part of the lot was missing the weapons and  headlights and top hatch so I added a spare hatch and then hatched a plan... 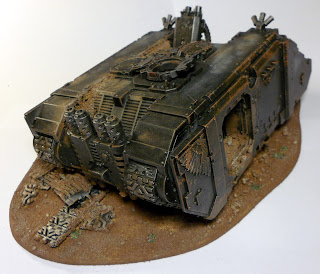 I got my Jigsaw saw out and hacked off a slice of the landraider from one side, used the hacked pieces as wreckage / thrown tracks and painted it up as a wreck. The model was basecoated black then given a liberal drybrush of Macharius Orange to simulate rust before a drybrush of Boltgun Metal/Leadbleacher before targeting bits like tracks or viewports or SW markings with some spot colour, a hint of Astronomican Grey on some larger panels to hint at it's long lost Chapter heritage and then based as my normal reciepe of Calthan Brown with a Kommando Khaki and Bleached Bone drybrush. 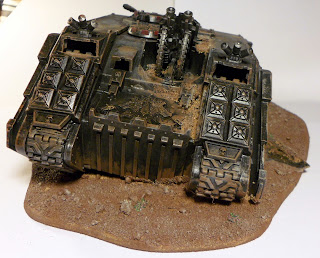 The front view shows the angle the Jigsaw hacking acheived, giving the illusion of being half buried and forgotten with some dirt resting in the crevases etc... hope you like my quick and easy method of doing a rusting hulk themed piece of scenery to fight over.

If you like this, check out my Tank Traps or Bastion or Objectives or click on the Terrain link below to bring up all the Terrain featured posts...
Posted by Siph_Horridus