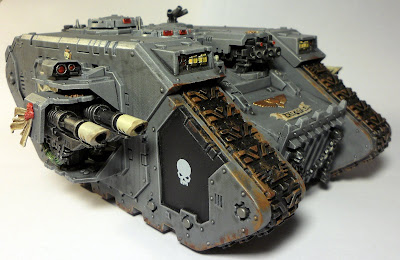 Hello Readers, this is the latest addition to the Relictor's growing Battle Company, the Godhammer Pattern, Landraider "Zhiggae". 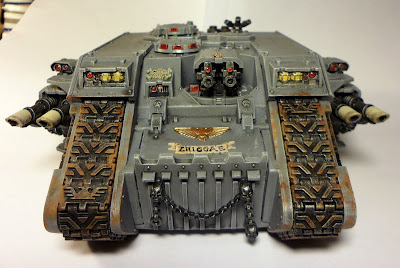 I opted out of fitting the Multi-Melta, I know its only a cheap add-on but survivable anti-tank weapon, however with the PoftMS, I intend aiming one Twin-Linked Lascannon at one target, and the other using the PoftMS at another, so leave the other short range Landraiders, Redeemer and Crusader with the shorter range Anti-Tank Multi-Melta's instead. 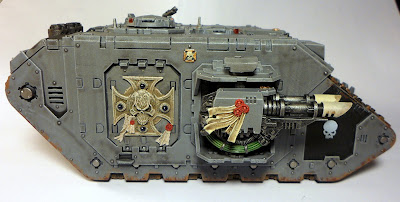 The side doors are from FW, I opted to leave the front hatch as the standard kit and will 'bling' the eventual Crusader variant with a nice front hatch. And I have some Extra Armour for bulking out the eventual Terminus, once I can decide where I want to mount the extra single sponson Lascannons... triple side sponson, on top like Pornstarjedis, or FW Razorback turret type on top or Pred sponsons higher up and rear of side sponsons? Any suggestions? But not as the GW stock standard, blocking fire arcs of main armament! Stoopid. Maybe a poll is needed>>>>>> 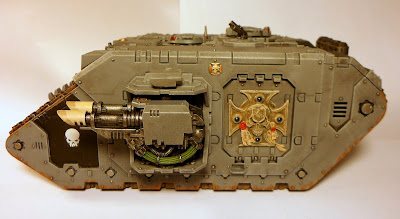 I've weathered the tracks and surrounds with a bit of stippled mud to match all my other vehicles and as before, the LR has a crossed skull icon on the front (by PoftMS sensor) and some Chaos chains, visually linking her with the rest of my Armoury. 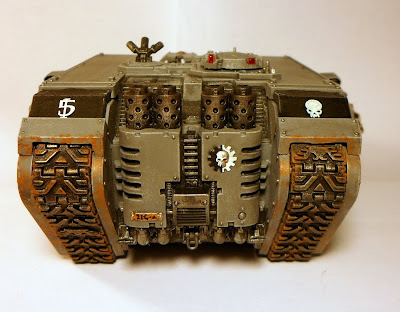 Now this is behind me, what's next... hmmm, maybe another Dreadnought in prep for the 3-way at the end of the month, and to finish of the chassis for the 2nd Whirlwind. And eventually I'll finish of the last squad of Devastators and HQ for my entire Battle Company - just missing these and 3 transports to have a Codex complete Battle Company (plus a considerable lot of extras!)

Thanks for stopping by. Siph out.