This month I have set myself the task of building and painting a TyrannoFex.

The TyrannoFex is essentially a super Carnifex, with 6 wounds and a loadout of bio-weaponry that includes a S10 Assault 2 cannon with a 48inch range. Being a bit of a hulk; it’s great for stomping forward, popping mech on the way and generally causing mayhem up close.

It’s also another popular unit that GW doesn’t have a model for – so I set about making one. Annoyingly, the only official artwork for the unit I could find is below. 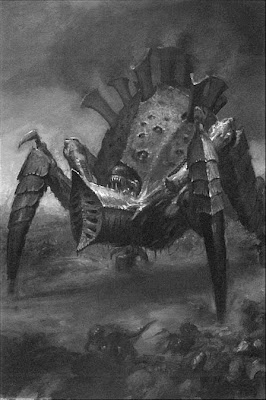 Before I started the conversion, I had already decided to use a Carnifex as a base (what else is there really???) and tried to capture what I though were the key aspects of the TyrannoFex:

Scouring my bitz-box for parts, I think I ended up being able to capture essence of the creature using the Carnifex kit and parts from Hive Tyrant and Trygon kits.

I was able to make the model larger than a standard Carnifex and give it a hunched pose by extending the waist using a 2cm tube of plasticine (I didn’t have enough GS to use for this – and I have previously used plasticine to bulk out sections and it worked fine). 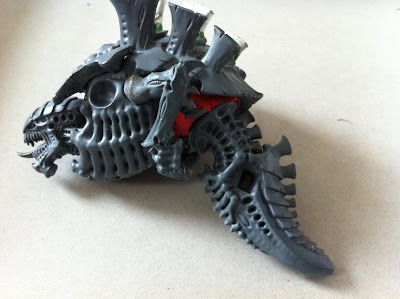 The Rupture Cannon was made up of the MC Adrenaline Gland (with legs snipped off), the side barrels from a Barbed Strangler and carapace parts from the Trygon. The tubes connecting to the arms are also from the Barbed Strangler. The gaps were then filled with GS (my GS skills aren’t great – so hopefully the paintjob will cover any crap sculpting).

The middle vents on the back were taken from a spare Hive Tyrant torso I had lying around and pinned/GS’d into place. 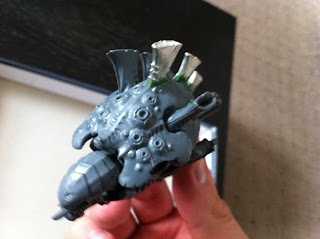 The rear legs are standard Carnifex legs with one cut and remodelled to be stepping on a rock and the Rupture Cannon arms are MC Scything Talons (with the talons removed) and placed upside down. 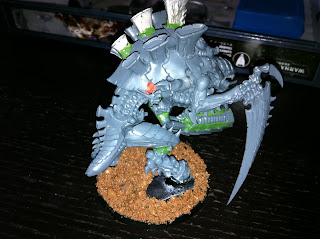 Overall, it’s not the best TyrannoFex I’ve ever seen and it would be nice to have been a bit larger, but I think its one of the better conversion pieces I have done. 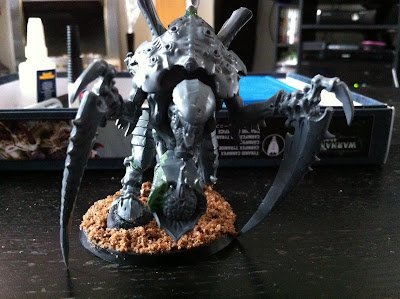 All that’s left now is finishing the basing (just needs a few more rocks) and it will be ready for a lick of paint.