Continuing the recent Assault theme, this is how the Assault Detachment of my Relictors Battle Company now stands, two full squads and an Assault Chaplain as an HQ choice. As you can see the latter VIII Squad is moodier and darker and uses Chaos Helmets and a splattering of SW Chainswords, Chaos Plasma Pistol and some tattered loin cloth pouches. The former VII Squad is considerably brighter with Bone coloured jets and red chainswords, but I like the differences, portrayed in the Sergeants too. 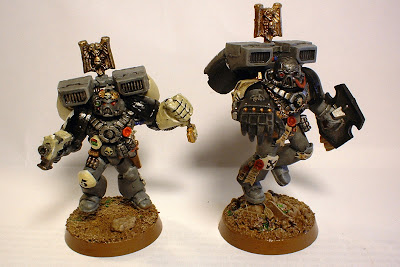 These two need an HQ to lead them into battle, so there is no better cost effective battle leader chioce in the SM Codex than an Assault Chaplain (IMHO), Liturgies of Battle for re-rolls to hit on the Charge and making the squad Fearless coupled with Digital Weapons himself for re-rolls to Wound with his Power Weapon Crozius - lots of hurty death to deal out. 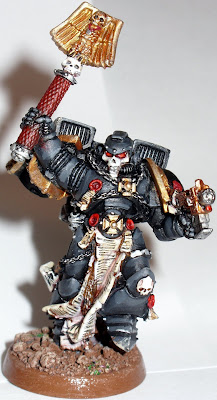 Will be back soon with some more heavy firepower...