Hi all – no posts from me in a while...not because I haven’t been making progress with the Weemen, but more that I am rubbish at getting round to take pics.


Following my xmas exploits in Warhammer World, I made the decision to start a Warhammer army and picked up a Warriors of Chaos battalion boxed set.

I have chosen to dabble in WFB as the majority of my local GW obsessed friends play WFB more than 40K, so I thought I would join in the fun. In fact – they are so WFB oriented that I had trouble picking an army that wasn’t already being played. I think I had the choice of Skaven, Ogres, Beastmen, Brettonia and WoC…and still having 100+ gaunts to paint, I decided to go for an army that wasn’t high-volume. 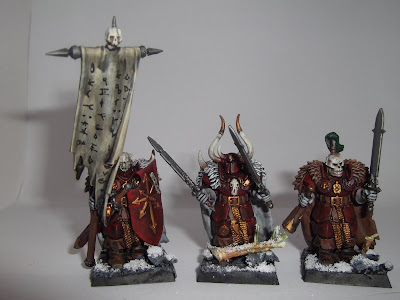 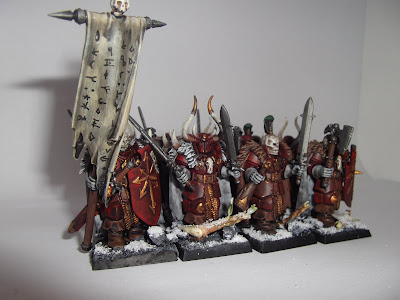 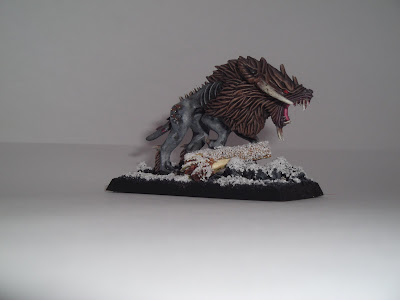 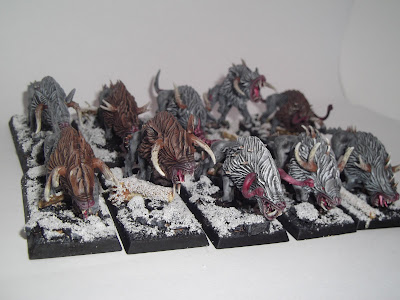 As you can see – I have decided to go for the “Khorne-blood red” theme for the warriors that will continue throughout the army. Although the army looks like they are dedicated to Khorne – they aren’t. I will typically be playing an undivided army and will only have one or two units that are dedicated to a specific god. I chose the colour scheme because I like it and it complements the tribe’s name – "The Children of the Crimson Tide" (I thought it sounded a bit Conan-ish).

I had a couple of small games with the battalion to learn the WFB rules – which went well and led me to go on a bit of a spending spree. In the space of a week the army bulked up to:

All that comes to about 2600pts when you start tooling everyone up and provides a solid core that I can add too bit-by-bit.

I also had my first full sized game recently, facing off against a gun-heavy Empire army and was pleased to win approx 2300 – 670; by the end, most of my units we pretty decimated, but still holding strong (including a unit of 3 Warriors who suicidally charged a unit of 40 swordsmen), whereas the Empire army was all but tabled (a lone Hellblaster Volley Gun lay just too far away to charge in the final turn).

What’s next? I am thinking about bulking up both Marauder units (to about 40 each) and adding another unit of Warriors…and probably a Hellcannon.