Another weekend, another 40k battle - this time Siph and I decided to go 'old school' with a good old fashioned floor battle - as we had a full weekend potentially available we went for a mammoth 9000 points a side, including titans and superheavies - as we arranged our respective armies together, it was apparent that this battle was going to be colossal, with potentially average 40k armies getting killed in a single turn. (Turn 1 and 2 being the Relictors!!- Siph)

The scenario for the titanic battle pitted the mighty Ultramarines against the Relictors. Each force included Reavers and, for the Relictors a Warhound from Legio Astorum. The Relictors had also included two Baneblades and an Emperors Fist of 10 Leman Russ Battletanks and a lowly squad of 10 Guard (all I'd painted! - Siph) to fight on their side. For the Ultramarines, a Shadowsword and Banesword fought on their side, along with a Vindicare and Eversor assassins.

### (Transmission) ### Marneus Calgar - this is Sgt Abacus, we have located the site were the forces of chaos once fought. The city of Andarc, once a proud Imperial City - now a wasteland of deserted buildings and wrecked tanks. We believe that we have located relics within the city, 5 in total. We have sent scouts ahead to monitor the location, however reports indicate that they spotted a large force heading this way - request further intervention - Lord Calgar - we have spotted titans - aaarrrgghhhhh...(static)(Transmission Ends) ###
## 'Sergeant Abacus, Lord Calger- confirmation- titans?' 'Sergeant Abacus confirm!' ###
### 'Master Librarian Ephesus - Ultramarines have been spotted within the city- how would you like to proceed? '
'Titan Honorum - engage the hostiles'
'Sir? - these are Ultramarines'
'They are here to prevent us taking the relics! We need those relics for the Emperor - engage!' ###

As per a normal Apocalypse battle we selected our strategic assets, and the time to deploy. Having played a couple of apocalypse battles before, I knew how important going first was. I decided to opt for a deployment time of 90 seconds- Siph 22 minutes - Thus the mad dash to deploy all my initial troops started- with Siph laughing as I hopped over buildings trying not to cause too much damage. I was quite happy with the facts, that I had 3 trusty strategic assets- careful planning - allowing half the reserves to arrive on turn 1, flank march - allowing my reserves to enter from any table edge and legion relic - a nasty S10 power weapon, that doubles the users attacks, I gave this to my Jump packed Captain - 8 attacks on the charge- nasty!

Siph went for the precision strike - allowing all models firing at a single unit (Emperor's Fist against Terminus) to hit on a 2+ for a whole turn, Orbital Bombardment- apocalypse barrage (4) S8, AP3 of pain (which I forgot to use! - Siph. Doh!), and Strategic Redeployment - allowing any of my forces outside 12" of enemy to move anywhere across the table on Turn 1.
Deployment 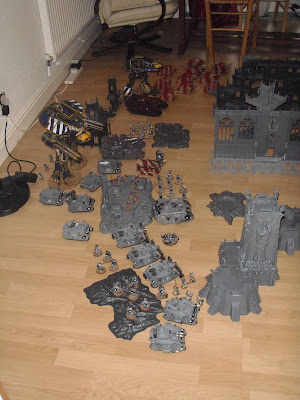 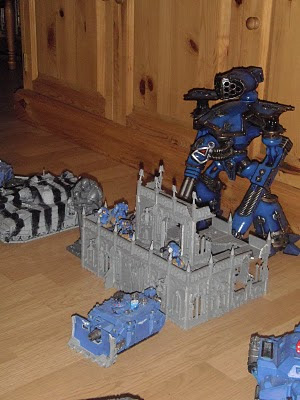 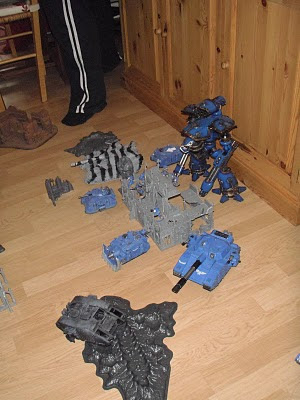 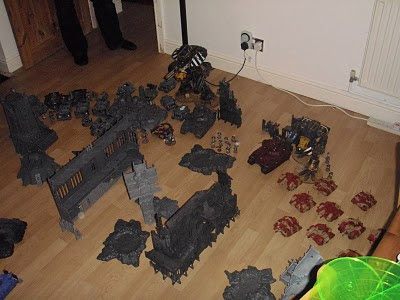 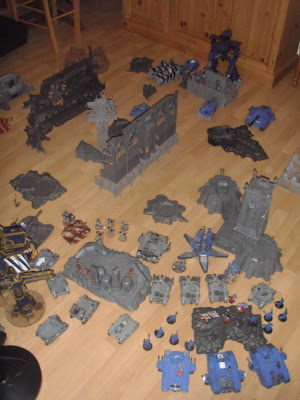 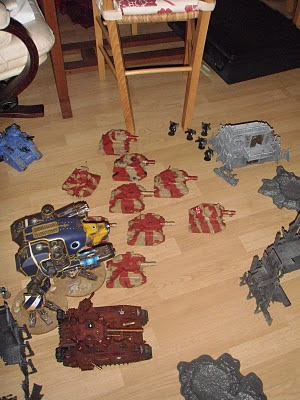 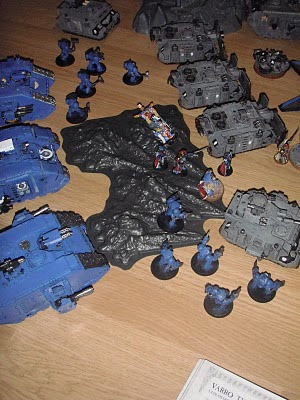 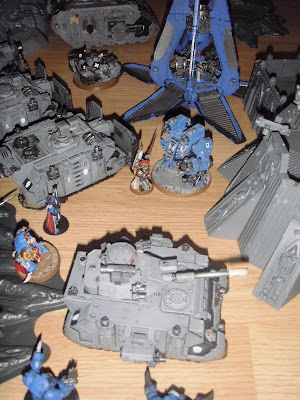 Key moments- Relictor Vindicators turn to combined fire against the Land Raiders- however the blast (even though it was 10inches missed!) Ultramarine Ironclad disposed of the Chief Librarian, and took a wound of the Relictors Chapter Master. 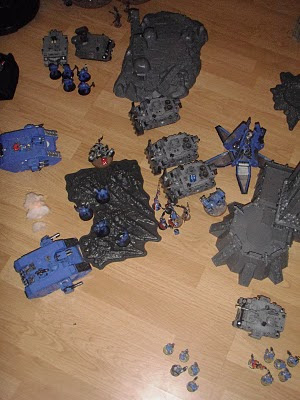 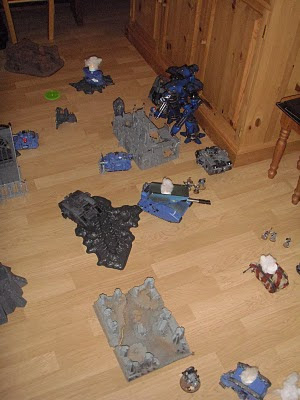 Key Points- Marneus Calgar finishes off the Relictors chapter master, The Leman Russ's take damage from the Land Raider Terminus, however the Russ's take out the marines holding the objective in front of them, the Ultramarine Scouts are blasted apart by the banblades in the centre- again leaving an objective clear. The Ultramarine captain with the legion relic charges into the Reaver, taking 2 structure points- in return the Reaver flattens the Captain with a mighty stomp. Ultramarines down 1 objective. 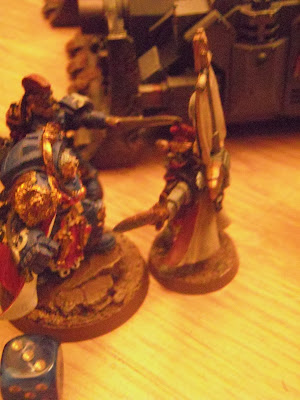 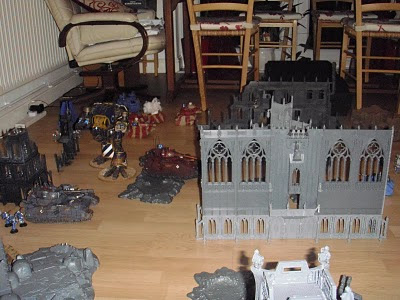 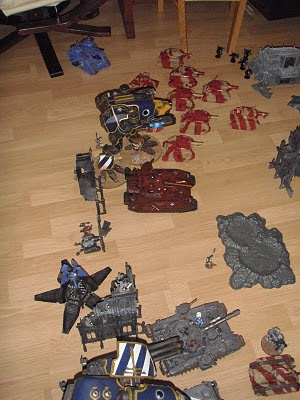 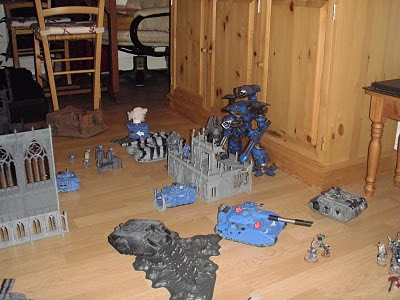 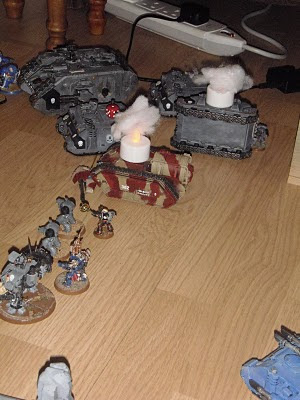 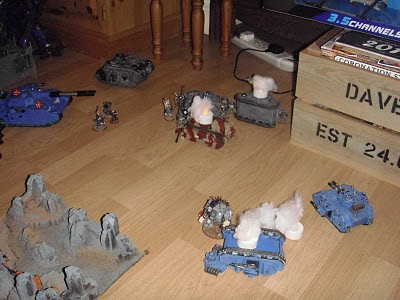 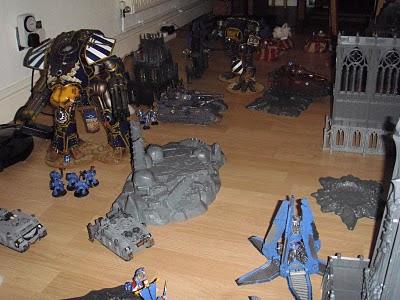 Key Points- The Leman russ's charge into take the objective in the ruin- they open fire on the shadowsword by the Ultramarine held objective, causing a hit, which took a structure point, the result of which caused an apocalyptic explosion! (Siph rolled 3 6's in a roll!) the resultant blast killed the Ultramarines holding the objective! Marneus Calgar took all the firepower of the Reaver, falling after several destroyer blasts from the turbo laser destroyer! (simply overkill.... Jedi) 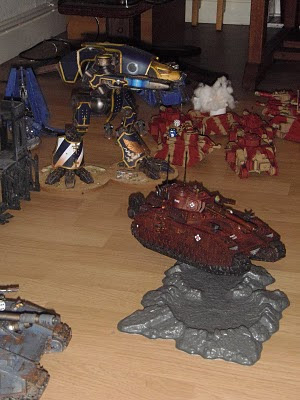 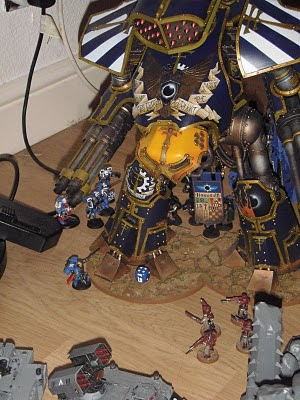 The end of the battle saw Siph holding 2 objectives, Jedi with 0 (due to the -1 legion relic)

Overall a really great battle, with several interesting situations. (I will be working to produce some Apoc House Rules as a post over the next few weeks.) it definitely helped having plenty of space for the battle, and having floor space for dice rolling/discussions/beer drinking. There were a few moments of heated discussions- such as drop podding next to a titan (within void shields) and whether a hit from a destroyer weapon should negate some invulnerable saves (storm shields) These are definitely special battles, which can provide those magic moments- the 3 6's Siph rolled was just incredible- then the apoc blast of 11inches taking my squad out holding the objective.