Another weekend, another confrontation between the two mighty armies of the Ultramarines, and Relictors. The battle took place over the shattered remains of a once proud imperial city, three key objectives littered the city, with both armies looking to capture them from the opposition.

We decided to go initially for a 1500 point battle, however we opted to increase that slightly to 1600. For this battle we went for a similar approach, infantry heavy, tank light due to the built up manner of the battleboard. The Relictors force comprised of 2 Scout squads, 1 armed with sniper rifles, two Tactical squads, a Dreadnough in a drop pod, a 5 man vanguard squad, 8 Assault marines and a Thunderfire, Devastator squad and his new Whirlwind giving artillery support. The army was lead by a captain and chaplain both with jumpacks. Only the dreadnought in the drop pod was held in reserve.

The Ultramarines had a slightly similar force, only the Whirlwind and a Tactical squad was deployed, with the remaining force - an Ironclad and Venerable Dreadnoughts in drop pods, 5 man Vanguard and Assault Terminators and a 10 man Tactical squad with an Epistolary Librarian mounted in a third drop pod.

As Siph has only one drop pod painted, the drop pod assault was always going to be one sided. The dice off for table edge was won by Siph and first turn was secured by Pornstarjedi. 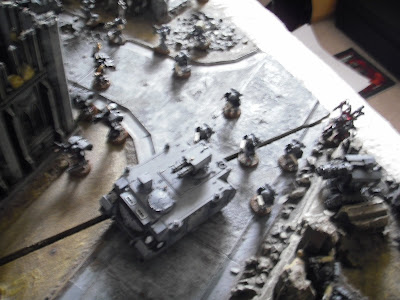 Turn One. The Ultra Drop Pods containing the Dreds crashed down into the Relictor Lines sowing confusion and a bit of dread [two ;) in fact]. The Venerable opened up with his lascannons on the Relictor Captain gunning him down outright after his Iron Halo and Artificer Armour failed to protect (S9, T4 - instant kill). The Ironclad fired its Hvy Flamer and Melta Gun gunning down a Vanguard, a tactical marine and the Jump Chaplain after his Rosarius failed to save him.(Siph - one of those dice rolling 1's days again!) The turn also saw the whirlwind opening up, blasting incendiary missiles into the scouts located in the ruins, by the objective- however only one fell to the blast... Then the Ironclad charged into the remaining Vanguard squad, a lethal combat ensued. Due to the high armour of the Ironclad, only the powerfist sergeant could inflict any harm, however the sergeant was unable to penetrate the metal behemoths armour- the ironclad wasn't in a forgiving mood, and took another 2 marines down. 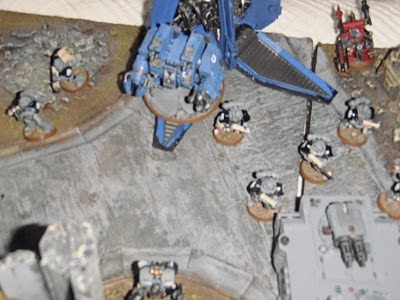 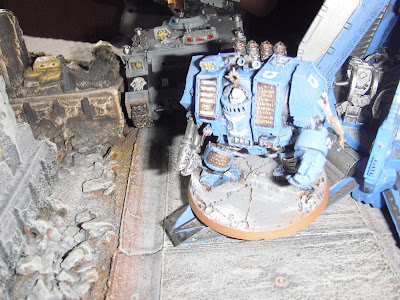 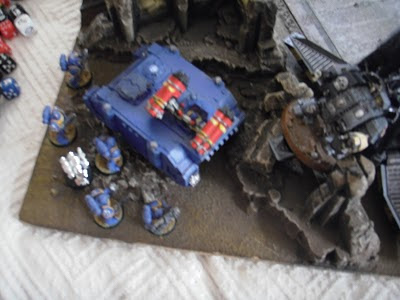 In response the Relictors hit back with drop pod of their own- aimed directly into the ultramarines deployment zone, the dp landed within the reach of the whirlwind, and tactical squad holding the objective. Other movement saw the tactical marines moving in to close on the Ironclad, the sergeant also had a powerfist- could the Ironclad survive? The whirlwind of the relictors fired upon the UM tactical squad moving forward from their deployment zone- however the shot missed by some way. The thunderfire had more luck, killing one of the marines. The razorback fired upon the venerable dreadnought, and inflicted a stunned result after penetrating the old one's armour. The newly arrived Relictor dreadnought wasted little time, and opened fire on the whirlwind, and tactical marines, the heavy flamer killing one marine, and stunning the whirlwind crew. Unable to engage the melee with ranged shots, a tactical marine armed with a melta gun fired upon the drop pod that housed the Ironclad, destroying it, and the precious locator beacon. The Relictor dreadnought then charged into combat with the whirlwind, this time the tank was destroyed. (Poor dice again for Siph...) The Ironclad was then charged by the tactical squad, with the hope that 2 power fists, were indeed better than one, and finally destroy the Ironclad, however the marines were unable to best the might veteran (who has a warhound kill to his name in single combat :0 Jedi) with the Ironclad claiming the lives of another 2 marines.

Turn 2.
Turn 2 saw the arrival of another UM drop pod, this time housing a 10 man tactical squad, and the Librarian. The DP landed in the middle of the board, with the marines splitting into 2 combat squads, also that turn saw the arrival of a 5 man vanguard squad which homed straight at the Relictors dreadnought. The turn also saw the now 4 man tactical squad move into position to assault the scouts that had infiltrated forward. The shooting phase saw the newly arrived tactical marines flaming the Relictor Combat squad that had sneaked by the ironclad, killing 2. The venerable dreadnought fired upon the whirlwind- but missed the tank from point-blank-range!! Close combat saw the ironclad again taking on all comers, this time felling a single marine. The Relictors in response could only immobilise the dreadnought. The other combat saw the UM tactical marines charging the scouts, and killing all 5. The vanguards were unable to penetrate the Relictor dreadnoughts armour. 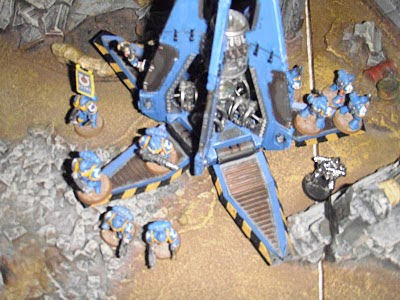 The Relictors were now short in number, the assault marines moved into a charging position around the Ironclad- could a third power fist take the beast down? The whirlwind fired at the drop pod in the middle of the board, scoring a hit. the blast took out the drop pod, and 2 marines. The assault phase- two major combats were taking place, the first saw the Ironclad once again survive the attention of the Vanguard sergeant, the tactical sergeant (+1 tactical marine) and the assault sergeant (+ 6 assault marines) the other marines had to watch- due to being unable to penetrate. In response the Ironclad took the lives of another 2. Over the other side of the battlefield, the UM Vanguard Sergeant, armed with a thunderhammer, smashed the Relictor dreadnought with a might blow, catching a major power line- the dreadnought exploded, killing a vanguard who strayed to close. 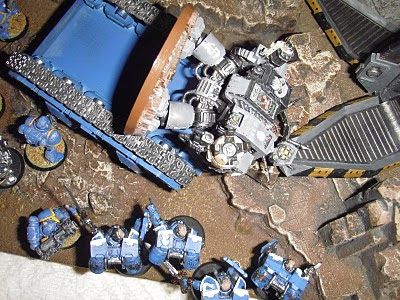 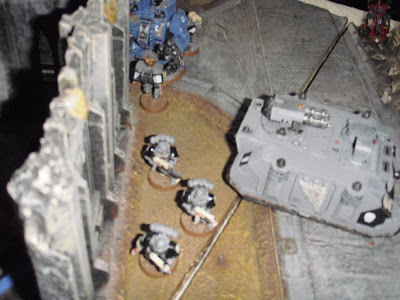 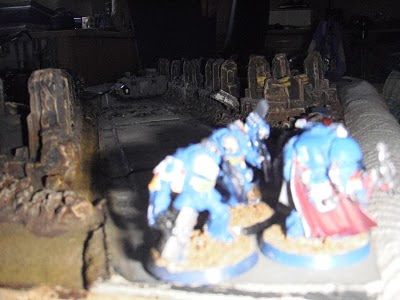 Turn 3.
This saw the arrival of the Ultramarine Assault Terminators, however due to a mishap the terminators arrived miles from where they were expected to arrive (Siph was able to place them where ever he wanted) thus, the termie's were place way back into the UM deployment zone and effectively out of the game. The librarian moved into position to see the relictors combat squad and the Vanguards moved forward to try to get to the center objective. The second UM tactical squad moved away from the dead scouts, and moved to take position behind the center objective. The shooting saw the Librarian 'Smite' the remaining 2 Relictor Combat Sqd marines into pieces. The UM Venerable dreadnought took aim at the whirlwind and stunned it. The close combat again centred on the ironclad, could he survive yet another round... Incredibly, yes he could and took out another two assault marines for good measure! 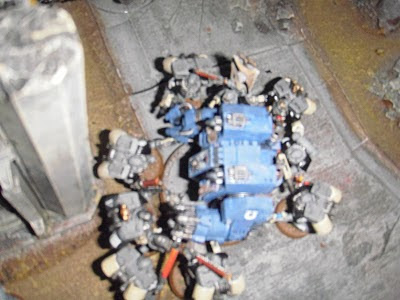 The relictors turn 3, saw little movement, but lots of shooting. The land speeder moved into position and fired into the sole survivor of the tactical combat squad holding the center objective, however the multi melta shot hit, but did not wound the marine (Siph rolled a 1 to wound... lol) The thunderfire fired into the second combat squad holding the objective, and killing all. The scouts in the ruins tried to sniper fire the 3rd combat tactical squad moving toward the center of the board, however all marine stood firm. Again the close combat saw the Ironclad defy all odds, this time no marines were killed, the Ironclad was penetrated, and was only shaken for the next turn. 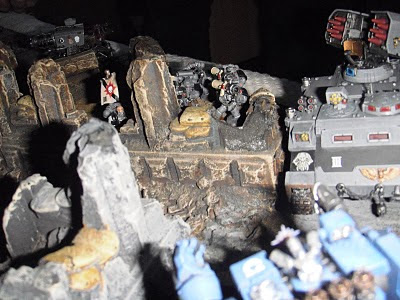 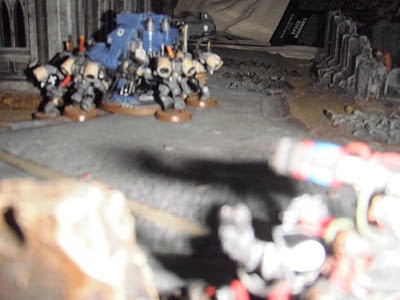 Turn 4, potentially the final turn. The Ultramarines moved forward with the Vanguard and terminators charging at full speed towards the Relictors, however it was going to take another turn or 2 to get anywhere close! The combat squad of tactical marines got into position, claiming the center objective, the sole surviving combat squad member from the second dp wave fired his multimelta at the razorback, the shot missed due to the smoke from the onboard grenade launchers. The Librarian charged the razorback and destroyed the tank in single combat, the Ironclad managed to survive another turn of combat, this time again killing another relictor!
Turn 4 for the Relictors- due to most of the relictors being tied up in combat with the Ironclad, or dead there was little of the force left, however the Landspeeder sped round into the center of the board to contest the final objective- and fired upon the 4 man tactical squad holding the objective. all 4 died under the combined weaponary of the multimelta and thunderfire. The Devastator Sqd near the Venerable Dred opened up with 4 Krak missiles, only one penetrated and shook the Ancient Warrior. (i know, bad rolling ...again! But this was because of the Venerable re-roll). The combat with the Ironclad again was a stalemate. 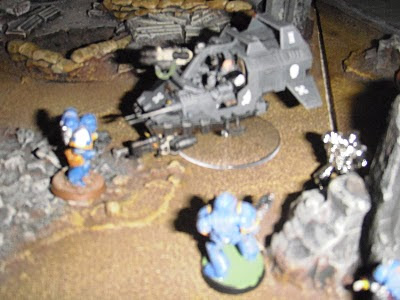 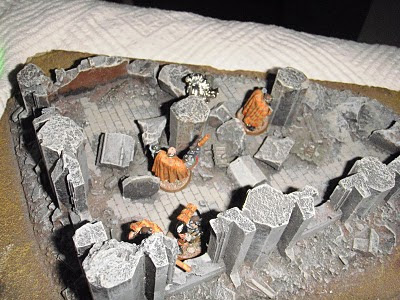 Siph rolled to see whether the game would go onto a 5th turn, however a 1 was rolled (typical). All finished another draw!!

Jedi- the man of the match has to be the Ironclad dreadnought. The ability to hold up virtually an entire army single handily was amazing. The initial turn was pivotal. Having two dreadnoughts arriving on turn 1, into the oppositions deployment zone was key to changing the course of the battle. Siph had to change his entire plans, and the dreadnoughts managed to take out both characters in the first turn-much to my enjoyment! 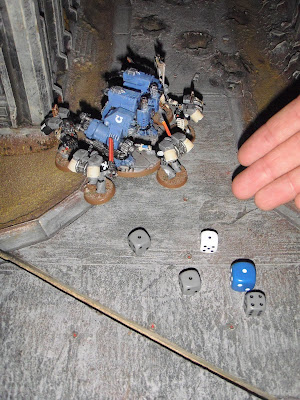 Siph- well I never really got going. It was in my face from turn 1 and losing both characters was a bit of a blow. I do blame some part on the dice, who could penetrate an Ironclad over 5 times and still get nothing but an immobilised. But, you got to hand it to Pornstarjedi, those DP assaults are deadly and he knew it! We both learnt a few valuable lessons as well as had a good time. The Thunderfire proved a marine killer for me but the landspeeder kept me in it with a quick dash to constest the objective.

A great battle, the Ironclad will be getting several more honour markings!
Posted by Lord TITANium Halfpenny