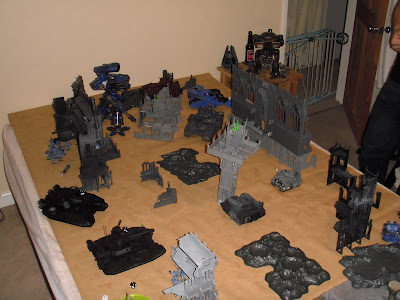 Once again the forces of the Ultramarines and Relictors drew swords, both armies brought along several considerable units from requisitioned from the Zevas IV Planetary Defence Force and garrisoned Titan Legions.
The battlelines were drawn across the ruins of the former capital city which through earlier battles had been reduced to ruins. The Relictors were searching for relics in the ruins of the Shrine of the Aquila temples when the large Ultramarine and Super Heavy force came at them. The Relictors won first turn and struck back with 3 Baneblades and a Warhound and Linebreaker Squadron. The Banes opened up on the Reaver taking down some Void Shields but failing to penetrate the defences, the Warhound fired at the greatest threat - a titan killing Shadowsword and destroyed its main gun with the Plasma Blastgun on maximum power. The relictor Predator and Dreadnought fired at the accompanying enemy Baneblade taking out its main cannon. 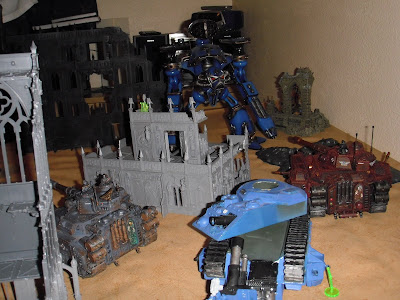 The Ultramarine force kept up the initiative and launched a drop pod assault with its Ironclad Dreadnought landing at the feet of the Warhound. The Reaver opened up its main weapons destroying one of the three enemy Baneblades and an Apocalyptic Barrage on the Relictor Linebreaker Squadron, destroying two of them. The shadowsword carried out damage control and repaired the main gun whilst the Reaver regenerated 2 of 3 collapsed voids. In the assault phase, the space marine hero within the Ironclad showed us why he should have been saved from death and carried out a near suicidal charge into the Warhound - the warhound struck back at the Ironclad stunning him but not before the dreadnought sheared through one of the Warhound's vunerable knee joints bringing the mighty War Engine to the ground in a mighty explosion - when the dust and flame dispersed, the ironclad stood alone in a smoking crater. 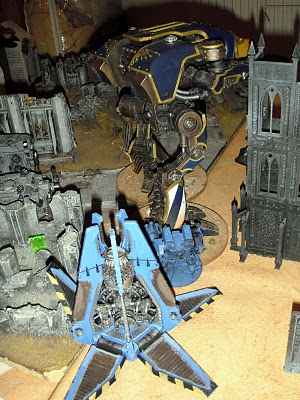 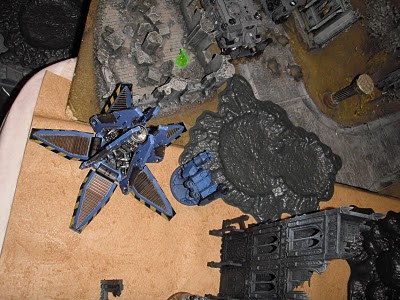 This was the beginning of the end for the dubious Relictors, the Assault Squad and Chaplain holding a recovered Legion Relic were lost to the warp in a deep strike mishap, whilst the Sternguard in a drop pod assault behind the Ultramarine lines failed miserably in the shooting phase and overheated 6 Vengeance bolters killing one of their number and only slaying 3 enemy. In a response to the titan killing Dreadnought, the Relictors fired a point blank Demolisher round from the surviving Vindicator killing the heroic space marine ancient outright. The surviving two baneblades turned their guns on the enemy baneblade taking its last structure point and destroying it in an apocalyptic explosion. The Relictor Dreadnought and Predator fired at the Shadowsword destroying the repaired Volcano Cannon once again.
In response, a second Relictor baneblade was destroyed by the Reaver, a second Baneblade loyal to the Ultramarines flank marched behind the Vindicator and Relictor troops holding an objective and started to open fire on the Relictor marines but misjudged the short range, killing 3 of the troops but the misfire also destoyed the main cannon in the large explosion. The Ultramarine Captain with the Legion Relic and Assault troops charged the Relictor sternguard, slaying them all but one - with the Legion Relic and finishing of the remaining veteran with the accompanying assault squad. It was not going well for Siph! 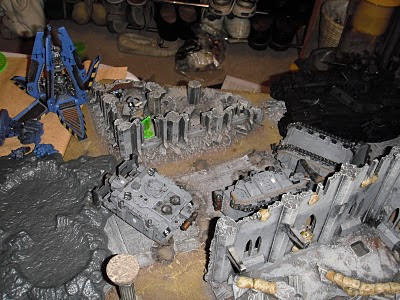 Siph only had a squad of Terminators and some Tactical Marines left in reserve against the unstoppable Reaver and Ultramarines. The loss of the Relictor Legion Relic (resulting in minus one to any objectives held) and the Warhound and 2 Baneblades was too much for Siph and he called the battle there and then. This was a well earnt and first victory for Pornstarjedi against Siph, and an excellent result for the Ironclad Drop Pod assault!

Points we learnt from Siph's first foray into Apocalypse and Pornstar's second, were to be wary of close assault on our 'invincible' and highly expensive super heavy walkers. Baneblades act better in large groups! and are great fun to play. Even a humble dreadnought can seriously hurt an over confident foe - punching far above it's weight. Deep strike is a risky business without Homer Beacons or Drop Pods. We also think that Apoc battles will be better played against bigger forces, and different ones, we will try to arrange an Apoc at our LFGS with some other gamers as well. We look forward to getting our FW Reaver's done so they can bring as much death and destruction to the enemies of the God Emperor!.
Posted by Lord TITANium Halfpenny