Again, the mighty Ultramarines clashed bolter and sword against the heretical Relictors. Both Space Marine forces were given the task to secure the once thriving capitol city of Zevas IV.


Two 1200pt armies would battle over the ruins looking to take and hold 4 key objectives. There was one in each corner, just within deployment zones. The Ultramarines were first to deploy, a five man scout sqd, and a five strong Terminator assault sqd were positioned in the middle of the UM's deployment zone. A Whirlwind, and a 5 man Assault sqd with a jump pack/relic blade equipped Captain were positioned to the left side. The Relictors deployed within the ruins in the centre, taking both objectives. The Thunderfire Cannon was positioned in the middle of the R's deployment zone. A Razorback sat on right flank. An Assault sqd and Chaplain deployed slightly to the left. In reserves the UM had 3 drop pods, 2 containing 10 man tactical sqds, and 1 with a dreadnought. The R's had a 5 man Terminator assault sqd, and a drop pod of 7 Sternguards. Let battle commence!! 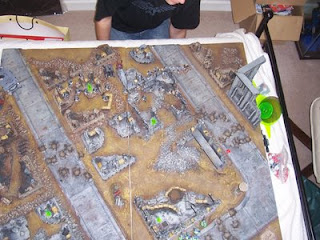 Turn 1... Ultramarines first turn started with crash and a bang as 2 drop pods smashed down into the Relictors deployment, using the drop pod assault rules. A dreadnought and 2, 5 man combat tactical sqds charged out ready to take it to the Relictors!! Both the Scouts and the Terminators moved forward to take the objective. The Whirlwind took a shot at the Relictor marines in the ruins, wounding two, but only killing one. The shooting of the tactical combat sqd and the dreadnought was very poor, scoring hits, but no casualties. 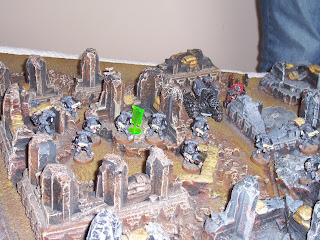 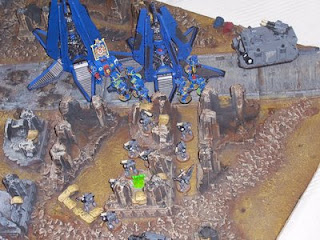 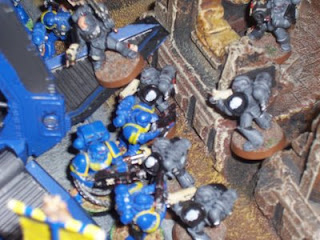 The Relictors turn had little in the way of movement, just lots of shooting. The Razorback aimed at the Whirlwind however the dice gods weren't with Siph, as the twin-linked shots missed (a common theme for Siph during the game!) The tactical sqds took aim at the newly arrived dreadnought and UMs, taking only one marine down. The Thunderfire aimed at the sqd of Scouts and blasted 4 of them to dirt (Str 6 Heavy 4, 5 scouts under template, 20 hits!). The Scout sergeant survived.

Turn 2... The drop pod UM Tac Sqd and Dred open fire at the nearest Rel Tac Sqd and Razorback destroying the tank and slaying 2 marines. The Whirlwind takes aim at the thunderfire, with a direct hit! a four is rolled for armour penetration thus only a glancing hit (I wished I had consulted the rules properly- a glancing hit on artillery unit destroys it outright!) a 6 is rolled on the vehicle damage chart, which is reduced to an immobilised result, the return fire from the Relictor lines and support from the Thunderfire sees the UM combat sqd being annihilated. 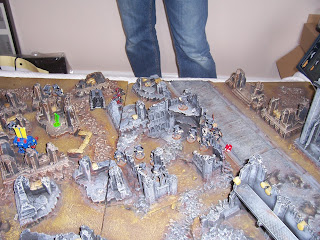 Turn 3, The third drop pod arrives for the UM, the two combat sqds run towards two objectives, Terminators and the assault marines move steadily forward. The Dreadnought charges into the ruins taking on the tactical squad in close combat. Two marines are bested and the Relictor unit retreats (an inch from the table edge... if only!) but only after immobilising the Dred with a well placed combat blade! (Siph forgot SM had Krak grenades). The Relictors fought back with a drop pod of their own, seven veterans jumped out and rapid fire Vengeance Rounds blast the closest tactical combat sqd to pieces (got to love AP3 rounds). The Thunderfire fireed into the UM Assault Termies and kills one of them. The Relictor Chaplain and Assault sqd follow this up and leap into combat with the UM Assault Termies taking 2 more Termies down and the UM veterans flee from combat - unbelievably the Relictor Assault troops fail to catch them so consolidate toward the UM objective held by the lone Scout sergeant. 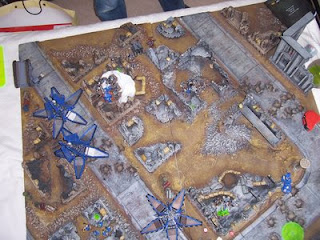 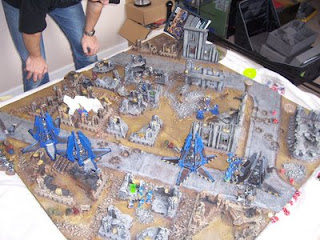 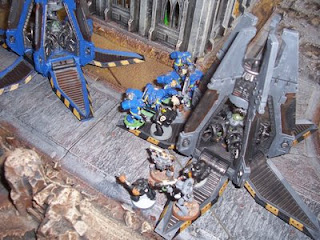 Turn 4, Seeing the balance sing massively towards the Relictors, the UM Captain separated from the assault squad and charged towards the 4 man tactical combat sqd holding the objective. In a bold, almost suicidal move, the remaining five UM assault marines charged headlong into the Sternguard. The Sternguard veterans hit back (with their statline 2 attacks) and annihilated the CC troops! Both objectives in the UM deployment zone are taken by the Scout sergeant and the combat tactical sqd from the third drop pod. In the Relictor turn, the other combat sqd near the Relictor objective charge the UM Captain, the Assault Termies finally make it on to the board and charge straight into combat with the immobilised UM Dred smashing it asunder under the 5 Thunder Hammers and the nearby survivors of the rallied Relictor combat squad claim the objective! Elsewhere, the Assault Marines and Chaplain hack the UM Scout Sergeant to pieces and contest the objective from the UM leaving it one objective a piece. If the Tac Sqd engaged with the Capt hack him down they will claim the game - 9 hits, 9 saves, 2 die and combat continues for another turn. 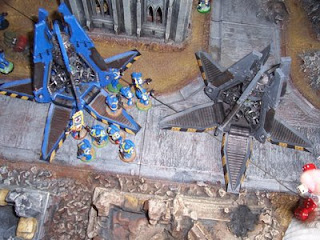 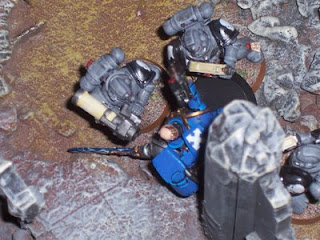 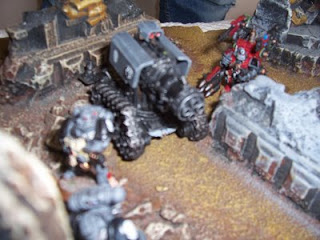 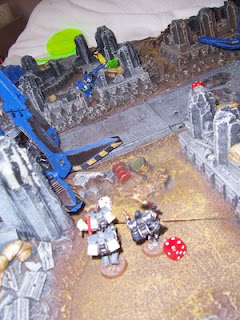 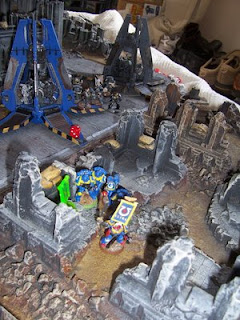 The Games finishes, as the dust settles, 1 objective each! another draw...

Jedi's training points- Thunderfires can be lethal, however the beast should of been destroyed after the Turn 2 Whirlwind salvo. Drop pod assaults are a great way to start a battle, two drop pods crashing down and troops charging forward from the start, however these units are vunerable to getting destroyed in the oppositions next turn. My biggest mistake however is with lightning claws, For charging I should have 4 attacks, with a re-roll for failed hits to wound.. not 2 rolls!!

Siph's training points - Plasma Pistols (and all Pistols) are effectively Assault 1 up to 12" so sergeants can move, shoot and then assault. Sternguard can disembark (move) from a drop pod and rapid fire their bolters up to 12" but can't assault on the turn they disembark. Most importantly - reserve rolls are carried out for each unit in reserve, not one roll for everything - could of got those assault Termies on a lot sooner! The Chaplain should have separated from the assault sqd and assaulted the remaining UM combat sqd holding their objective, thereby contesting it in turn 4.

Jedi's unit was my captain, a suicidal charge into a full tactical squad, with a thunderfire cannon in waiting turned the tide, in contesting an objective.- I suppose thats why he is the captain!

Siph's unit of the match goes to the Thunderfire Cannon and Techmarine. 4 Scouts, a whole Tac combat sqd and a Termie casualty, not bad shooting for 100pts.