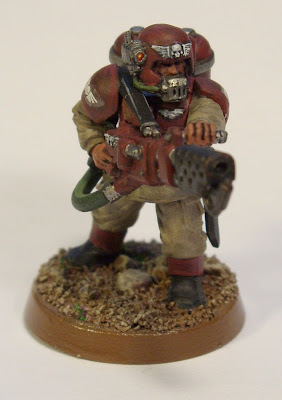 What do you think of my forthcoming (side) project IG paint scheme? I love the Cadian Shock Troop models soo much I want some to accompany my FW Death Korps of Kreig, besides they are a lot cheaper too and ever since RT days, this is how I envisaged the Guard looking. I have an Emperor's Fist Tank Company already made, ready for some painting in the distant future. These guys (only a few squads to start!) will accompany the already done Vraks Hellhound posted earlier, so it was rather fitting I thought to post the flamer trooper first, I'll get a group shot of the first 10 when finished, then it's back to Relictor grey. 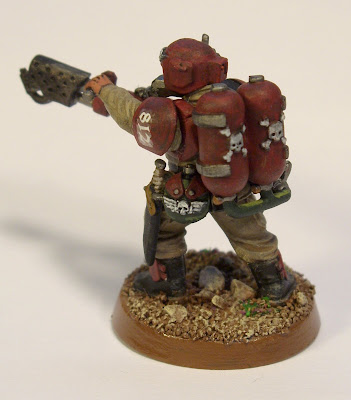 They are basically following the GW online Cadian colour scheme but with Scortched Brown basecoat under Scab Red instead of Dark Angel Green/Catachan Green. Uniform cloth, face and details all as GW describes in its 'Painting Your Imperial Guard' step by step tutorial. Flesh is just Tanned Flesh over Dark Flesh, simple scheme to keep the speed up - guardsmen don't come in small groups! I've used the Vox head for this flamer as the fumes/whoosh of the flamer mean he needs a respirator/vox type mouth piece. 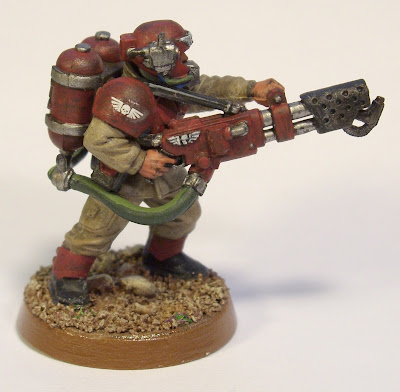 Still progressing (albeit very slowly) with the Techmarine for the Thunderfire previously posted. Stick to one project at a time Siph...
Posted by Siph_Horridus