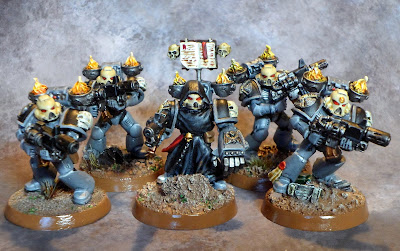 Hello All, thanks for dropping by. These fine Battle Brothers were an eBay job, re-painted and re-based in part, and modified to have a squad of 10 Combi-Melta Sternguard, for when you absolutely have to melt to slag that tank! Whether I will field 10x Combi Melta Sternguard is another question, however I have that choice now :) 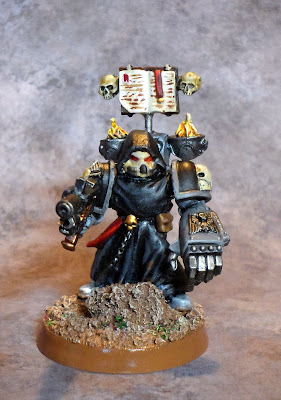 The Sergeant nods towards his Dark Angel heritage, Relictors are from DA and UM genestock, and quite shady Chapter too, fighting Chaos with Chaos when the opportunity rises, meaning until recently they were Excommunicate Traitorus, only recently been accepted back into the fold by Roboute Guilliman, desperate times indeed. 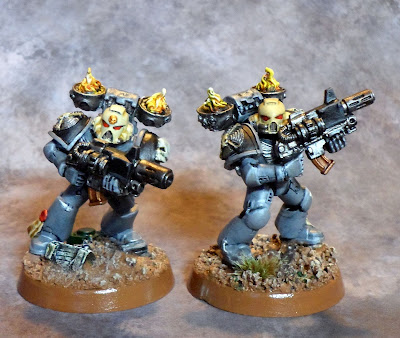 I subtly changed some flamer nozzles back to Melta Gun barrels with the plastic combi-weapon barrels from the bitz box, you can see the size difference between the two, the plastic being slightly thinner. 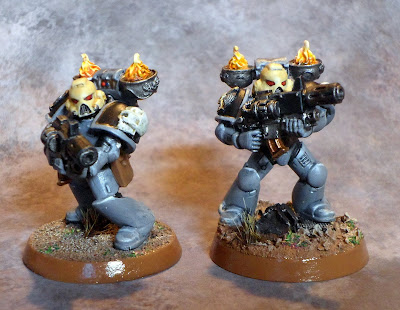 The eBay job had a grey scheme laid down that was quite a good match, however to fit my scheme and standard I extensively tidied up the highlights, re-painted the leather pouches, grenades, weapons and heads. And generally tidied up the greys and trim and then re-based either on resin bases or fitted 32mm adapter rings to the existing 25mm bases. Other than a basecoat, these were pretty much re-painted and took longer due to the re-basing than if I started from scratch! But I loved the braziers and the squad look, and the bargain price too! 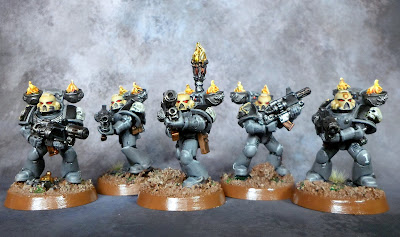 The second demi-squad is led by a Marine with a burning Brazier, taken from another miniature of the eBay lot, and pinned to the backpack. He can act as a Sergeant if indeed I run as two squads. 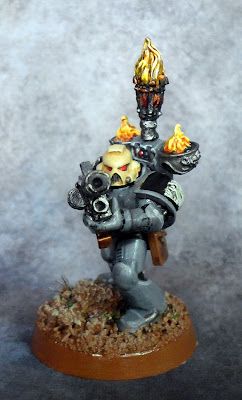 I also drilled out all the dual barrels for the entire squad, the helmets were re-painted bone colour to signify the Relictors Veterans - Dheneb Stone base, Ushabti Bone layer and Sepia wash with a final highlight of Dheneb Stone on the prominent crest. 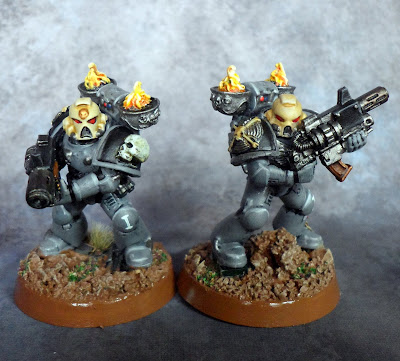 These veterans have the converted side-skull of the Relictors Chapter badge, unlike the majority of the army which I cheated with and used the Skull decals from the SM Transfer Sheet. Its too long ago to go back and change 200+ marines, so these are unique in the army with the exception of the 4th Company Command Squad. They also sport the metal Crux Terminatus shoulder pauldrons to denote their veteran status and skills with the heavier Tactical Dreadnought Armour. 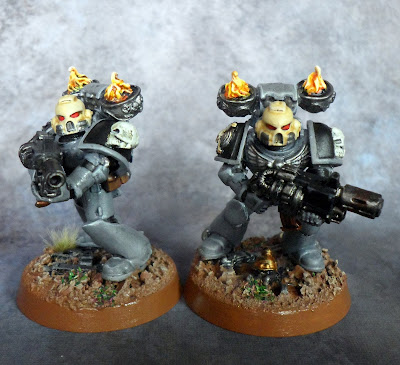 The brazier backpacks are converted using plastic backpacks with the stabilizer jet nozzles cut off and replaced with metal braizers.

And a shot of the entire tooled up squad. An excellent addition to the army if I want to have a Drop Pod Assault theme or something for a battle - these will make effective heavy armour hunters, or Aggressor hunters!