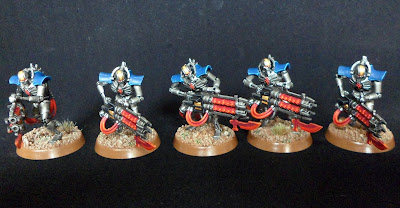 Hi Readers, thanks for dropping in. I am continuing to build my Necron Forces, with a new Codex in hand I am keen to hit the Necron to-do pile and increase my options to field some forces.  Following on from the other 10 I've completed the last few weeks, these are the final Gauss Blaster armed Immortals, I do have 5 more from the Forgebane Boxset but I think 15 is enough, so I may arm them as Tesla Immortals so I have a big squad of 10 of them as 5 doesn't seem to cut it. 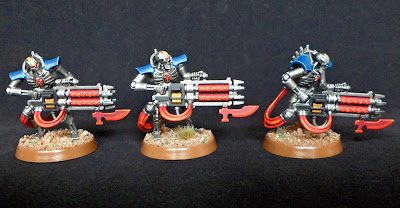 Again, I followed the same as the previous squad, Gauss red energy blades and the gold forehead to mark them out as more elite warriors over the plain Necron Warriors. The blue is Kantor Blue highlighted Temple Guard Blue. The bases were made 32mm using TTAdapters from 25mm bases and painted in my usual recipe of Mournfang Brown, Karak Stone and Ushabti Bone 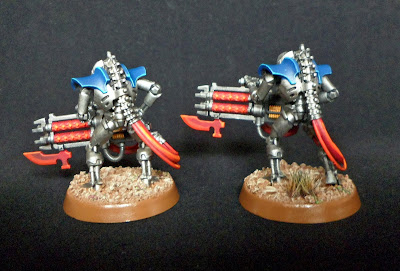 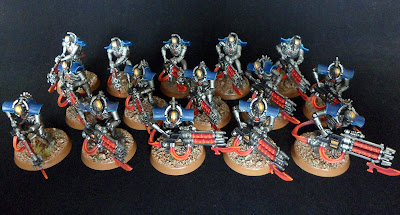 And a shot of the whole lot of Gauss Blaster armed Immortals, the kitbashed back row fit in nicely with the ten original ones. Nice to have some massed Gauss Blaster options now. Happy with these, now off to maybe build that Canoptek Cloak Cryptek and some Lychguard...

Cheers for dropping in, thanks, Siph.
Posted by Siph_Horridus