Hello! thanks for stopping by,

I'm having a week off the Reaver, and decided to make a dent in my Daemon force 'to do pile'. I needed some 'bigger guys' for the upcoming battle at WHW with a Chaos vs Imperial battle planned at Warhammer World.

First up, a Great Unclean one - this is one of my favourite models, with links to the original model, just a lot bigger!

After an undercoat of Death Guard, I then dry brushed Scorpion Green over the model, and used Dark Angels Green to add shadows. I then gave the model a couple of washes with Agrax and Biel-Tann to add definition to the dry brush.The wounds were painted with a bugman glow, edged with Wazdakka red. Averland sunset was used to the very edge of the wounds to show the fat layer. Boils were also picked out with the same colour. Happy with the progress so far. 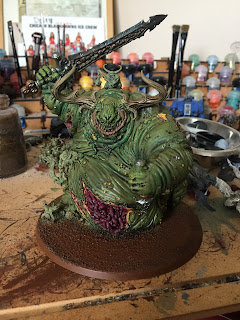 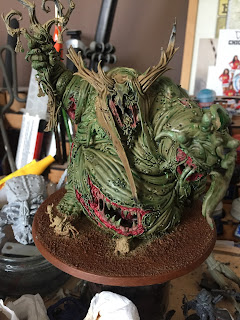 Cor'bax is simply a Zandri base, with sepia wash, and then I will detail the model - I was keen to avoid 'green' as it could make him look like a GUO, rather than a daemon prince. 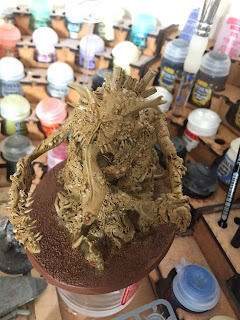 Thanks for looking! Cheers, Lord Halfpenny.