The Beginnings of a Genestealer Cult - Space Hulk Hybrids 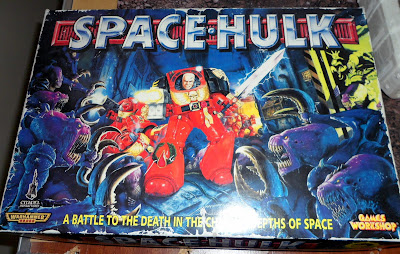 Hobby Butterfly strikes again! I still have my copy of Space Hulk (2nd Edn circa 1996) inside the box I have the Genestealer and Deathwing (circa 1990) expansions too, extra rules, tiles and more importantly Miniatures. In this delightful plunge into the closet of doom - I retrieved the beginnings of a Cult... the 2nd Generation Hybrids from the Genestealer expansion. (I've also two copies of Space Hulk Circa 2009 - one yet to be unwrapped!) 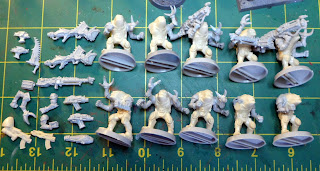 Here are the first of my Genestealer Cult miniatures, they will be mixed in with the modern Hybrid models and armed with a mix of old and new weapons, here they have the original 'chaos' Heavy Weapons for taking on the Deathwing Librarians in the Space Hulk expansion, Chaos Conversion Beamers, Missile Launchers, Autocannon and some Ork Bolters and Bolt Pistols, Ork Plasma Gun, RTB01 Bolters and an Ork Chainsword... 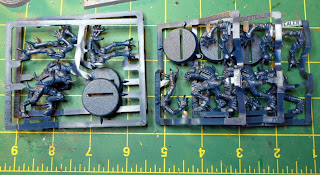 Also with so much Space Hulk, I still had plenty of Purestrain Genestealers on the sprues still, so 5 of them (there are about 50 more if needed!) will also move across to the Cult.

Hmm, what Hive Fleet, well I love the simplicity of the Hive Fleet Kraken tutorial from Tale of Painters and the scheme will allow me to fit my old Imperial Guard Leman Russ Tanks and Squad from way back when I fancied painting something different. These will be incorporated with some Genestealer Cult frame bits icons, and head swaps and Knives, then I'll finally actually have a use for them on the battlefield, I never was going to build an entire Guard Army! 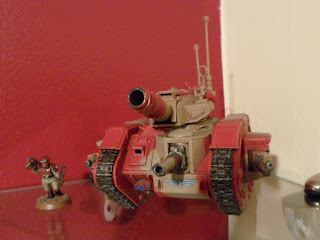 So, for the cost of nothing so far, I have the start of the Hive Fleet Kraken Genestealer Cult - an insidious beacon for the approaching doom... don't expect rapid progress like Mordian7th, my hobby butterfly flutters around jobs to keep me interested!

Right, off to go write a GW Gift List and email my nearest and dearest...