Morning peoples - after a bit of a lull, we are back to making progress on the Warhound.

The last post was about finishing the torso paint job, so now we need to look at attaching it to the legs - but first the head needs attaching and some cabling needs connecting between the head and torso.

The head was simple enough, I had already drilled it and pinned so that I could dry-fit it - so this only needed gluing.

The cables come in long 6inch straight strips, so its up to the modeller to measure, cut and bend as needed. I purposefully cut mine long and then out came the hairdryer to heat and bend to shape. It was then much easier to trim the final mm's off to get them to fit. Lastly they were painted up in the same style as the other cabling on the Warhound. 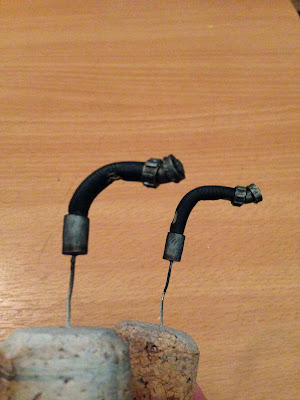 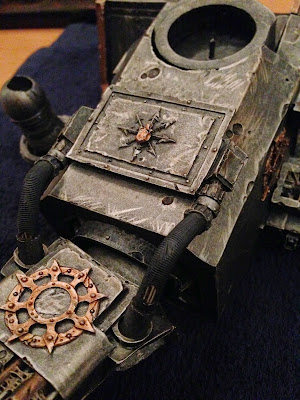 Next up - attaching the torso to the waist. I had already drilled and pinned where the parts would meet (you can see it in various pictures of the torso and legs, so that it sat relatively securely, but the single pin still allowed for rotation (which we don't want). So I drilled a small pilot hole in an obscured divot (you can just about make out the pin shining a little in the pic below - directly above the waist line with squares bits) for pinning laterally. This meant that when glued, I could drill and pin from another angle to make the model even more stable. 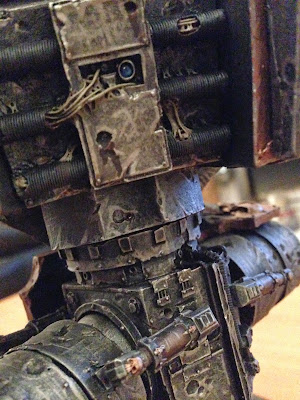 Lastly, now that I no longer needed to be able to place the torso on its roof, the spikes were painted and attached. 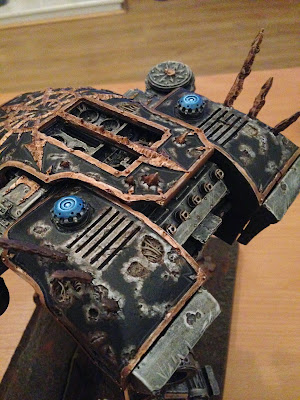 And there you have it, all of a sudden the Warhound is looking pretty darn close to complete! Just the weapons left... 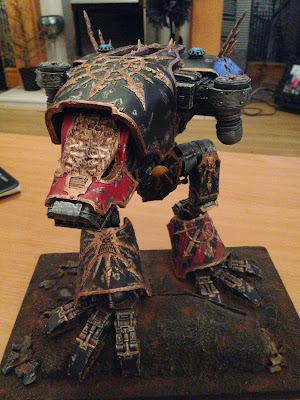