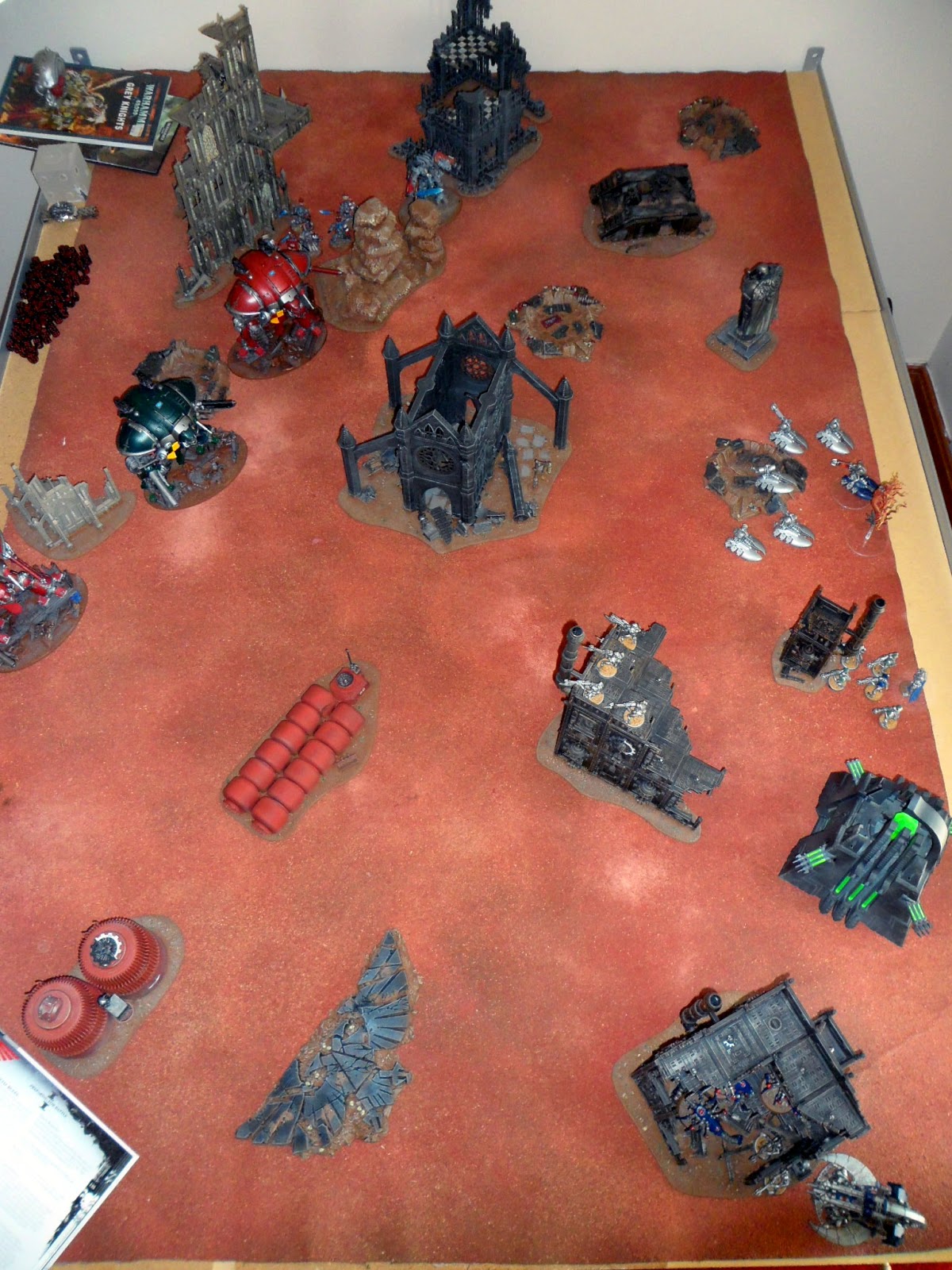 Lord Halfpenny came over for a battle and used his now painted and based Imperial Knights, with a third I didn't know about! Plus Draigo and some Paladins and a Dreadknight and Assassin.  I had the Necron forces I had painted so far plus some part painted Destroyers and a Monolith to make up the numbers - I wanted two more Annihilation Barges but I haven't yet made them!  But as my secret weapon, I had 4 Voltaic Staff armed Crypteks - my sole personal mission was to destroy the Knights, it didn't matter whether I won the actual mission or not!

We rolled for edges, Vanguard Strike and setup and Lord Halfpenny got the choice and first turn, and I failed to seize the initiative. It was Big Guns Never Tire using D3+2, 4 Objectives and Heavy Support choices would offer new VPs - I had two (Monolith and Annihilation Barge), Lord Halfpenny 1 (Dreadknight). 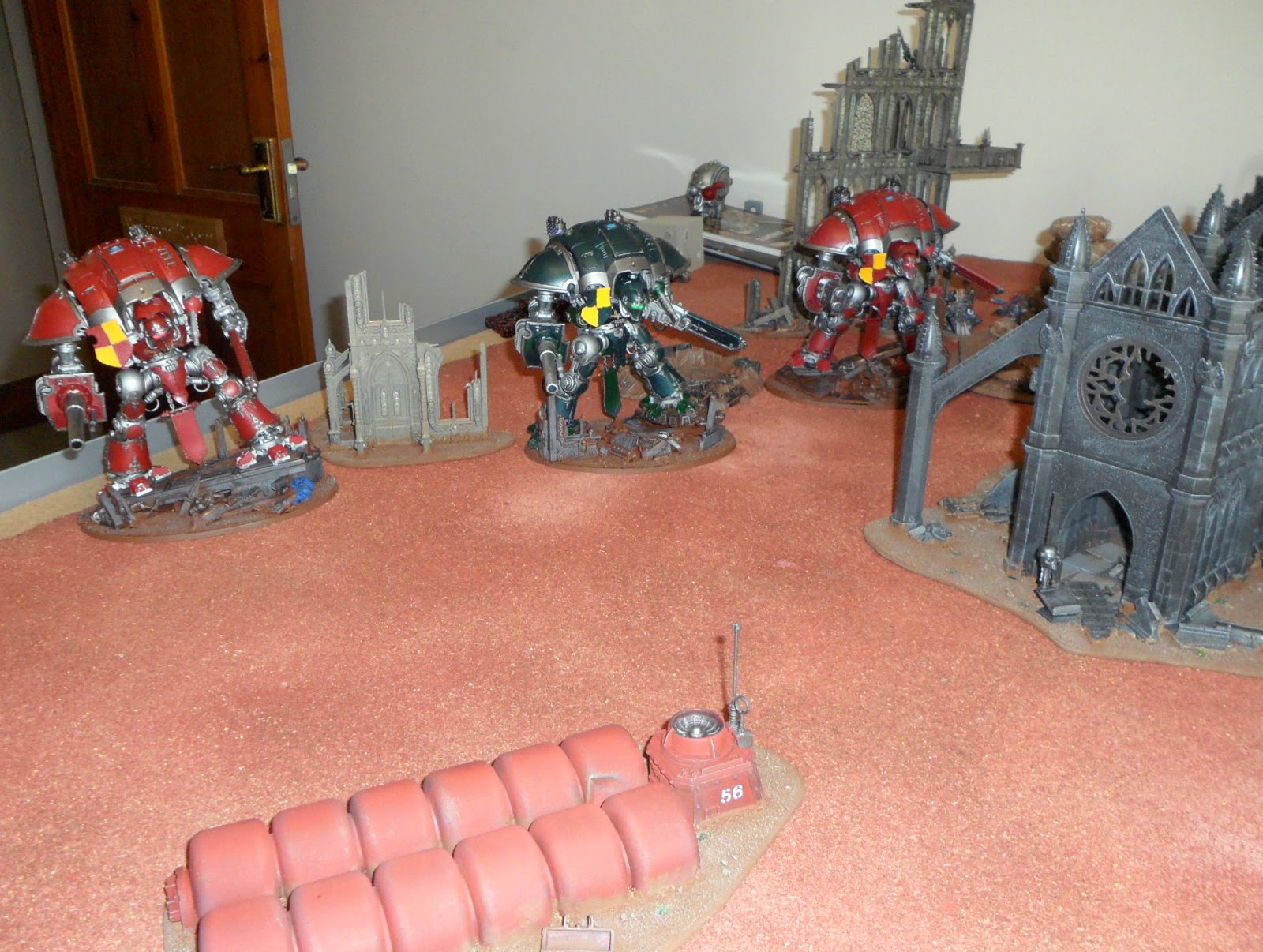 Lord Halfpenny advanced across the board with his Dreadknight and 3 Imperial Knights, the Senschal open fired on Imotekh and his immortals scattering wide, the second Knight followed suit, downing 3 Immortals in the mechanicus building and the Dreadknight open fired on the Destroyers, but re-animation protocols bought him back. 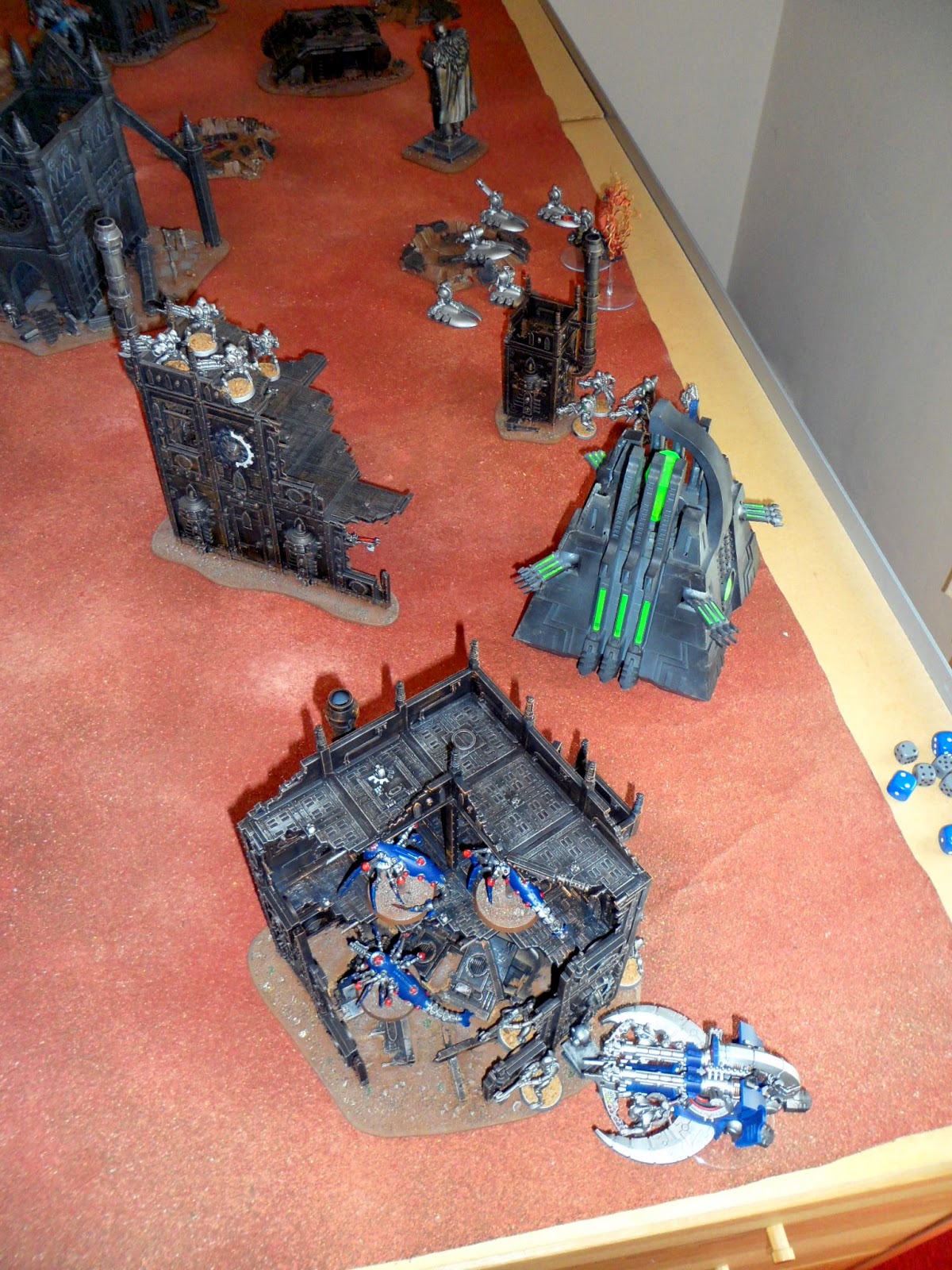 The Necron Turn one see's 2 Crypteks open up on a Knight with Voltaic Staffs, hitting him 4 times and glance on 2+, Pen on a 6, rolling 4 ones!! No damage.... dice gods be cursed! Imotekh Lightning Storm fres better stripping 2 Hull Points of the Knight Paladin. The Monolith follows up with it's Gauss weaponry failing to glance. The C'Tan using a Thunderbolt strikes the Knight Errant but fails to get through his armour, whilst the Destroyers strip one hull point with their Gauss weapons. Nightfighting also ends so no more Imotekh Lightning... 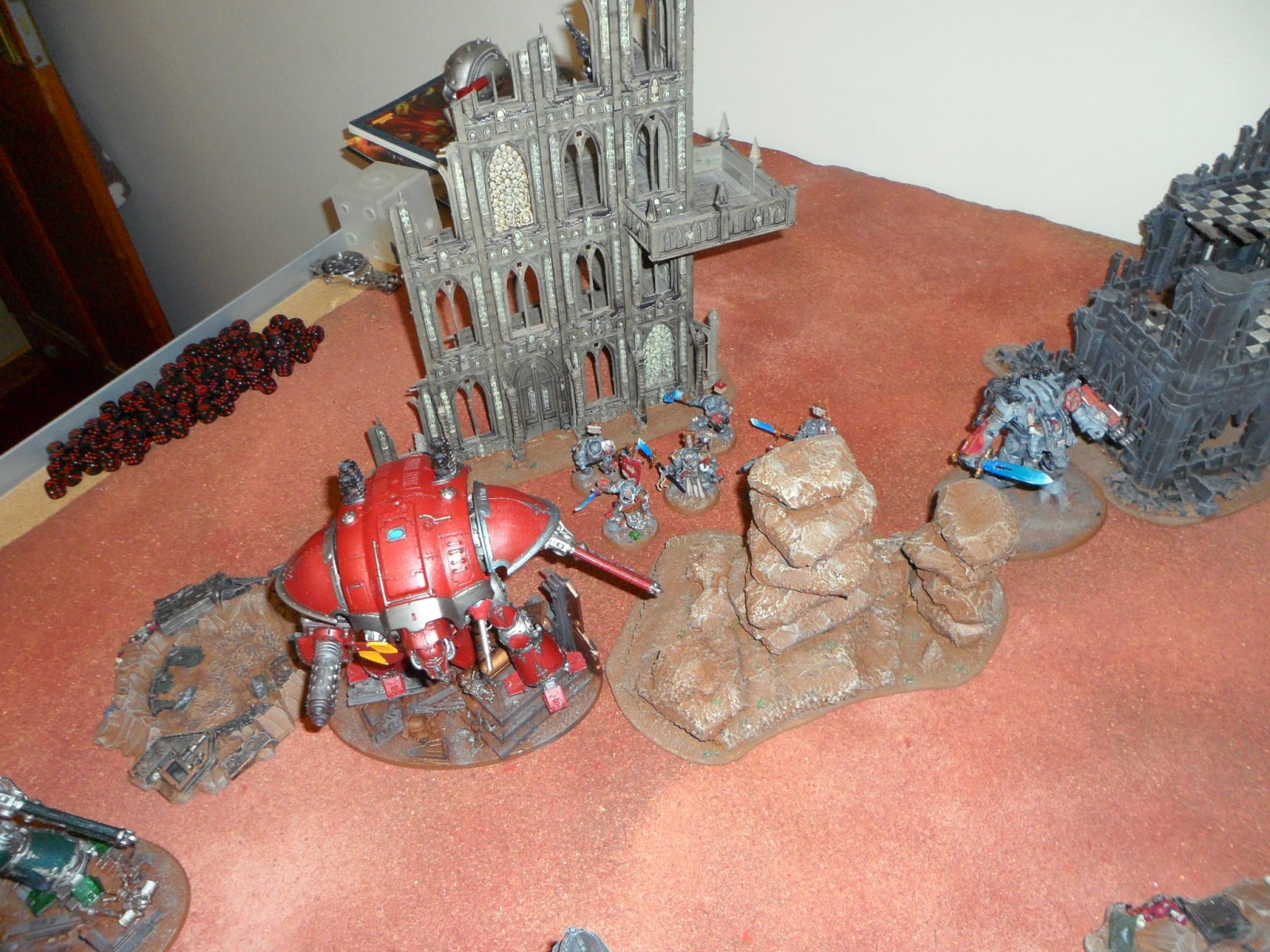 The Knight Errant takes down 3 Destroyers, but two re-animates. Elsewhere, the other Knights open fire on the Tesla Immortals and charge into combat with the Necron Warriors in the mechanicum building wiping them out with the exception of one. The Knight Errant advances against the C'Tan Shard, tying in combat - the shard hitting 4 times but at T7, failing to penetrate. 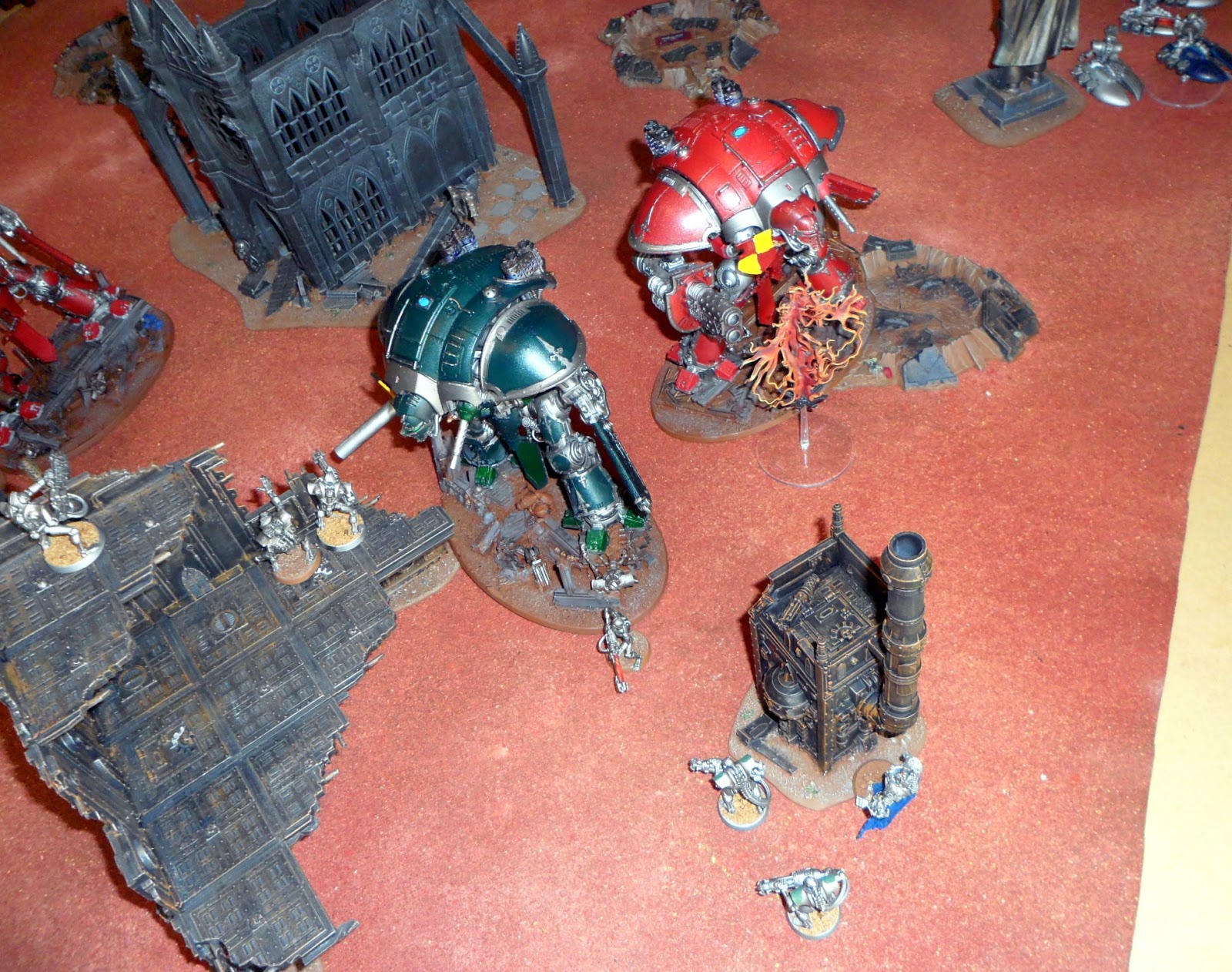 The Necron turn 2 saw one Night Scythe coming on and along with the Annihilation Barge, strip the Knight Paladin to one hull point. The disembarked Cryptek and his squad finishing off the Knight and killing one of their number in the explosion, also hitting Draigo but he saved. The monolith opened fire with its particle whip and Gauss against Draigo and his squad advancing in the centre, Draigo making all seven saves. 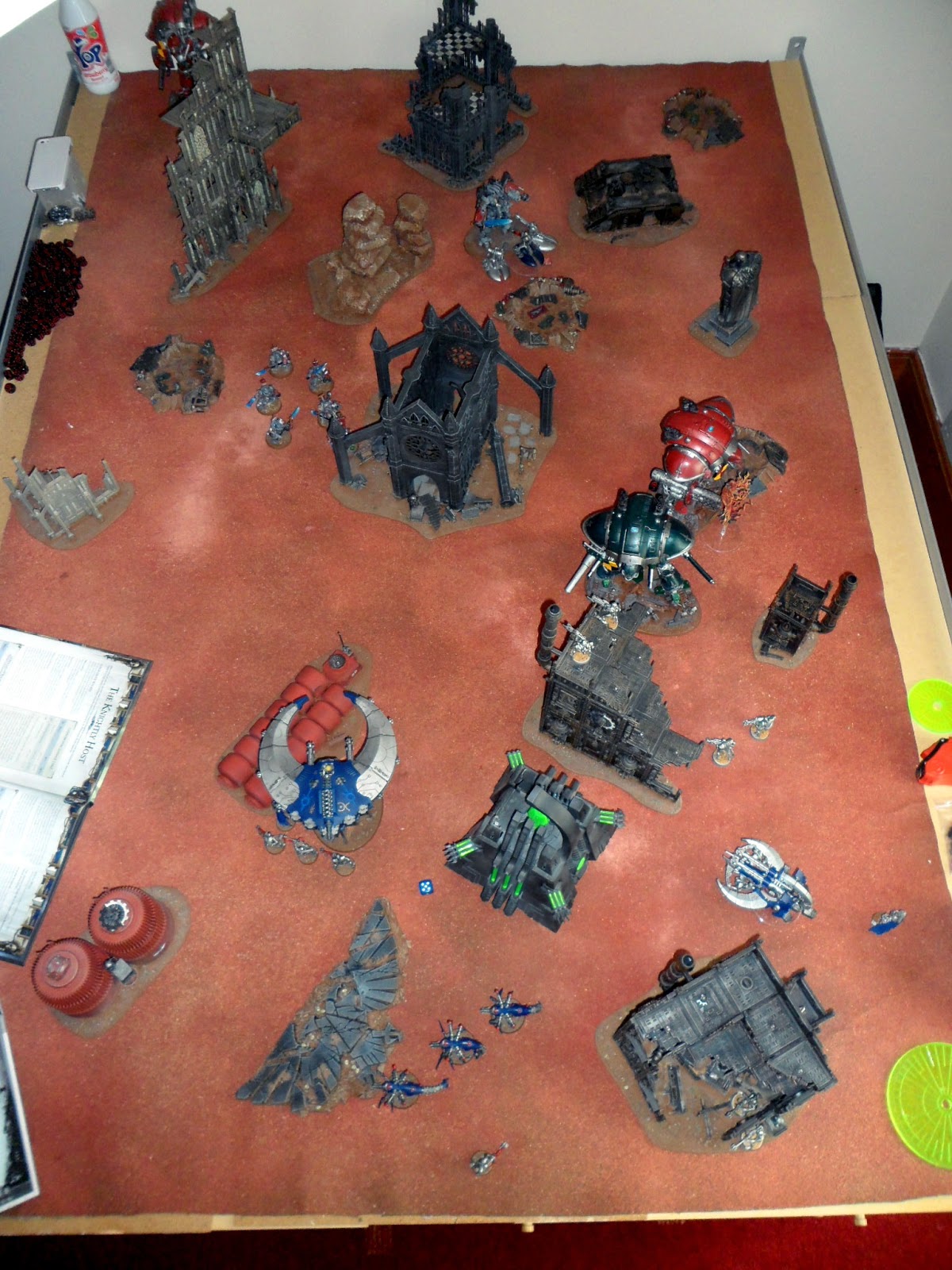 In combat, the C'Tan shard tied again in combat, striking the Knight 3 times but again failing to penetrate. The knight failed his attacks in return. The Senschal Knight killed the remaining Warrior, being in combat during the turn saved him from at least two Cryptek's attentions. The Destroyers and Destroyer Lord charged the Dreadknight but failed to damage, the Warscythe of the Destroyer Lord failing to penetrate twice. 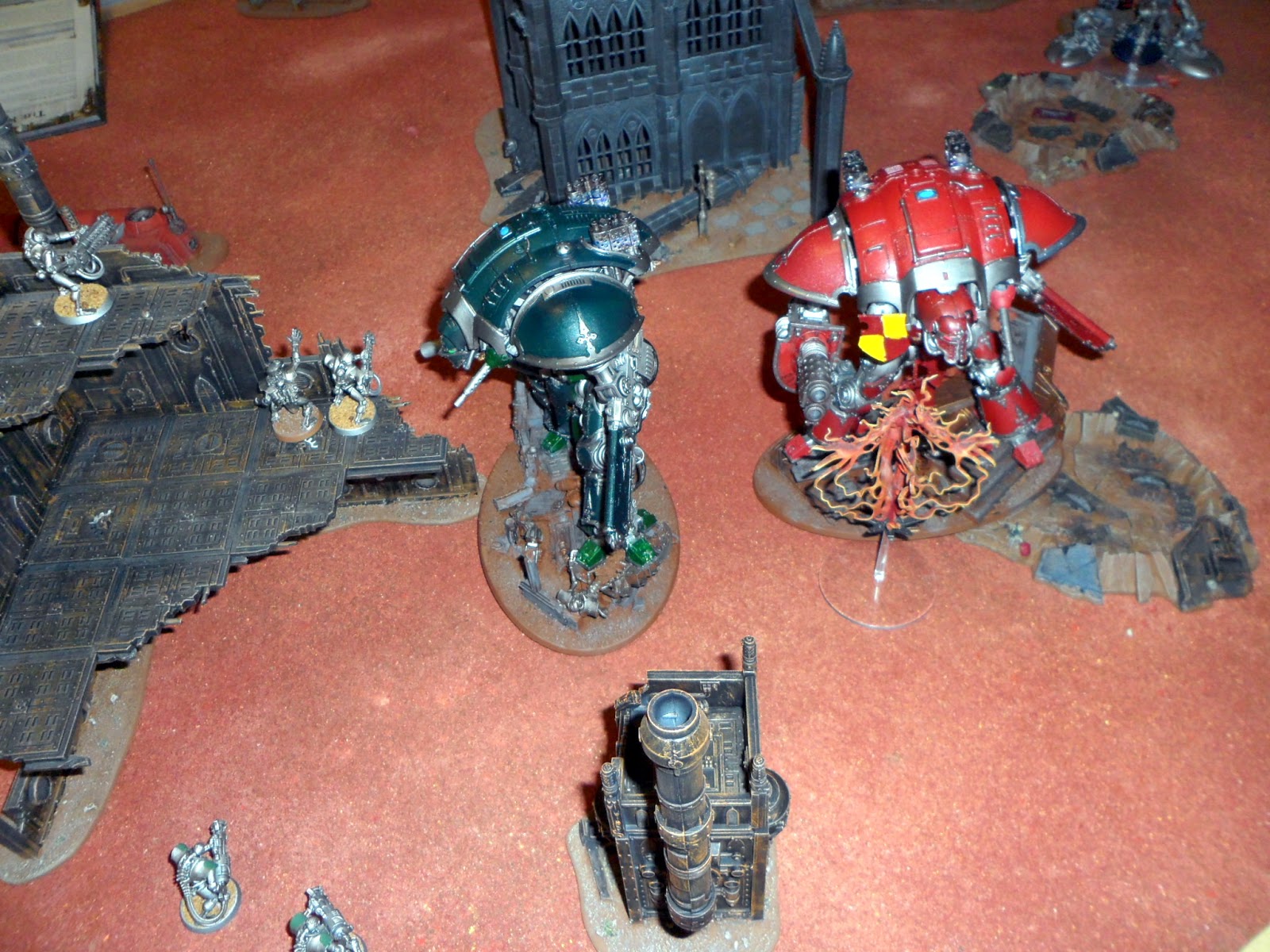 In turn 3 the Knight Errant and C'Tan Shard continued to trade blows, wounding the C'Tan twice but losing a hull point - now on 4. The Senschal Knight strips three hull points off the Monolith but it survives the stomp attack intact, rolling a one to miss the stomp! His shooting wasn't so good, failing to take revenge on the squad who killed the Knight Paladin. 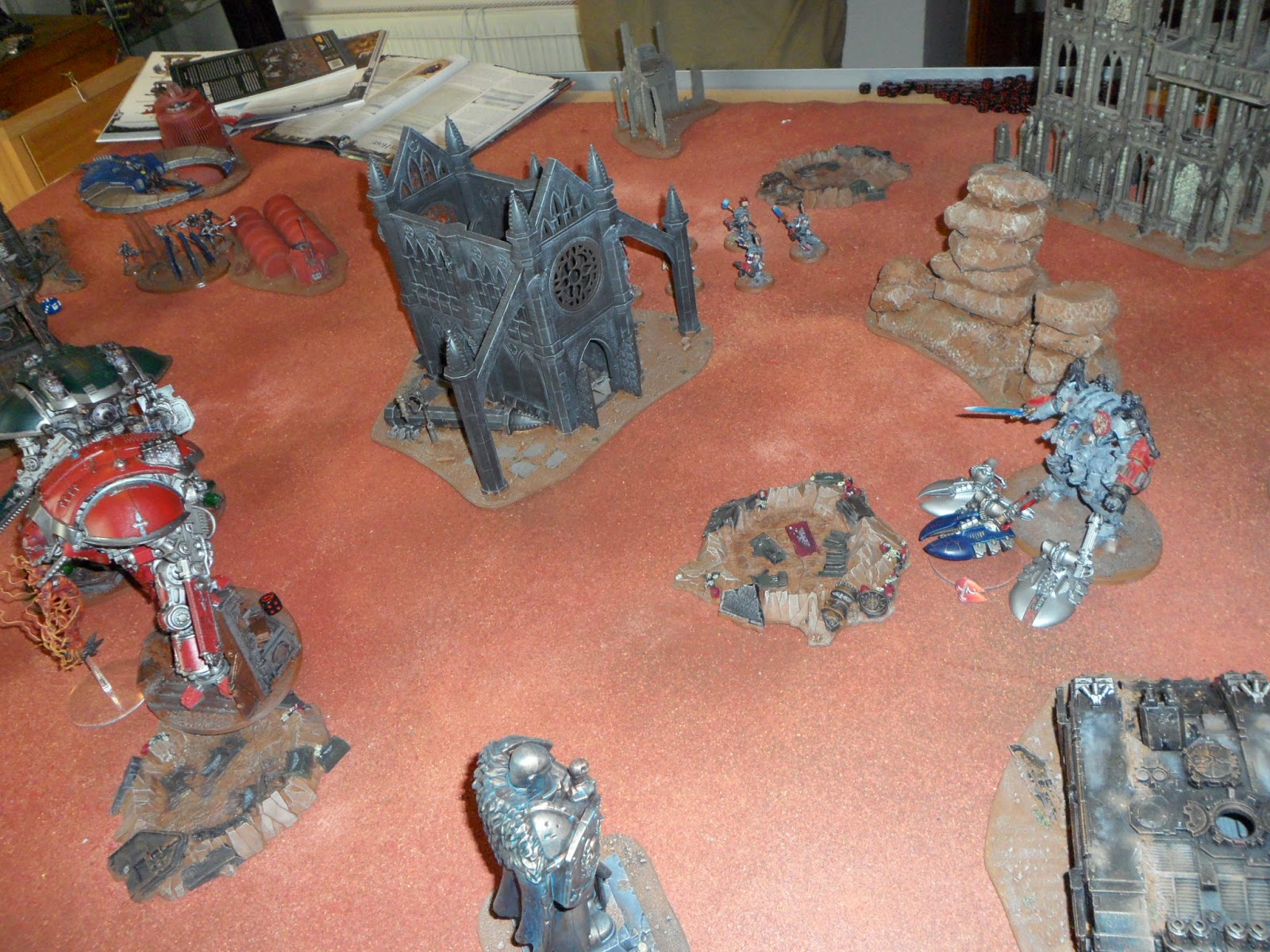 The Dreadknight in combat with 2 Destroyers and the Destroyer Lord killed the two Destroyers but the Lord failed to hit back with the Warscythe. 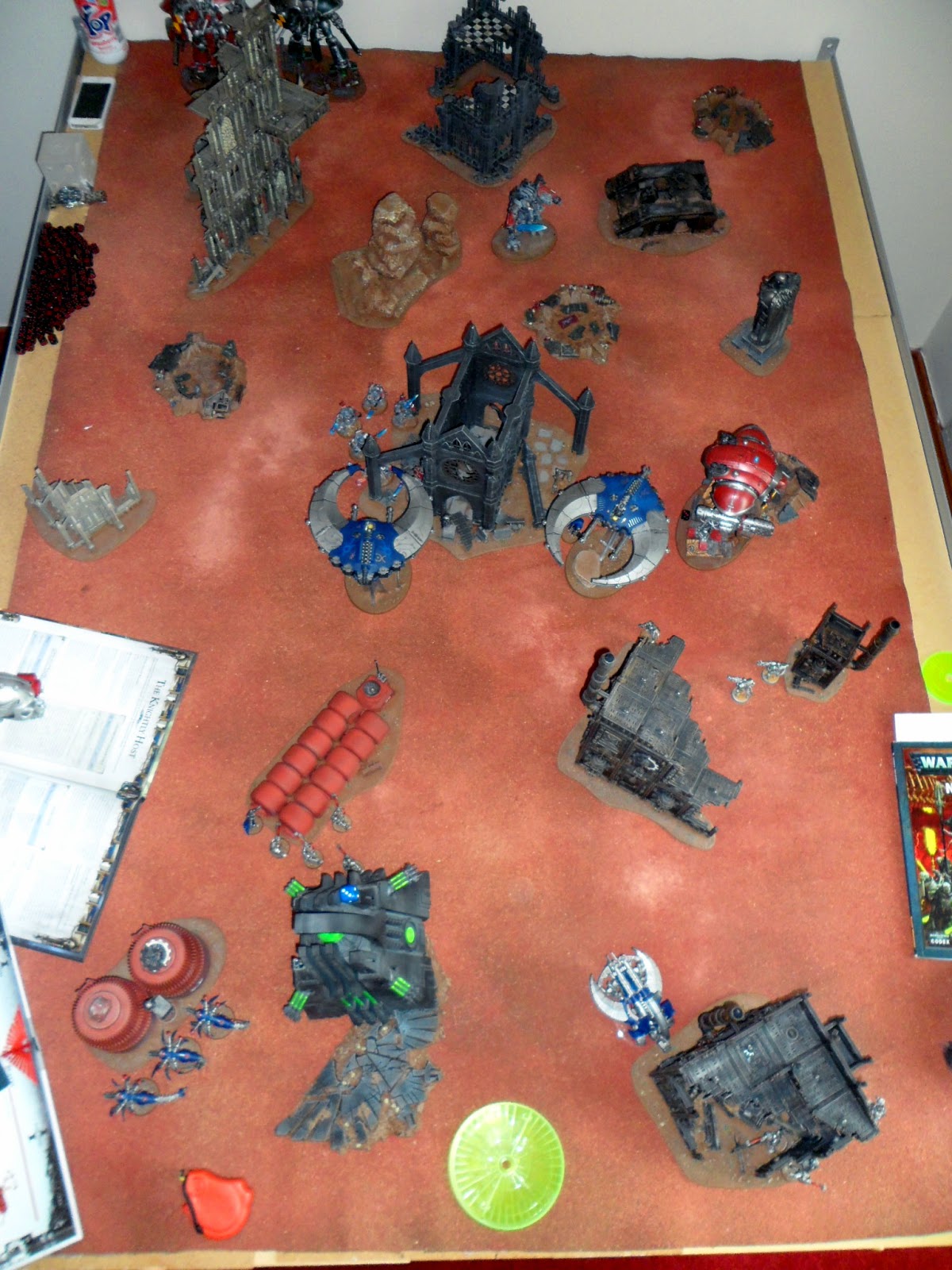 The Necron turn saw the destruction of the Senschal Knight through the combined Annihilation Barge, 2nd Night Scythe and some Cryptek firepower. The Destroyer Lord finally died and the C'Tan Shard died under the Knight Errant's feet, remaining on 3 hull points. Draigo advances toward the centre but a Warrior squad claim the objective. Elsewhere, the Assassin claims one and the Acanthrites another. The fourth objective is held by the Warriors in the rear of the Necron lines. 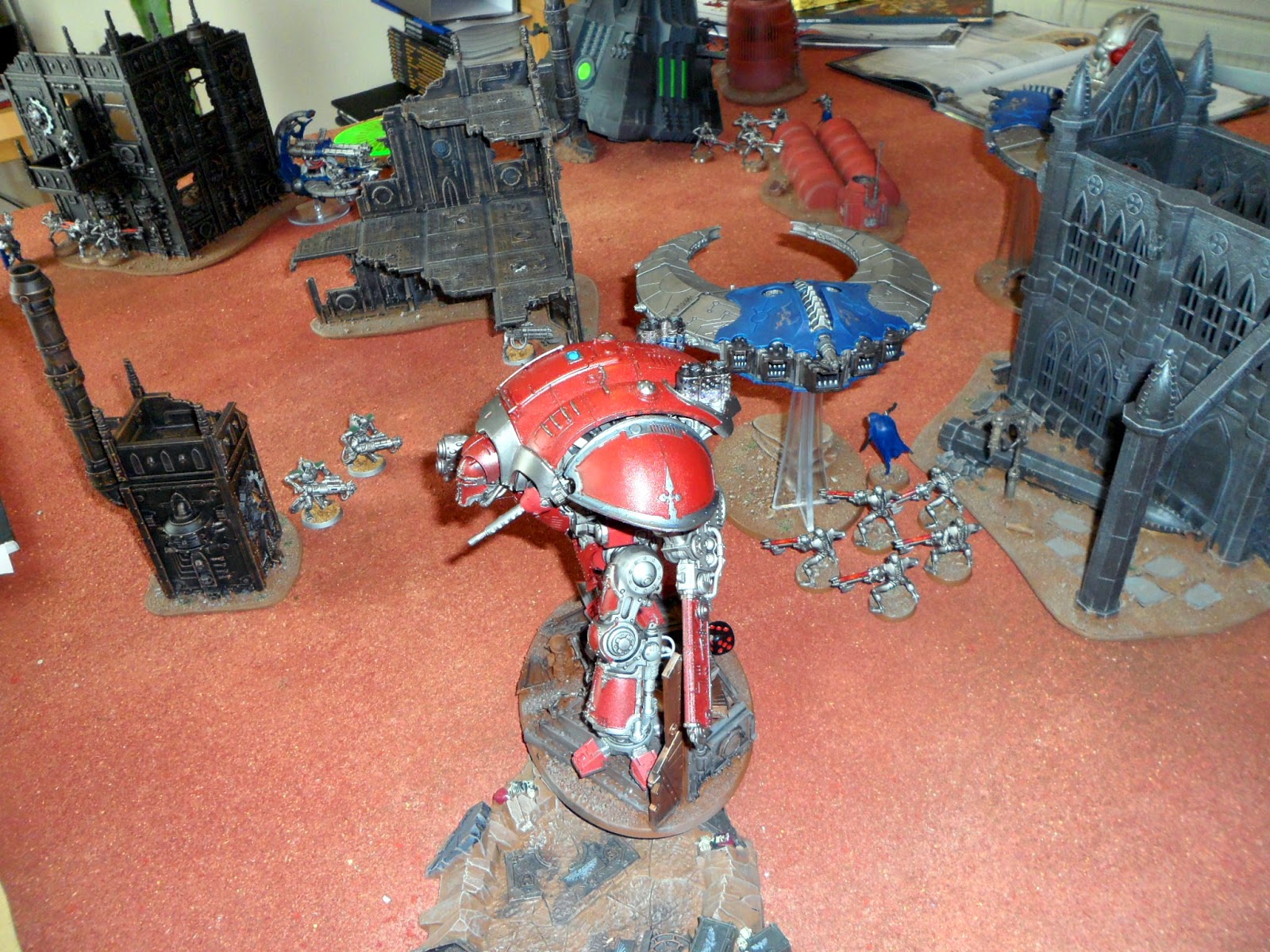 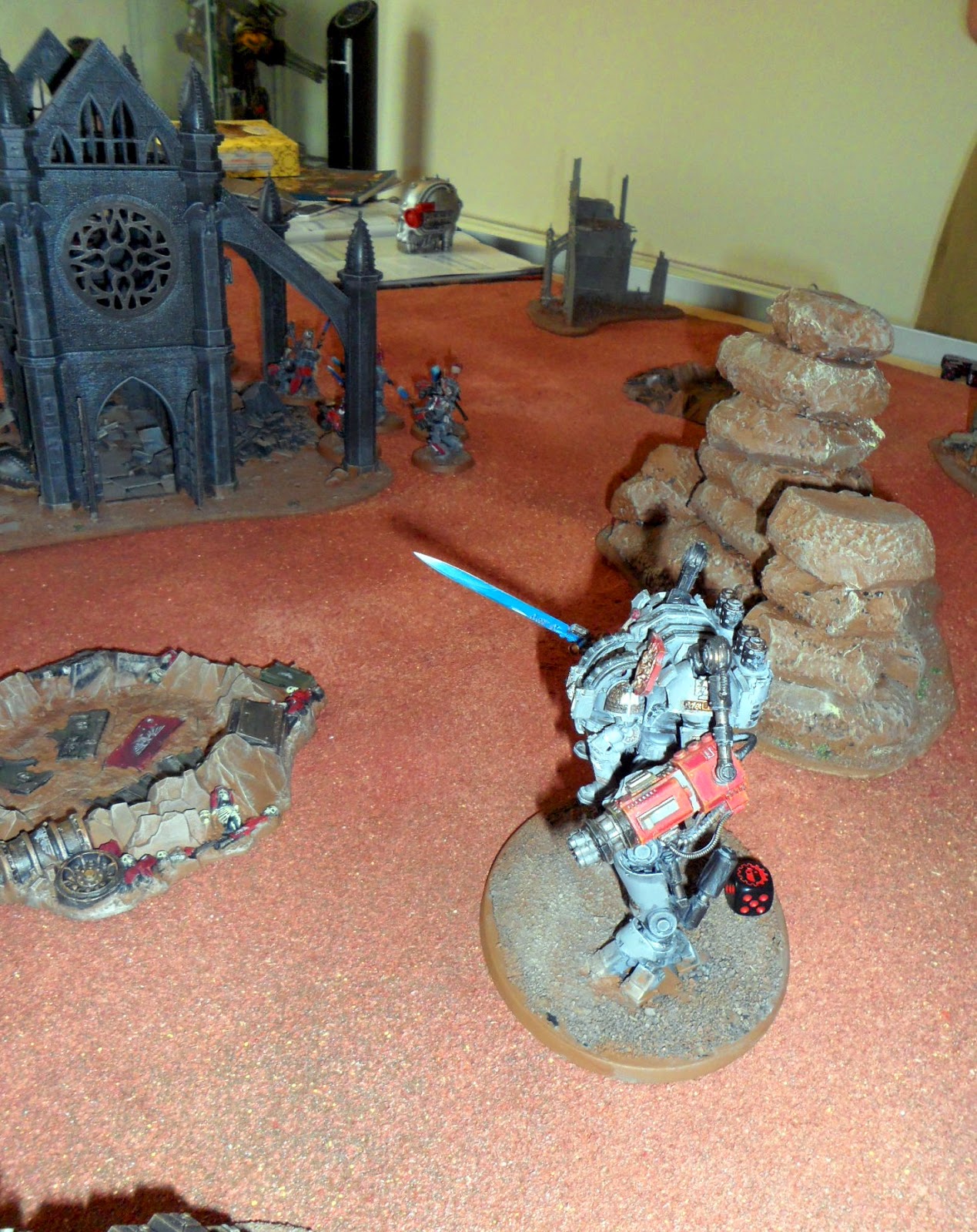 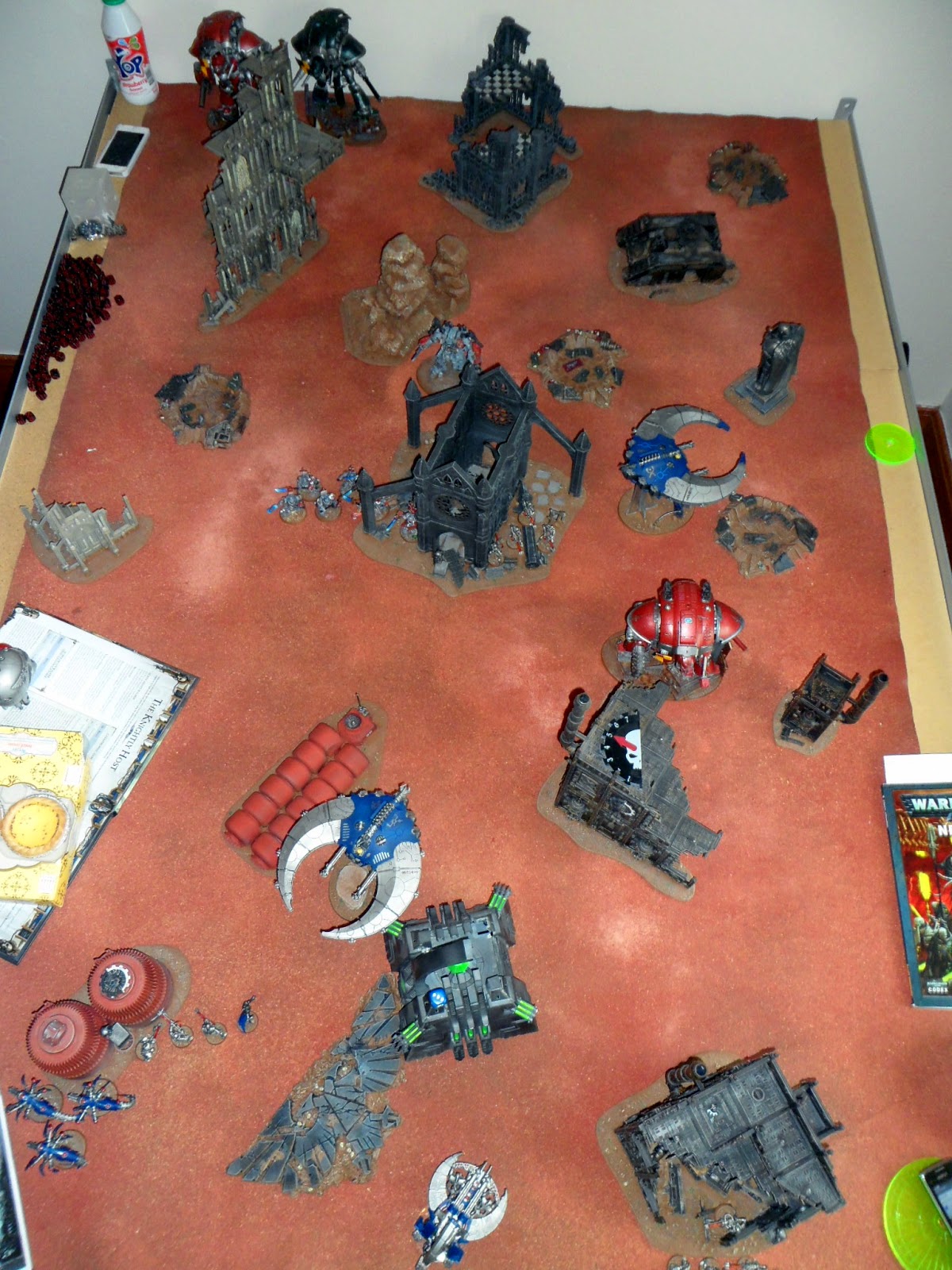 In turn 4, the remaining Knight takes down warriors and a Cryptek, the Paladins take down a lone warrior  near the power generators. The Dreadknight takes down some of the centre squad. The Knight charges two Immortals. Necron Turn 4 – Not much shooting except the Monolith Particle Whip and Gauss shots at the Paladins to no effect. The rest of the Necron force move around to claim 3 objectives. 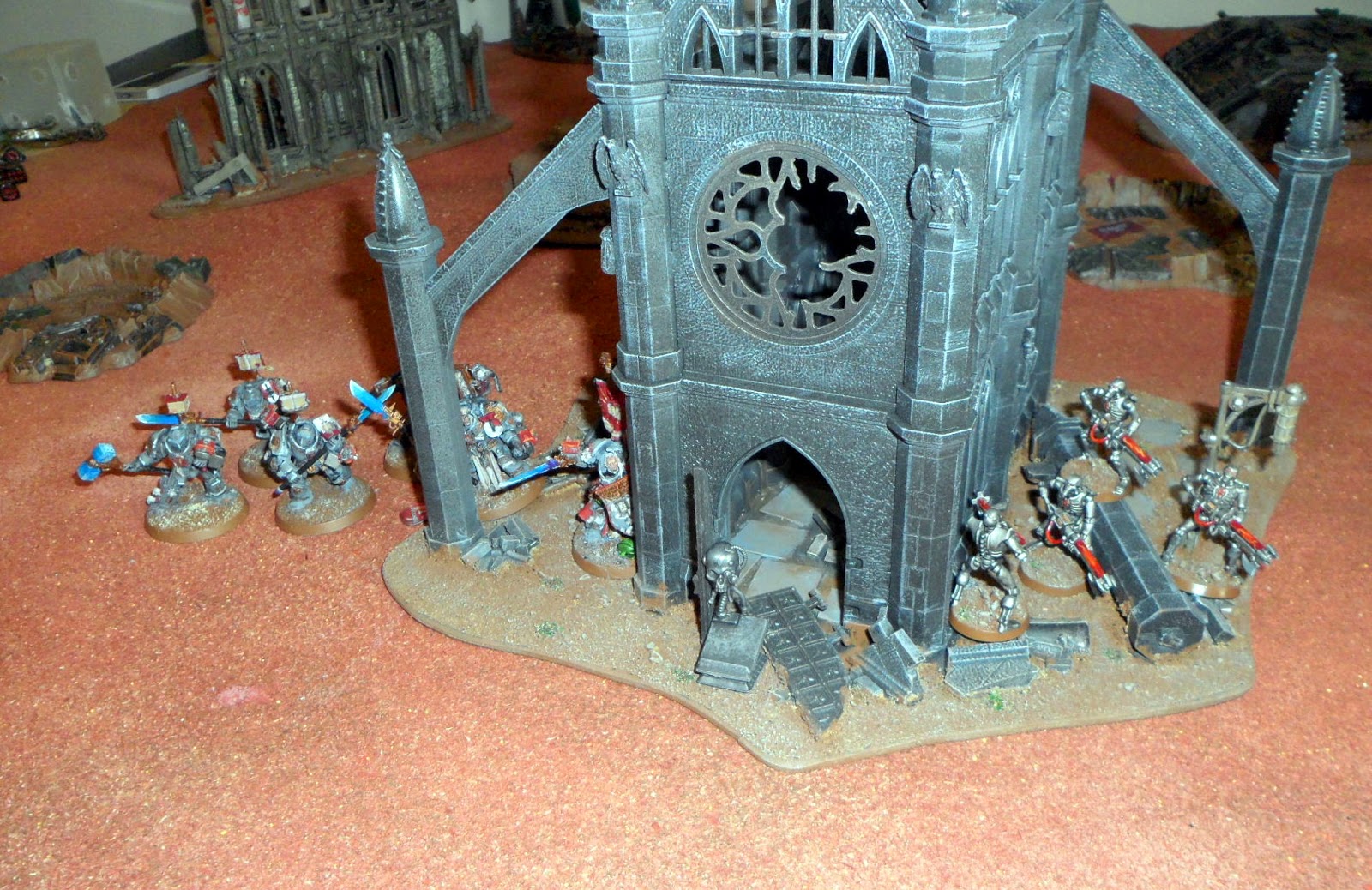 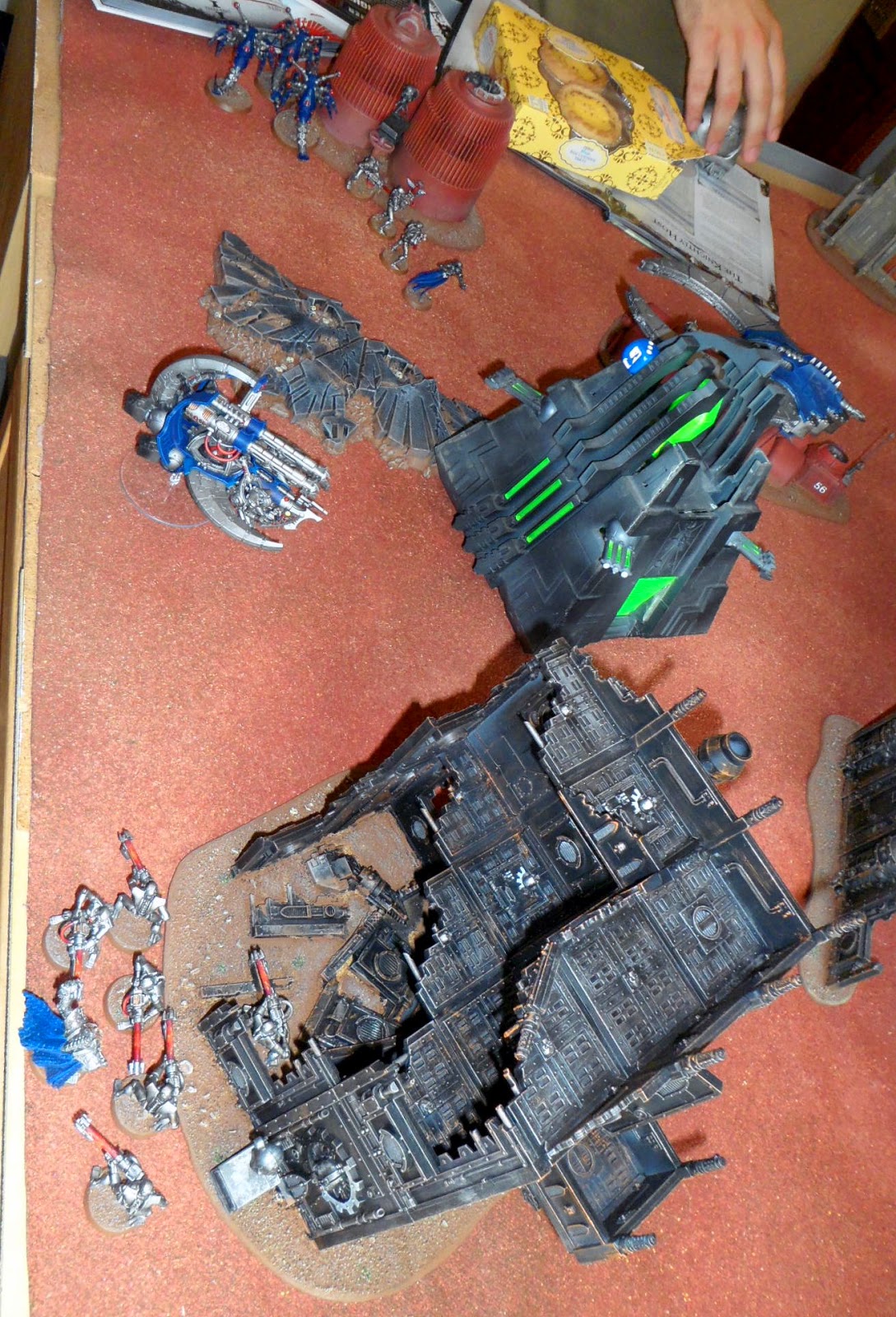 Knight Turn 5 – The remaining Knight smashes into the Monolith smashing it into the ground. And the Dreadknight wipe out the 4 man Warrior Squad on the centre objective!


Necron Turn 5 – The Necron Nightscythe in the centre Tesla Destructors’ the Paladins, taking out one Paladin. The Annihilation Barge and Voltaic Staff Cryptek strip the final Imperial Knight of its hull points and it is destroyed giving the Necrons the moral victory and all Imperial Knights are destroyed!

We roll for a Sixth Turn, however the dice Gods are not favoured and a 2 is rolled ending the game. Lord Halfpenny has Won with Draigo and the Knights with 2 Objectives, Big Guns never Tire (Monolith), and First Blood. Necrons have 2 Objectives and Slay the Warlord for the Senschal Knight! 4:3 to the Grey Knights and Imperial Knights. 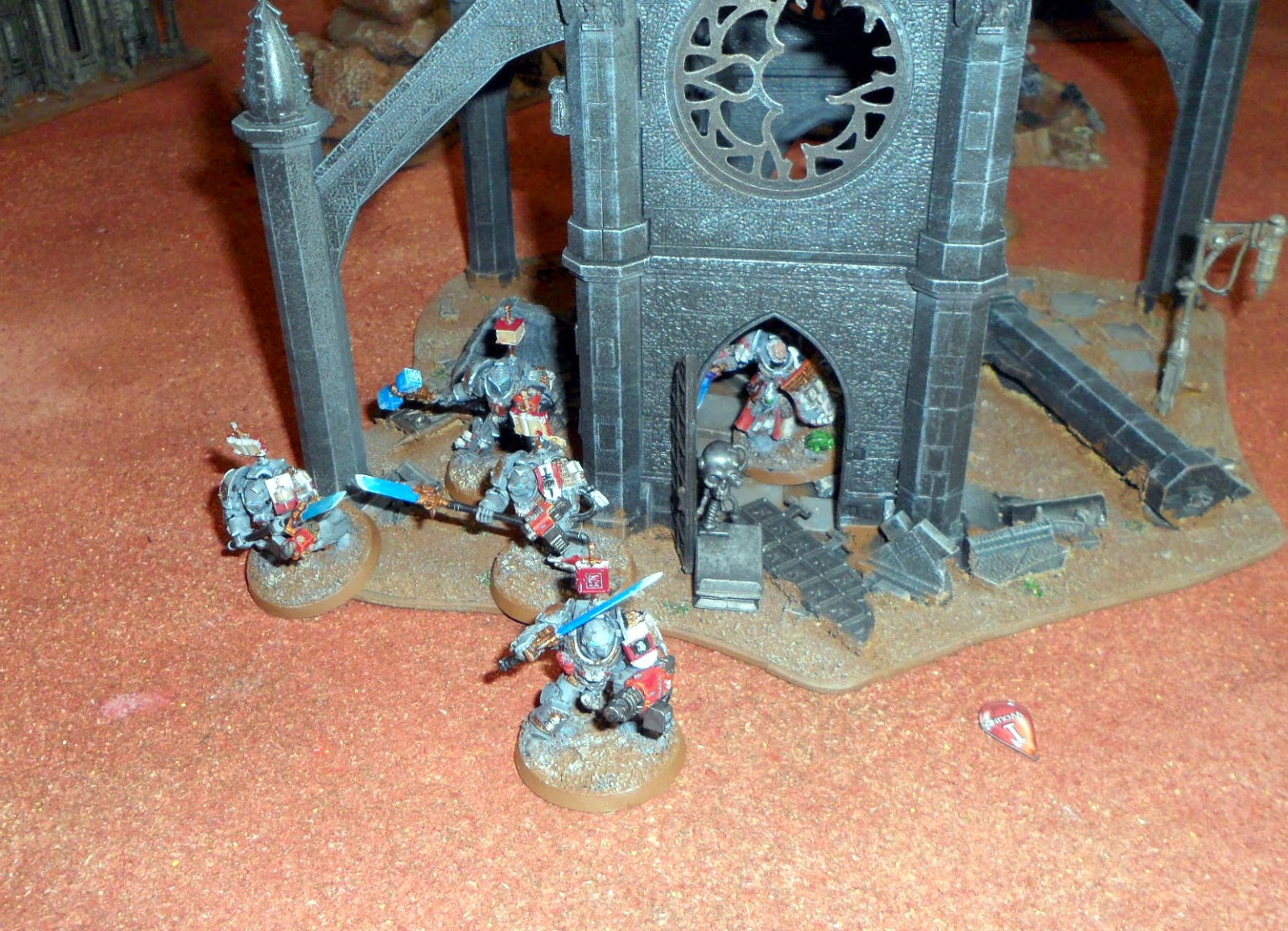 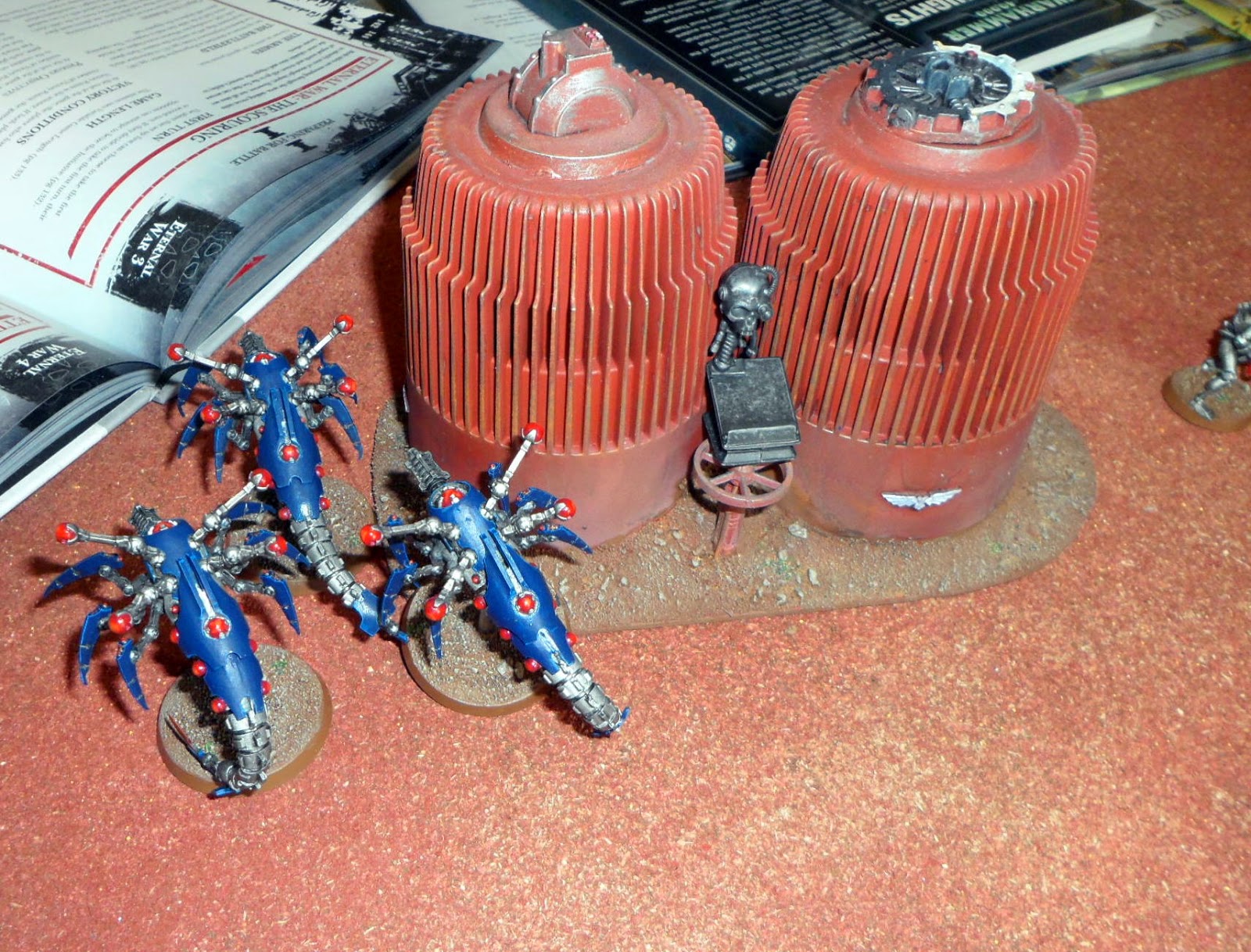 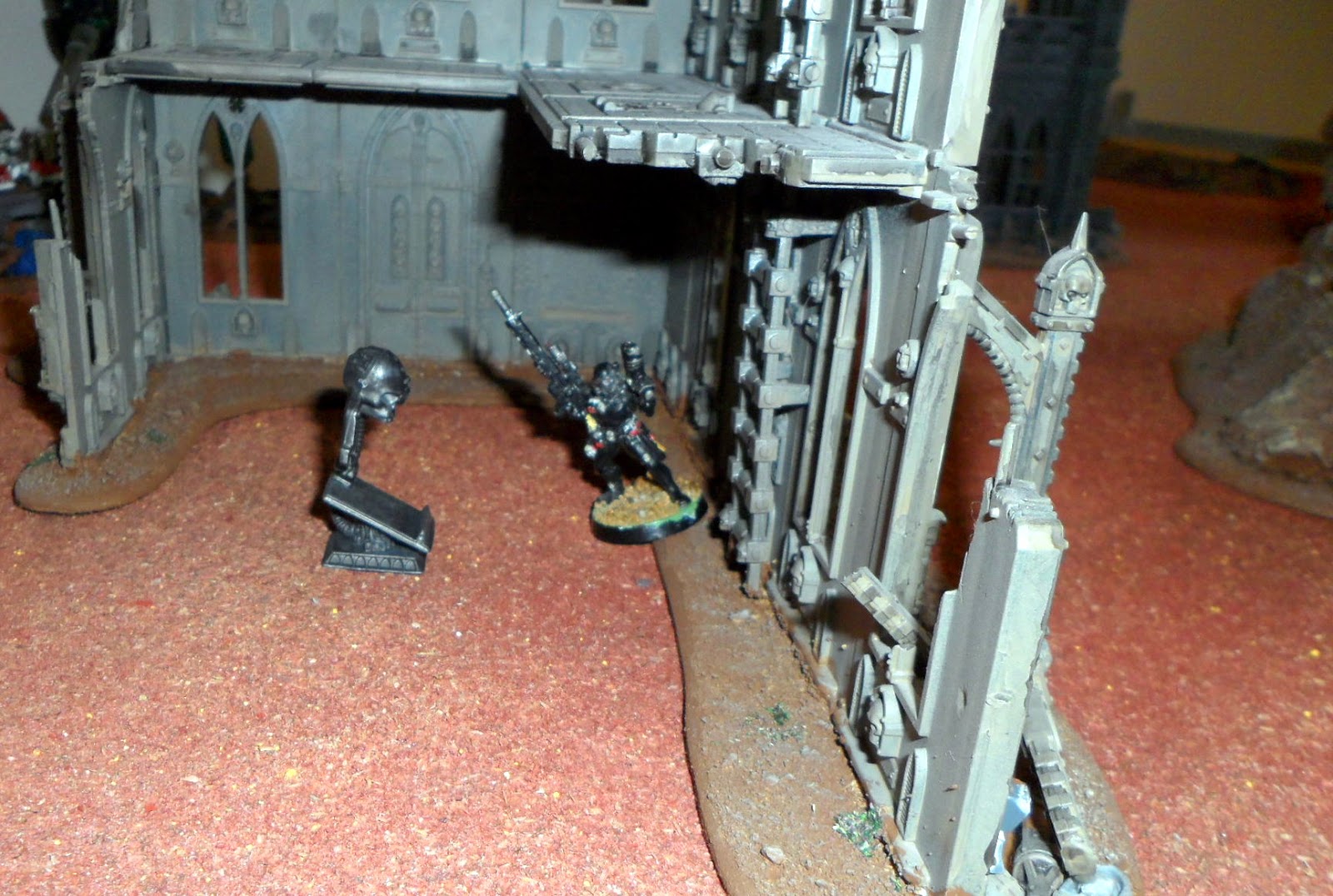 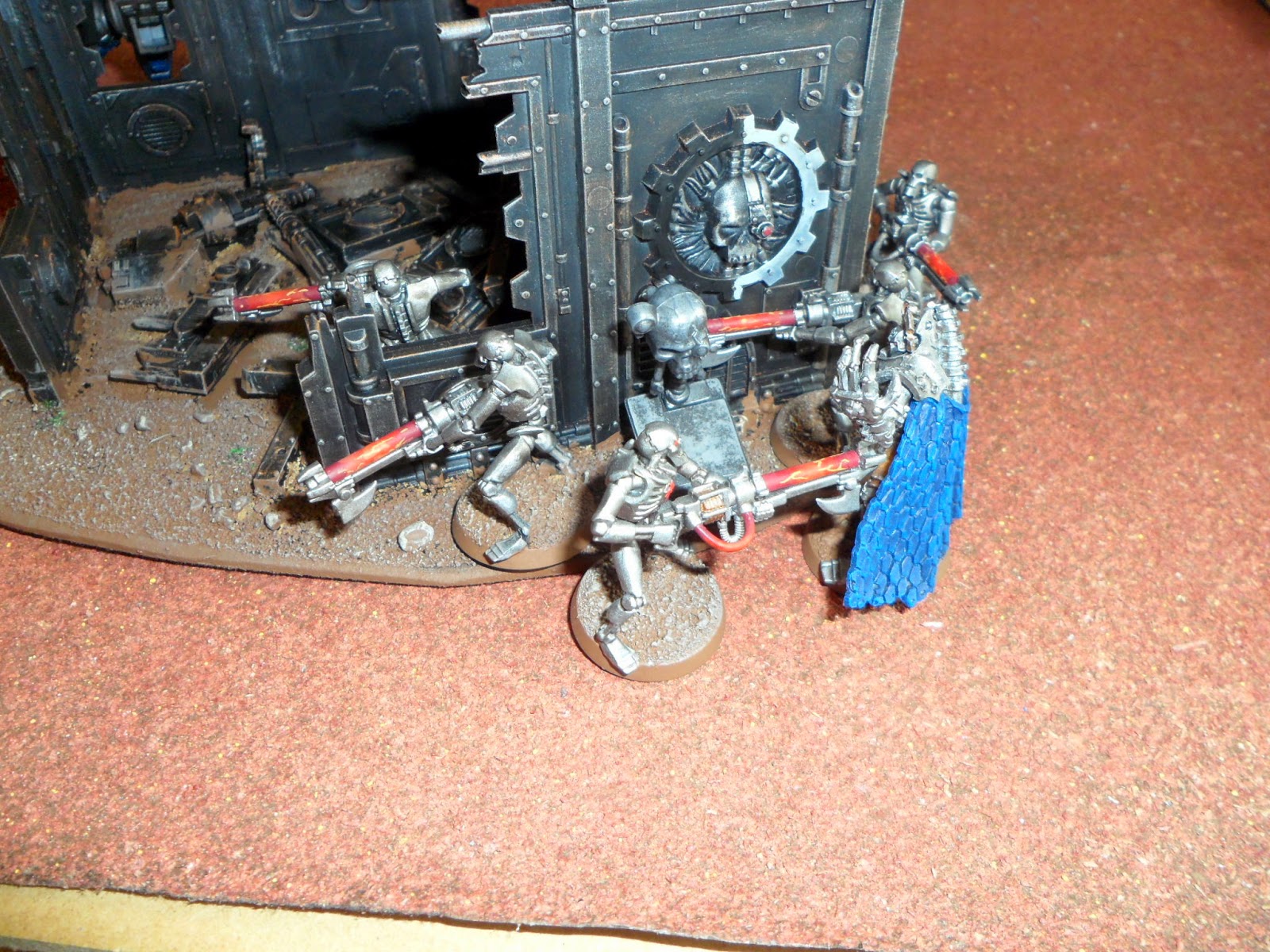 Siph – Well this was a close one. I was confident I could take on the Knights I knew Lord Halfpenny had at our previous encounter, but 3 appeared and my first volley with the Voltaic Staff’s was a damp squb. Imotekkh did nothing after the first turn with the ending of Nightfighting so was a waste of points. I need to paint up another Annihilation Barge (or 2) to give me the fire power I want, too many points are tied up in the Monolith – merely because I have one made – it wouldn’t be my first choice. A great and enjoyable game, especially when I achieved my personal aim of removing the Imperial Knights, all three of them! Draigo and his Paladins were a points sink and ineffective throughut, but also a hard nut to crack – saving 7 times in one turn, darn those Imperial Heroes!

L HP- A real good, and enjoyable battle- I'm finally seeing the Necron's as quite the force- with some interesting 'toys' that are a nightmare for vehicles. Turn 1 showed that it didn't matter how many shots you've got- if you keep rolling high numbers with the scatter dice you are going to miss- I think I must have missed about 5 battle cannon shots through the game. The tactic I went for was to charge the 3 knights in, and sweep up with the Grey Knights- the Nemesis Dreadknight was a monster and obliterated everything that it fired against. I've found playing with the knights really enjoyable- I'm not sure how I'd cope if it was the reverse..
Posted by Siph_Horridus