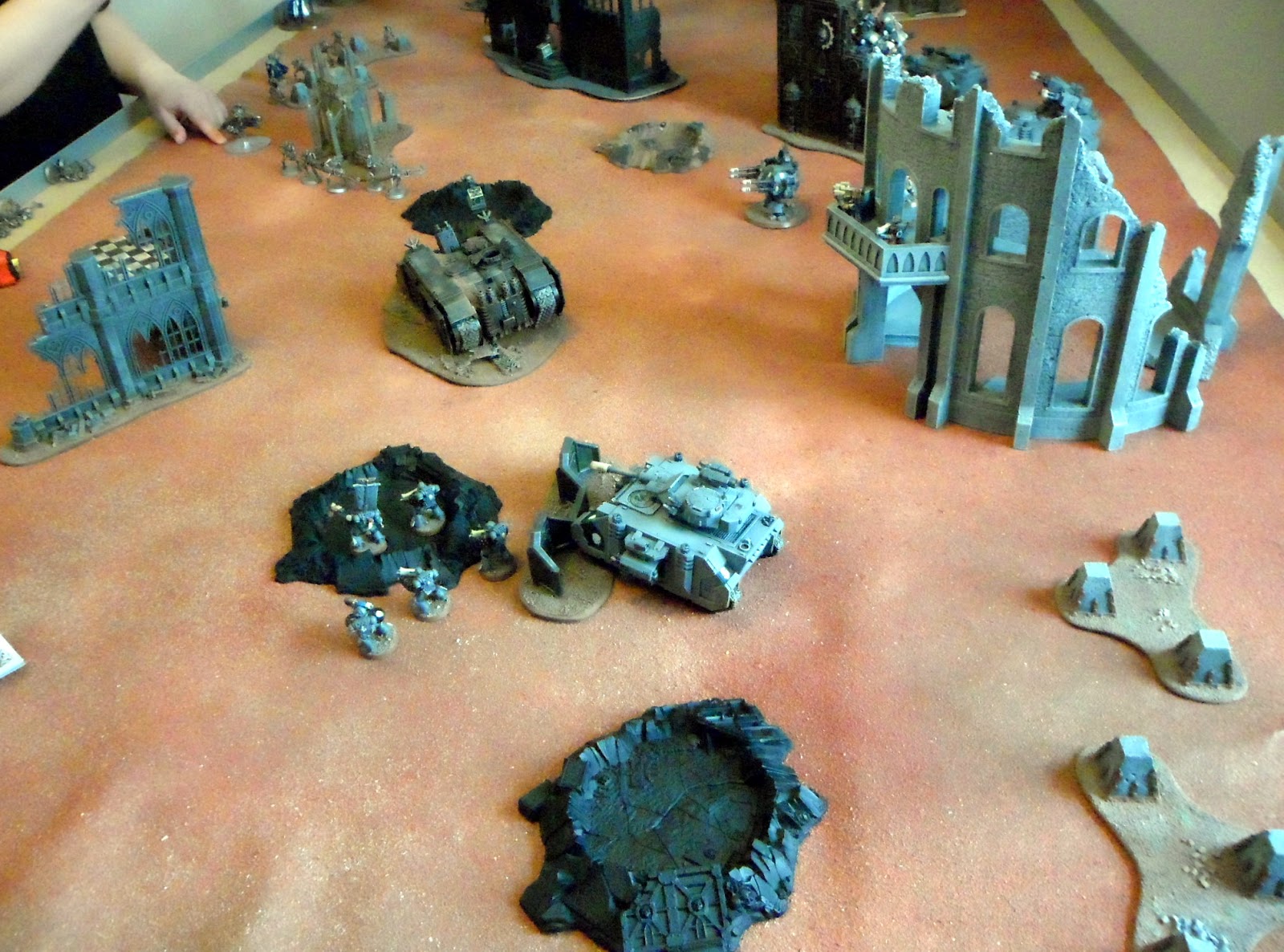 So my gorgeous GF and I had a re-match of the first game, this time I was playing Relictors and it was 3 Objectives, diagonal deployment, 1000pts each with the Relictors gaining first turn and the Necrons failing to seize the initiative. The Necrons had an objective at the door of the Shrine of the Aquila, the Relictors one in the Round Tower ocupied by the Scouts w/ Bolters and the final objective lay in the centre in a Quake Cannon crater. 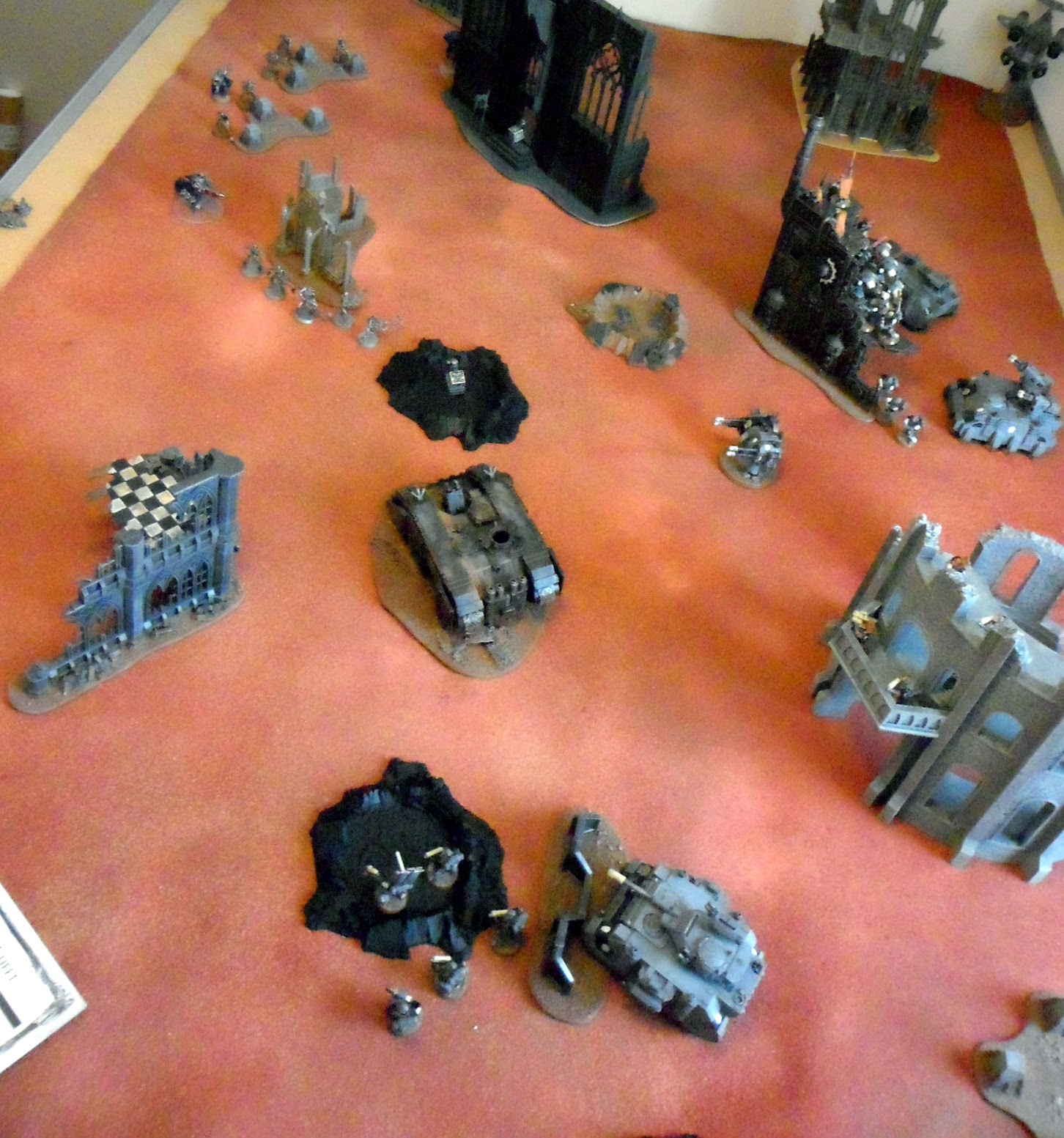 Relictor Turn 1
The Relictors started the offensive striking a Necron Warrior Squad with the dakka Pred, Scout Missile Launcher, Scout Heavy Bolter and Rifleman Dread determined to get First Blood and wiping them out. A Canoptek Scarab base was also destroyed and another wounded. 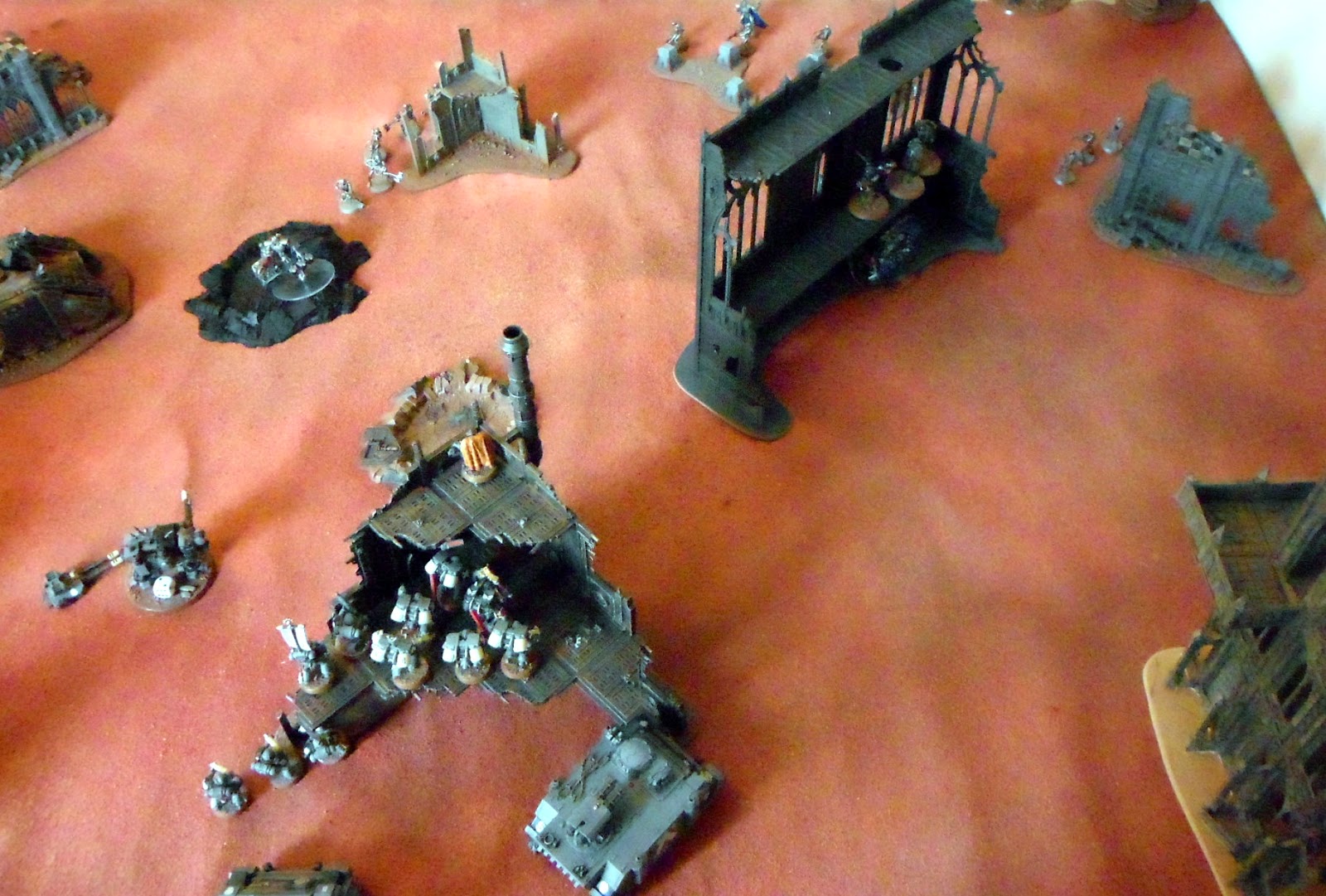 Necron Turn 1
Imotekh opened with his Lightning Storm striking the Dreadnought 6 times and the Scout Sniper Sqd 5 times and the Stalker once. The Dread lost one of his weapon arms and 2HPs and 3 Scouts died. The Stalker survived. Imotekh's Warrior Squad advanced and fired at the same scouts, but the building saved them from harm. The Spyder advanced and Particle Beamer shot hit two Scouts - slaying one leaving the Scout Sniper Sqd to one Scout with the Heavy Bolter - but he held his nerve. The rest of the Necron Legion slowly closed the distance. 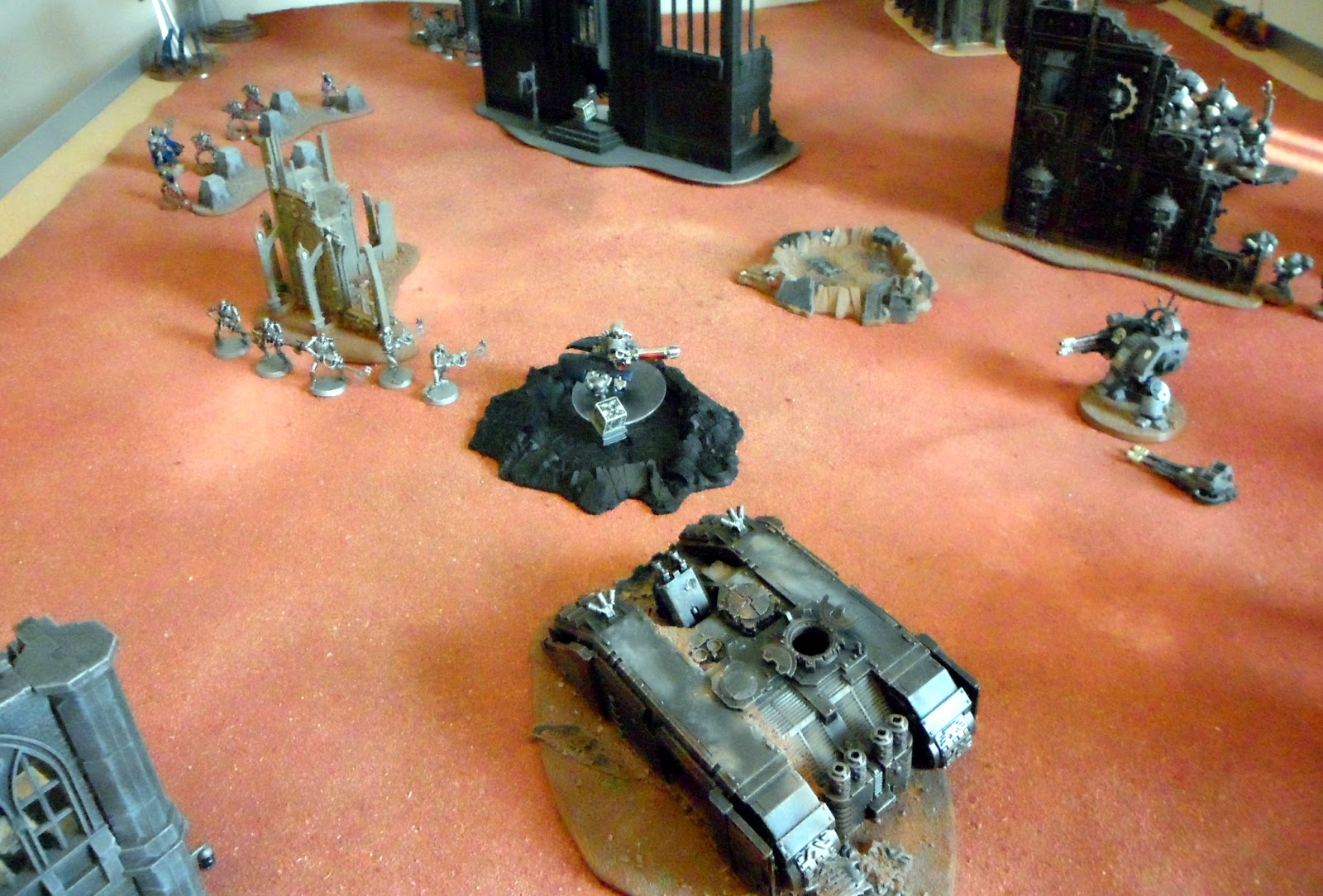 Relictor Turn 2
Dakka Pred open fired on the Scarab Bases wounding another base, the Plasma Tac Squad fired at the Necron Sqd advancing into the middle objective and took down one warrior. The Scout Missile Launcher, Heavy Bolter and Grav Tac Squad concentrated fire on the Destroyer Lord but only took one wound. The Stormtalon arrived from reserve and stripped two wounds from the Canoptek Spyder. Assault Cannon Razorback fired at the Acanthrites but failed to wound the mosquito-like constructs. The Dreadnought sensing victory in the middle used his higher initiative to strike the Destroyer Lord but fluffed his attacks, being slain by the Lord's Warscythe! 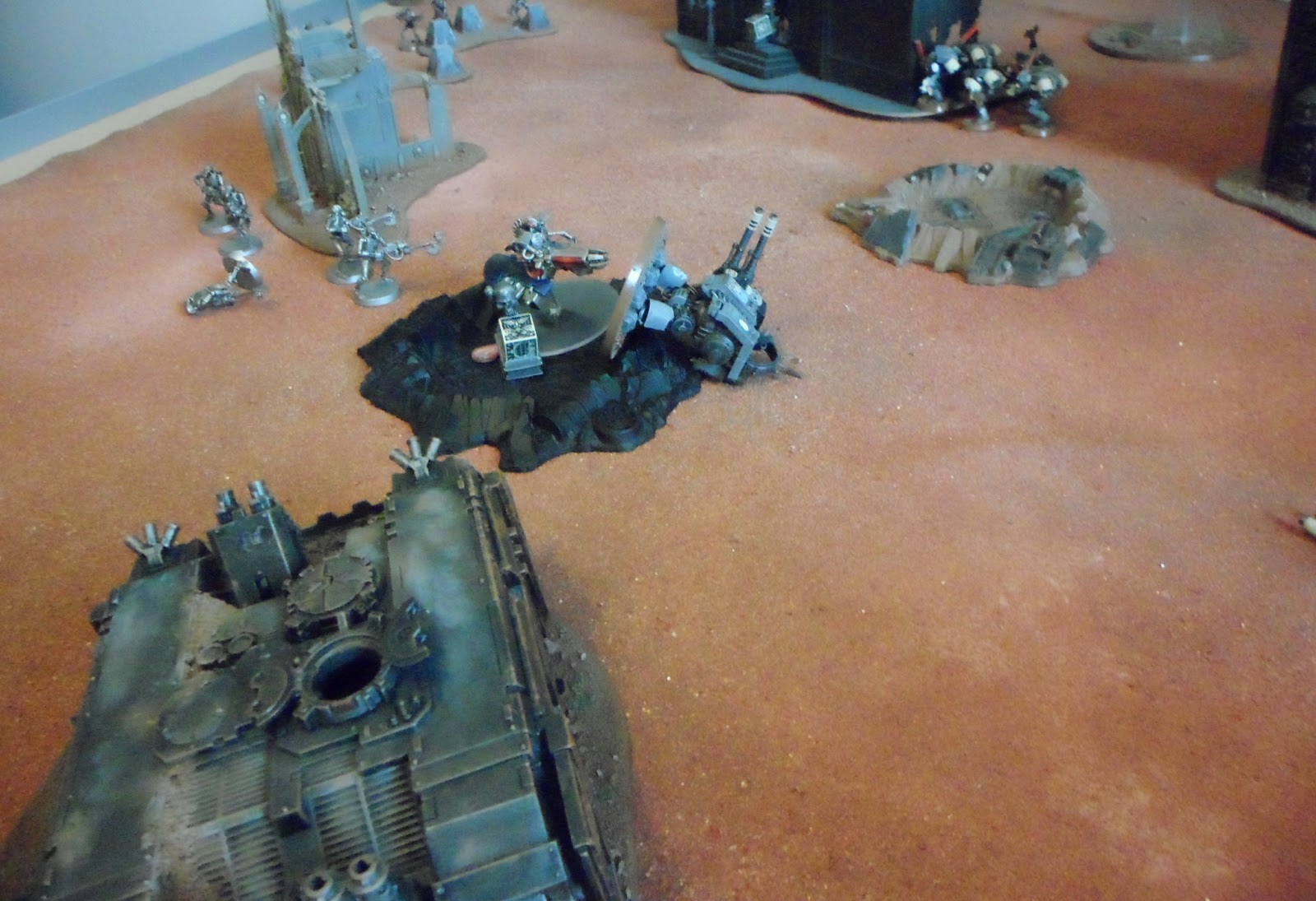 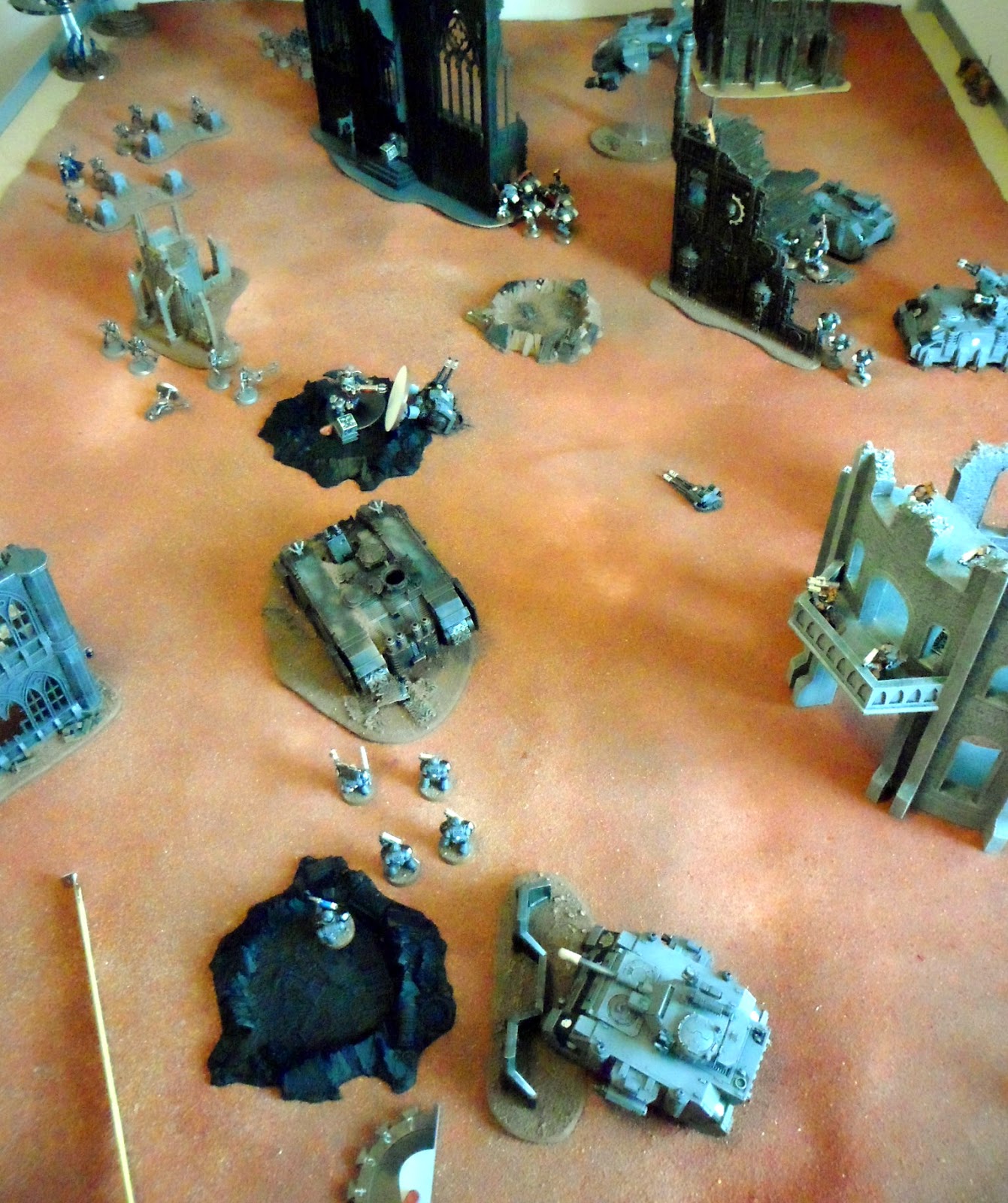 Necron Turn 2
The Warriors in the middle advanced toward the objective firing at the Grav Tac Sqd in the Mechanicum building but failed to find their targets, the Acanthrites and Canoptek Spyder fired into the Assault Squad and Chaplain before charging - wiping the squad out with Melta and Particle Beams before finishing off the Chaplain in CC with rending voidblade stings. The Chaplain could only dent the high toughness constructs - giving Necrons Slay the Warlord. A Night Scythe came in from reserve and wiped out the remaining Heavy Bolter Scout with massed Tesla Destructor fire scoring 5 hits (6's give two additional hits!) 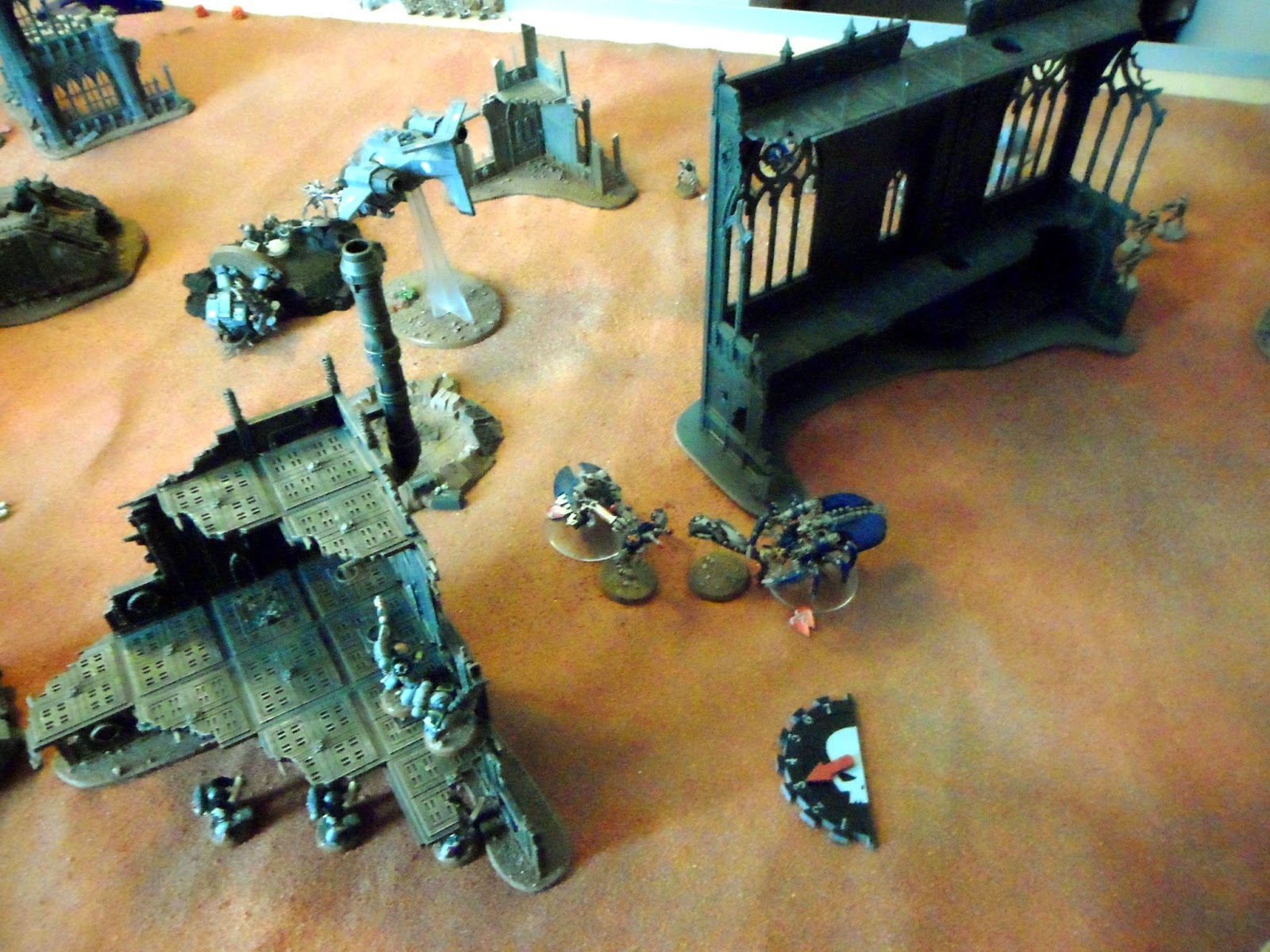 Relictor Turn 3
The Stormtalon, Razorback, Plasma Tac Sqd and Missile Scouts all targetted the Acanthrites taking one out and wounding another, but their high toughness, multiple wounds and 3+ save meant they were very much still a threat. The Stalker penetrated the Night Scythe twice and glanced once taking the flyer out. 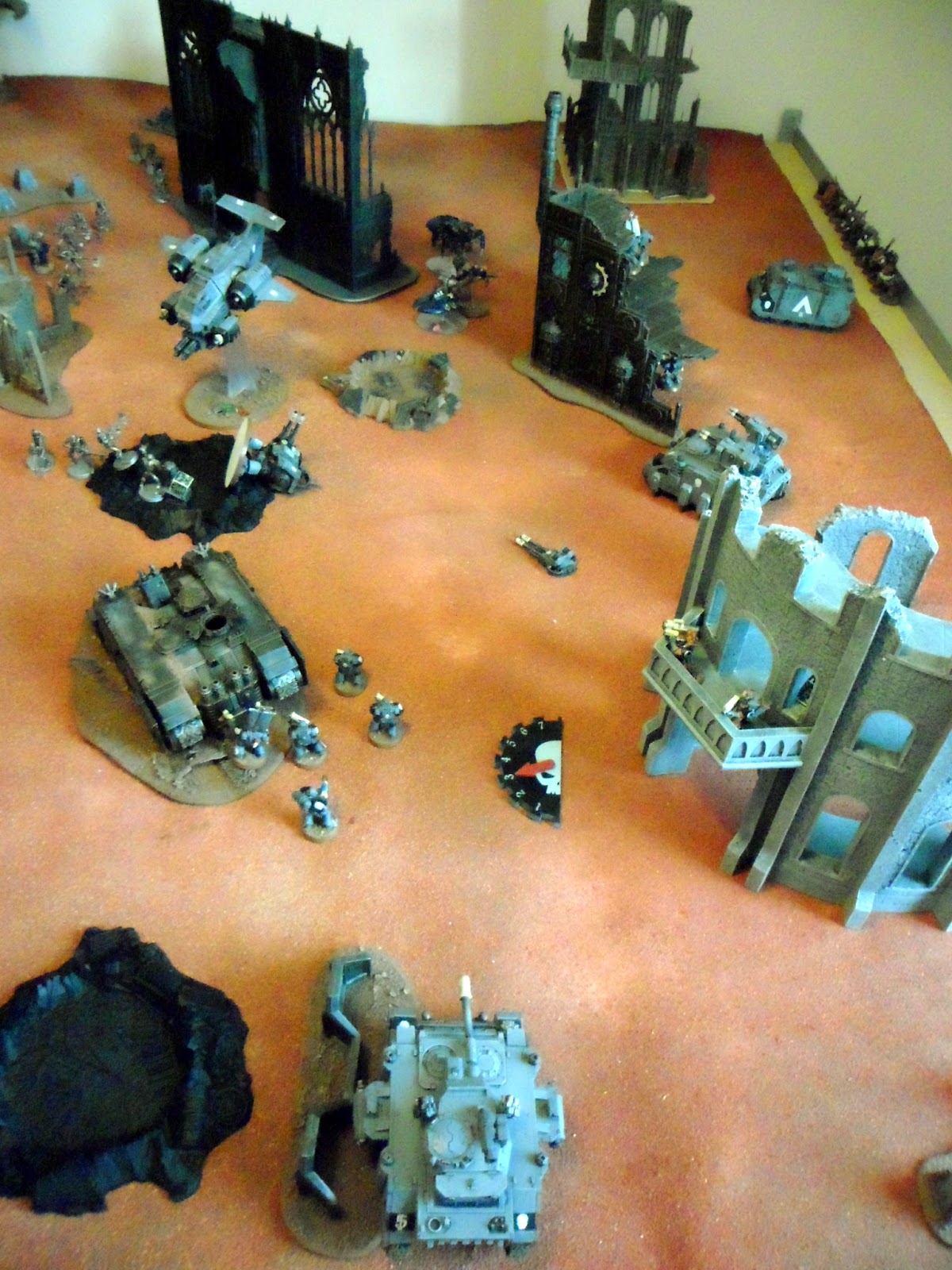 Necron Turn 3
Imotekh's lightning storm struck the Scout Sqd holding the objective 6 times killing two, and the Razorback once but failed to glance. The Warriors in the centre fire at the Scouts also but fail to do any damage. The 2nd Night Scythe zooms on the board and Tesla Destructs the Stalker stripping 2 HP's and destroying one of the Icarus Stormcannon arrays halving its firepower shaking it. Both Warrior Sqds with Imotekh fire massed Gauss Flayers at the Stormtalon striking twice but failing to glance. 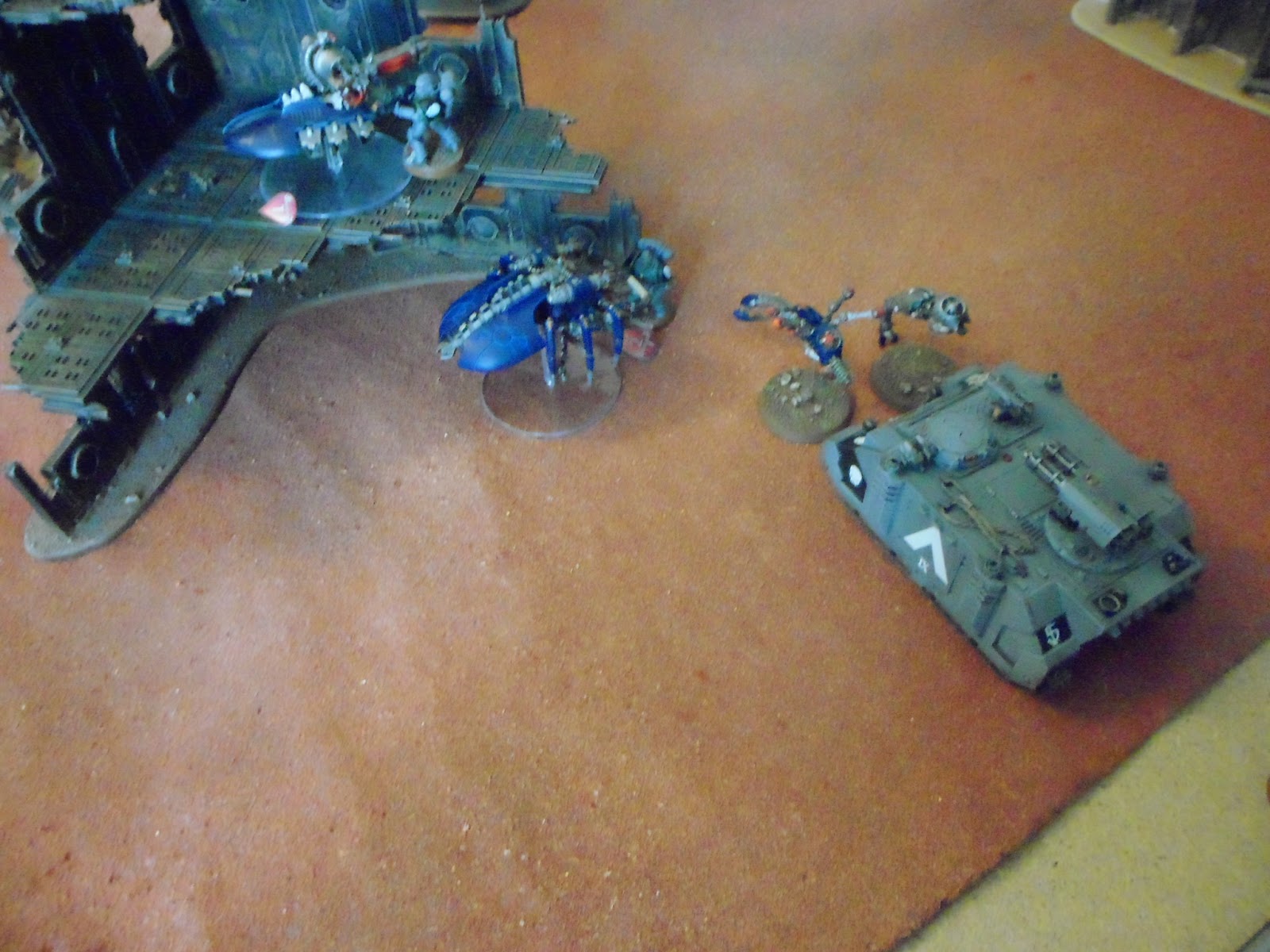 The Acanthrites at point blank range fire their Melta Lances at the Razorback but both miss, and the Canoptek Spyder  and Destroyer Lord charge the Grav Squad killing 3 but remain in combat.

Relictors Turn 4
The Plasma Sqd over by the ruined Landraider fire at the Scarabs approaching the Pred, killing one base and leaving a single base on two wounds. The Dakka Pred and Assault cannon Razorback finishes off another Acanthrite leaving one on one wound. The Scouts Missile the centre objective Warriors killing one Warrior. The Stormtalon weaves through the air in a dogfight with the Night Scythe scoring 3 rear armour hits but failed to glance. In CC the remaining Grav Tac Sqd fail to damage the Lord and Spyder and are both ripped asunder. 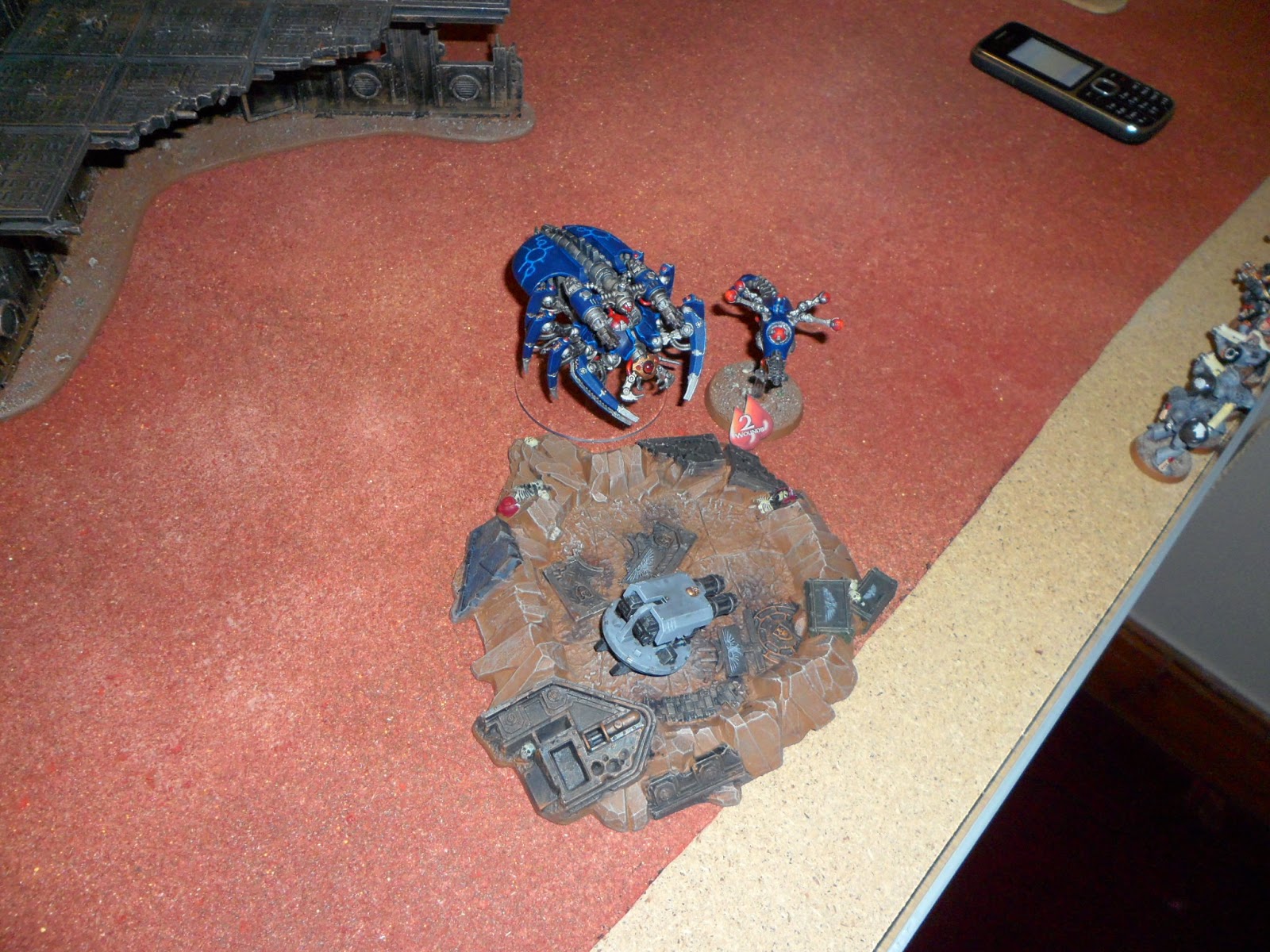 Necron Turn 4
The Warrior Squad in the centre maintain their hold on the objective whilst the Scarabs advance on the Predator stripping its AV values by 4 each side, the Destroyer Lord moved towards the Scouts and the marine objective whist the Acanthrite and Canoptek Spyder assault the Razorback destroying it in a fireball that takes the final wound from the Spyder. The Night Scythe rips the Stalker apart with Tesla Destructors. 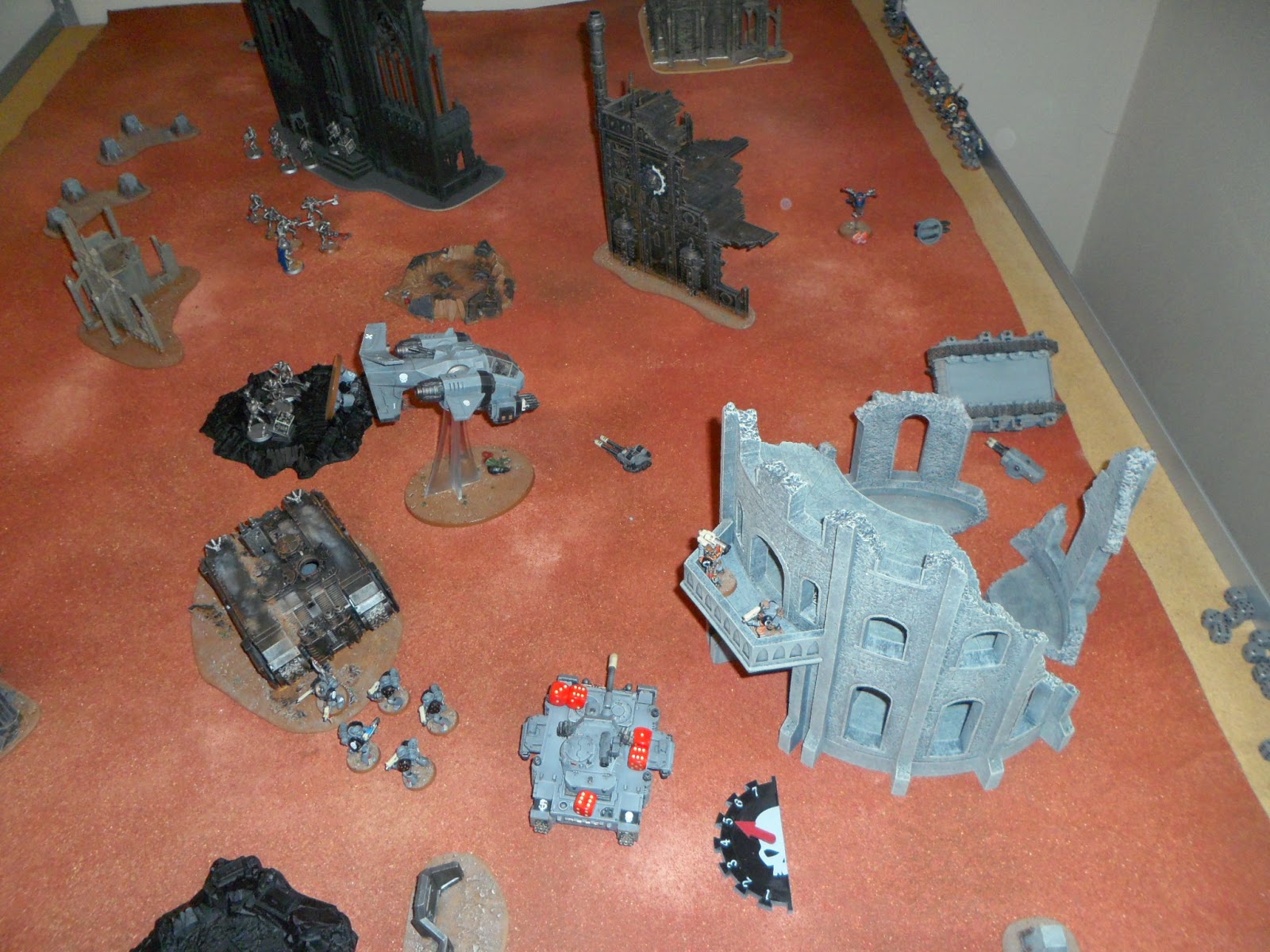 Relictors Turn 5
All was to play for, if the Warriors in the centre could be dislodged it could be a draw. The Predator forgetting this priority opened up on the Destroyer Lord for an easy kill and toprevent him assaulting the Scouts on the objective but he made all his saves! Determined to get a kill and safeguarding the Scouts, the Plasma Tac Sqd fire at the Destroyer Lord finally killing him with Plasma fire. The Stormtalon opens up on the Night Scythe stripping it of its remaining HP's and it crashes into the desert floor.

Necron Turn 5
The Scarabs strip the AV values on the Pred b another 2 leaving the Pred vunerable but operational, the Imotekh Warriors and Acanthrite close the Scouts to try to kill them but only taking one scout leaving two scouts standing firm. 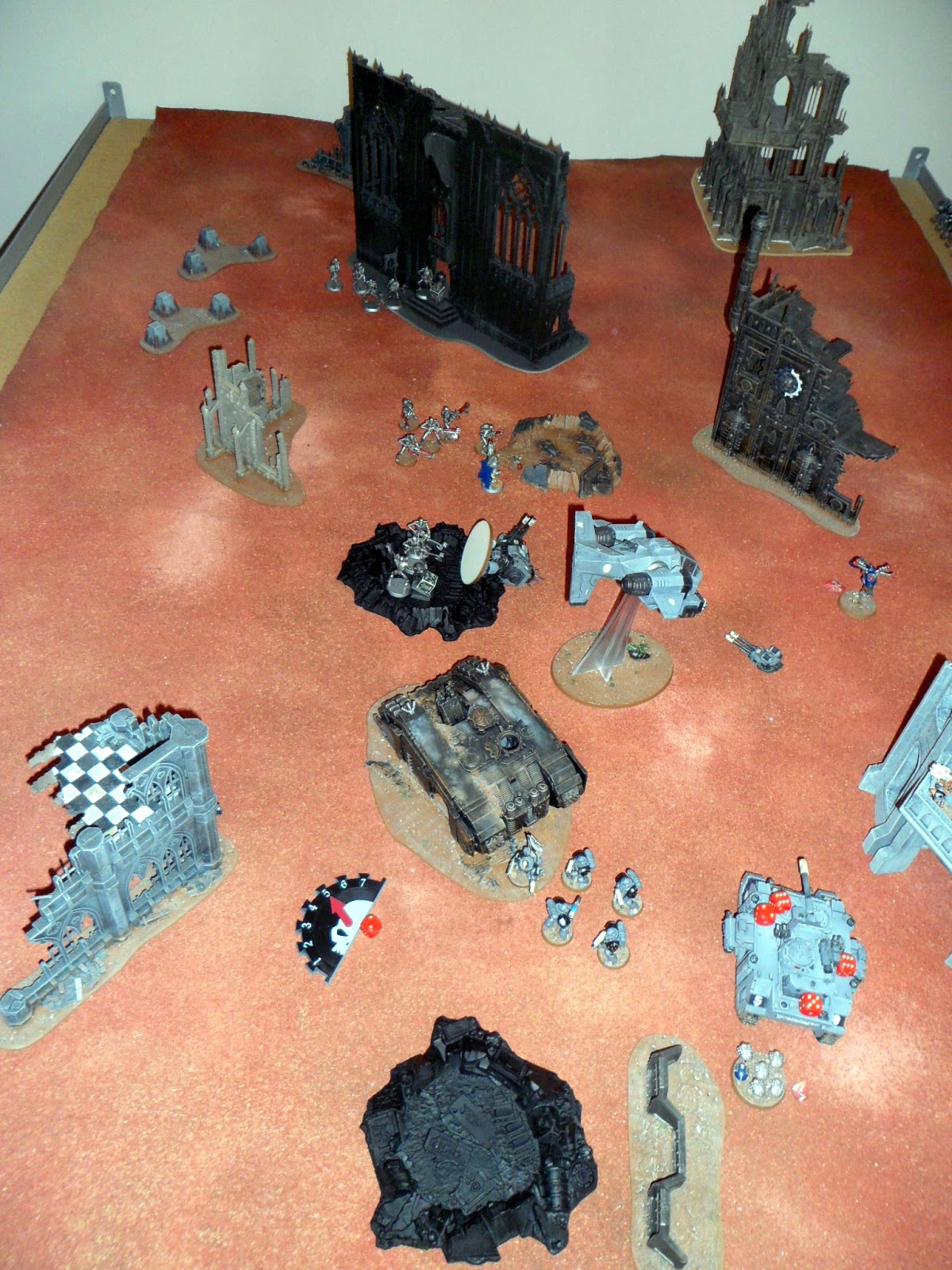 All is to play for if there is a final turn 6 - the Pred and Tac Sqd will kill the Necrons on the Objective in the centre and the Scouts will hunker down in the ruins but alas, the die is cast and a two is rolled - no turn 6, as it stands - Relictors hold one Objective and First Blood. The Necrons hold two objectives and Slay the Warlord. 2:3 a Necron Win and another great battle on the new Games Table!
Posted by Siph_Horridus