Just a quick post with one of my current WIP - Skulltaker on a juggernaut!

For those that were at BW3- you may have spotted him making his first tournament appearance- however he didn't take as many skulls as I was hoping for...  :(  I decided to make my own version of Skulltaker, and converted both him and the juggernaut to get the pose right. 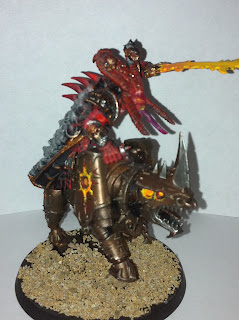 The big problem with the Skulltaker model, is also the best part of the model - the cape. Ideally you would position him so that he was riding the juggernaut correctly with his legs either side, this could be done via cutting into the cape however, this was an option I didn't want to take. Instead I opted to convert him and the Juggernaut with a view to achieving a dynamic look with the cape 'flowing' behind him.

To achieve this, I converted his right leg slightly so that it would nestle into the juggernaut - the next step was to cut the sword away from his right arm, and position it so that he could hold on to the juggernaut's collar via a chain piece. The left hand was cut away, and then turned with the sword repositioned. I love the way the sword arm looks, as if he is sizing up the next skull to be beheaded.

a) make the juggernaut stand out
b) add to the dynamics of the cape
c) to try to capture the essence of the model - if the juggernaut looked too 'static' the flowing nature of Skulltaker would be lost.

The hind left left leg was heavily converted, as it was completely cut away from the 'knee joint' and the 'ankle' and then re-applied using some 'bitz' to bulk out and support the new positions. 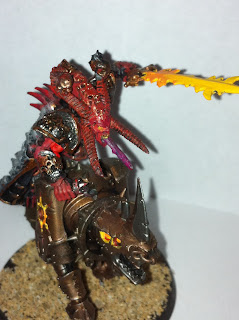 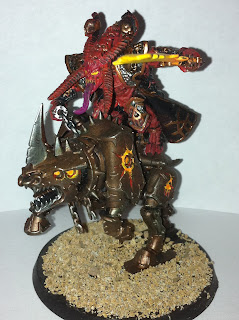 Overall I like the look of the model, and having seen several on various other blogs, I'm quite happy with the finish. I am still in the process of finishing painting up the model, I opted for a metallic juggernaut to contrast with my 'midnight purple' Bloodcrushers. I have tried to create a 'fire' effect both within the juggernaut (eyes, and armour) and Skulltakers sword. I hope you like it! and will post completed pictures once he is finished..
Posted by Lord TITANium Halfpenny