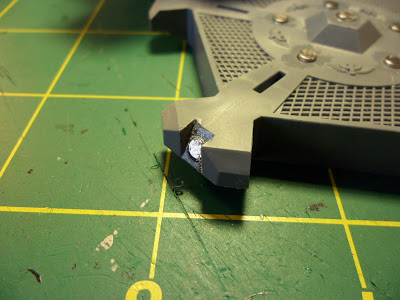 I am currently basecoating a number of Drop Pods however, one drop pod I want to be for a Dreadnought. So, to make it different from the normal drop pods I will leave out the central column and harnesses. However, this gives me an opportunity to use the same Pod as a Deathstorm Drop Pod if so desired.

To enable the swopping of such a large Missile Launcher Assembly, the pod will have to come apart. Above you can see the magnets for the five 'fins' and magnets drilled into the floor for attaching the central Missile Launcher Assembly. The FW Deathstorm pod comes with a sensor assembly for the deckhead and 5 sensors that go into the deck slots - both of these can remain when the pod is a Dreadnought Drop Pod and differentiate it from a standard troop Drop Pod. 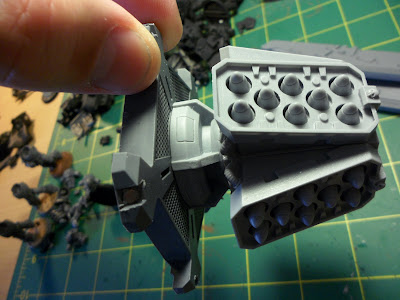 The magnets I am using are quite strong, but the resin is quite heavy so 5 were needed to hold it firmly and also for asthetic reasons when absent, the magnets on the decking will be equally spaced. 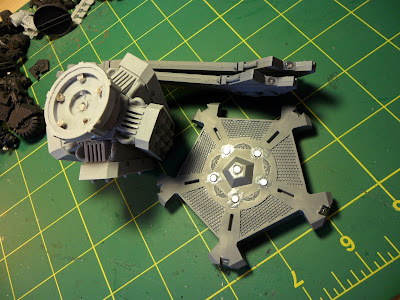 Above you can see the magnets in the fins. Number one tip for magnetizing things is check the polarity of the magnets. Every fin magnet is the same polarity so the final assembly can be attached any which way. The slots on the base where the fins attach also need a little filing so the fins are not such a snug fit - the magnets will do the holding together, not the plastic parts and I want to be able to put together and take apart with ease. 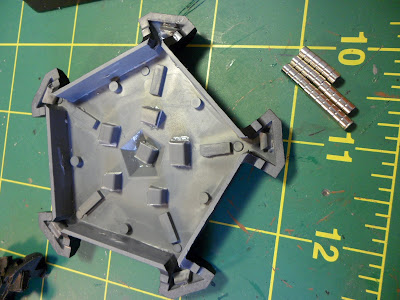 The magnets were glued into place and for extra security, spare pieces of sprue were glued on the underside of the deck, therefore providing another surface to glue onto.

Slowly does it with this project, drop pods have a bigger surface area to paint than a Landraider I reckon! These are currently at the undercoat / basecoat stage. I have some Assault Troops to do first...
Posted by Siph_Horridus