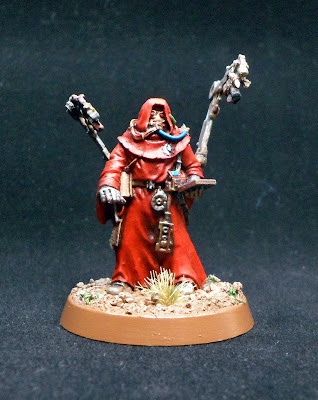 Hi all, I thought I'd add a cheap HQ to the growing AdMech army but looking at my collection I already had a Titan Techpriest from the Reaver Titan and he languished on the display shelf - it was about time he got into the thick of the action, so he was re-based and a few additions of pistons and details then done. 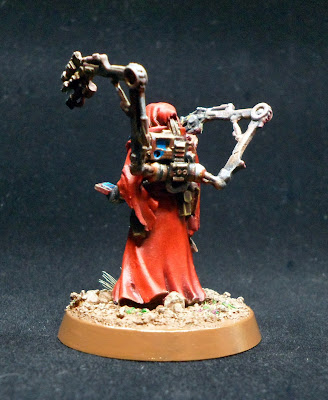 In his first battle he went toe to toe with a Blood Angels Chaplain, admittedly on 1 wound, but managed to strike the Chaplain down and survived the battle! 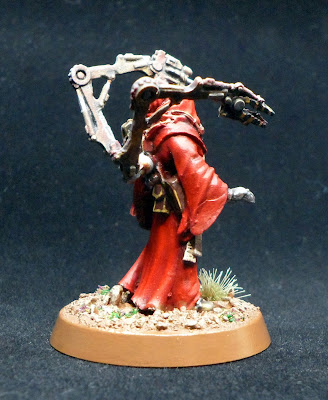 He was already painted in Mars Forgeworld colours by Rich Gray who painted the Titans, so it was a win win and now I have a cheap HQ unit to help repair Mechanicus vehicles during the battle. 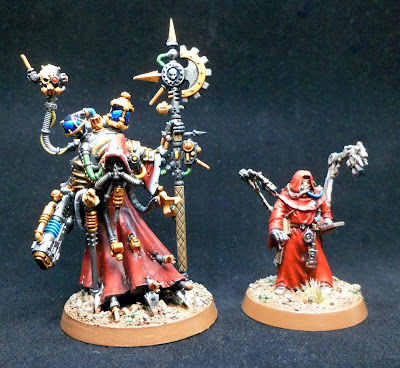 Here he is next to the actual Warlord HQ choice, the Techpriest Dominus dwarfing him in size, but a good cheap extra option. 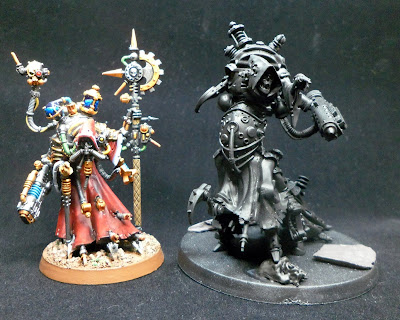 And here is something I'm working on eventually, another Techpriest Dominus using spares from a Belasarius Cawl mini. I purchased Belasarius Cawl in the Triumvirate of the Imperium box set back in Warhammerfest but only just got around to checking the contents and 1 of the 3 sprues was missing (the guns parts), so I contacted GW, provided a receipt from the Warhammerfest transactions - there was a few! - and GW replaced the whole kit, bravo GW! With these leftovers I virtually have a whole mini, just weapon arms and a few gubbins missing, (I have the Ommnissah Axe-not pictured) but I can definitely use them. I removed the crest atop the carapace and trimmed down a few elaborate gubbins, added a spare weapon from the Kastelan Robots and the head from the Renegade Enforcers. Added a smaller 60mm base and a skull to step on, so he will have a smaller battlefield presence than Belasarius Cawl when I finally get around to him!

Cheers, Siph. (5 points for half rather than 10 for a Character)
Posted by Siph_Horridus