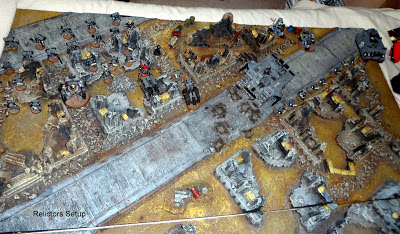 Lord Halfpenny and I had a chance to get a battle in with our Daemons and Relictors. We would use the thematic Battle Board that Lord Halfpenny has as it always looks great - but tactically is not good for shooty armies - too much cover, as I found out. 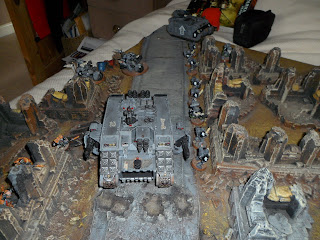 I also chose to bring a Landraider Redeemer, on this board it sucks - only one route and against a Monstrous Creature flying circus - double sucked. I tried to capitalise on Vulkan Hestan's rule with TL flame weapons, but ended up doing the opposite - TL Flamers and Multimeltas are great against Armour and Hordes - these Daemons are neither... 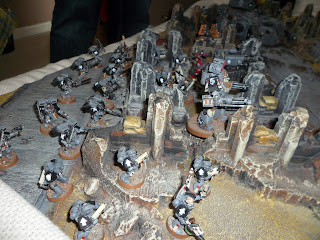 My anti-flyer was in the form of a Mortis Contemptor, a great model and rules, however, this day the Dread did squat all, one wound on a flying Bloodthirster before being stomped by said God of War! 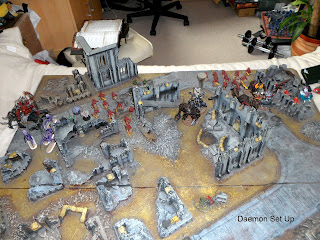 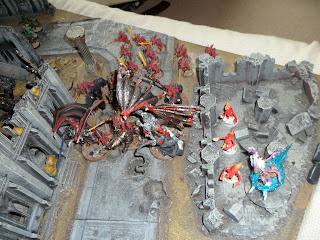 The Bloodthirster is a big fearful beastie, especially when all my CC was in shooty termies and a full squad of Assault Marines.... no match. My bad. I chose shooty over CC as my best bet was to down them with weight of fire - but the board, dice gods and bad luck meant all my shooting was ineffectual and from Turn 1 the flight of 24" meant I had a Bloodthirster in my lines! Doh. 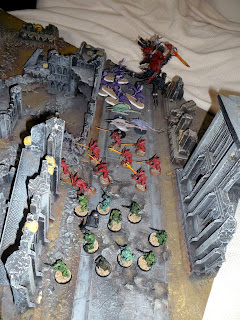 He camped a unit of Plaguebearers on his objective. And a portaglyph added some more troops... It was only 2 objectives, one each worth 3VPs. 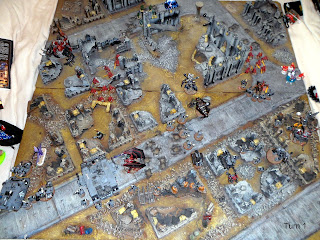 Turn one came and went, the marines were okay but had a Daemon Prince x2, Decimator and Bloodthirster in their lines. It didn't end well. By end of turn 2, it was all over - it was impossible for the marines to win. Their home objective was in Bloodthrister hands and all but one Termie was dead and Assault Marines were wiped out after dispatching the Bloodcrushers and Skulltaker. Vulkan was alive barely and surrounded by Bloodletters after dispatching the Screamers. The Landraider had survived a crush attack from one prince, but had two and a Decimator pressing onto it next turn... even the MM armed Attack Bikes and LasPlas Razorback failed to damage the Soulgrinder, twice. 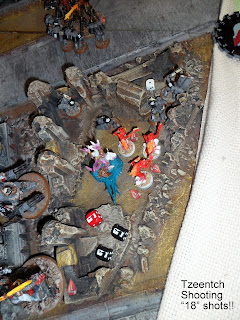 The Deamons were indeed blessed by the dark dice gods, 3D6 shooting from the Herald was a typical example, 3 sixes!! ...and a Combat Squad of Marines dead. Even his invulnerable saves of ++5 were being made! And the Relictors dice, well my typical -. 14 shots with the Mortis Contemptor in overwatch - nil sixes... not to take away from Lord Halfpenny's generalship, it was well played. 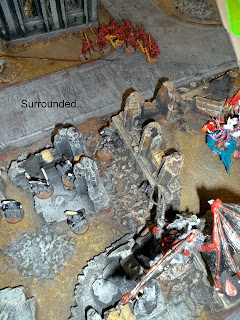 These brave marines near my objective didn't stand a chance... game was over at end of Turn 2. But, even a thrashing was a little fun! What did I learn? Bad choices on a small board equal big losses! I need to buy another StormTalon and bring them all along - I wasted all my firepower on turn 1 trying to clip a Flying MC out of the air to no avail... even the Mortis sucked with Skyfire and 14 shots - some days you just can't win. Still love the game tho :)
Posted by Siph_Horridus