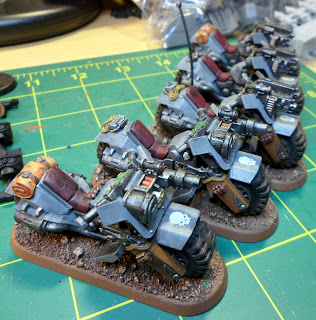 Because I am as slow as a slow thing at painting, I thought I would at least post some progress shots of my 5 Scout Bikes, the bikes are now completed. These shots show the details nicely, they are fabulous models often overlooked by the majority of gamers for the next new UBER unit, however, they are a treat, a hidden gem. Just look at all the nice additions, a plethora of extra kit to add as little or as much as you like. 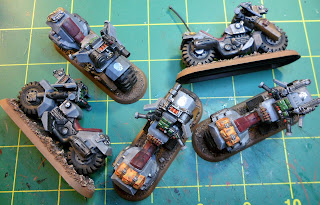 Don't worry about the seat mold lines - they'll be covered by rider.

I've gone for fairly lightly loaded bikes as I have 5 normal SM bikes for a squad of long-range Scouts (old metal riders on normal SM bikes with lots of fuel cans/ravenwing saddlepacks etc.) I've included the holstered Shotguns as they come as standard (why? 12" S4 Assault 2, but Bolters are TL Rapid Fire S4 24"(12") and bikes are Relentless - I guess it's to give options for the Astartes Grenade Launcher armed bikes? 24"(12") Rapid Fire Frag or Krak - nice.) and the kit comes with a Chainsword arm but no codex entry for one, but plenty of Shotgun shells, roll mats, grenade packs, ropes etc. I've also gone for muted decoration with Boltgun Metal Skulls rather than normal Gold, and weapon casings will be black to hint toward the Scout rule - how do you infiltrate a huge motorcycle? ;) 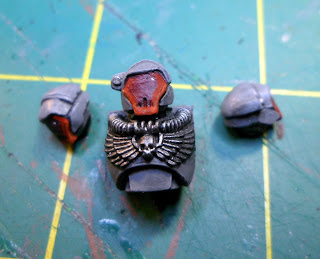 Lastly, to give my superhuman riders some chance of breathing in the dust kicked up by the other squad members, I've used some third party sci-fi helmeted heads (Pig Iron Heavy Infantry) that look great as motorcycle crash helmets! The Sergeant will have a respirator head similar to all my other Scout Sergeant heads and included on the biker sprues.
Posted by Siph_Horridus