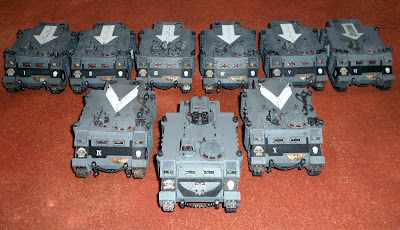 As promised in my last post, here is a shot of all my Battle Company Transport Pool, not including the Landraiders, Predators, Vindicators, Whirlwinds and Drop Pods, just the basic Battle Company transport consisting of Command Squad Razorback, 6x Tactical Squad Rhino's and 2x Devastator Rhinos. The Tactical Markings and Devastator Chevrons are from the FW Space Marine Transfer sheet.

Here are the Devastator Rhino/Razorbacks along with the newest Rhino/Razorback for Tactical Squad VI and the Command Razorback - great for mixing and matching for 40K battles here or at Lord Halfpenny's. I've yet to complete the FW turret I'm converting into a Lascannon/TL Plasma Gun turret. I'll post once done so you can see the simple conversion.

Right back to work and slow progress with those 4 Drop Pods! Thanks for reading.
Posted by Siph_Horridus