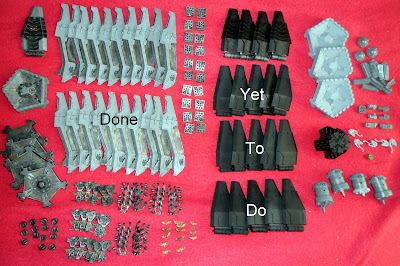 Many moons ago, I started this project to do 4 more drop pods to add to the Relictors Battle Company and accompany this Drop Pod, as you can see I didn't finish the project last Christmas when I posted my basecoat progress (Dec 11) and floundered right about there... but now progress has been made, I've finished all 20 Vanes/Wings, all 30 Harnesses, 20 Motor Blocks, 4 Interal Base Plates, 15 Harness Uprights, 15 Aquila, 14 Motor Vents and 1 Door... 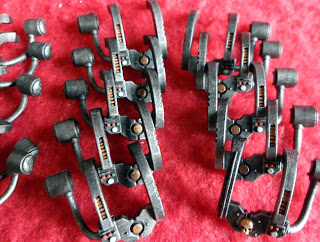 Maybe I'm spending too much time on interior details like the harnesses where most people don't care and just do a quick drybrush at the most, but I am matching the standard of my first Pod so I know it's there if no-one else notices. 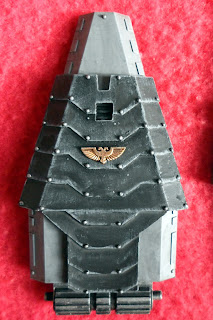 One Pod will have the Deathstorm Missile Launcher fitted and magnetized (see Here for Magnetizing Pods) so it can be played as this or removed and used as a Lucius/Normal Dreadnought Drop Pod instead. To set it apart from the other Pods, it has Chapterhouse Studio Armoured Door facings. A little hot water and rivet removal from the door itself and these went on fairly easily. 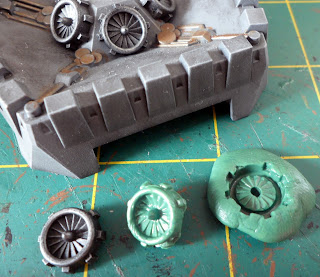 I'm also missing an engine vent, so a greenstuff press mould was constructed around another Vent and later when cured a new one was press moulded - I used Olive Oil as a lubricant to stop the Vent and new vent sticking to the mould whilst curing.

That only leaves whats left in the right hand side of the top photo... 19 Doors, 4 Engine Blocks, 3 Base Plates, 3 Central Columns, 3x Weapons, gubbins etc... I'll post when done, hopefully within less than a year this time!!
Posted by Siph_Horridus